Everyone is feeling the squeeze.

“Mortgage rates are sky high, prices are sky high, and there’s no inventory,” said Mark Zandi, chief economist at Moody’s Analytics. “This may be the worst time in my living history for the homebuyer. It just doesn’t make sense.”

Mortgage rates recently broke 7%, the highest since 2002, and more than double what most borrowers paid near the start of the pandemic.

Between soaring prices and rising rates, the typical home buyer in October paid 77% more on their loan per month than they would have last year, according to Realtor.com. With a national median asking price of $425,000 and a 10% down payment, that works out to an additional $1,117 every month.

Home contract signings fell for the fourth straight month in September, down 31% compared with September 2021, according to the National Association of Realtors. The same month, search interest in the phrase “U.S. Housing Bubble” reached a 15-year high, according to Google trends data. The searches were most popular in Idaho, where the median home price in Boise was $549,900 — an eye-popping 51% increase since September 2019, according to Realtor.com.

The days of record-low mortgage rates are over, but juiced-up home prices have not fallen in kind. And sales are stalling, as both buyers and sellers wait for the other shoe to drop.

To make sense of the current housing market, we spoke with economists, mortgage brokers and real estate agents to plot the course ahead. Much can change, especially with economic headwinds on the horizon, but they all agreed that the market is cooling fast. Home prices are going to drop, just not to the extent some buyers have hoped for. Sellers are going to have to work for their closings again. And renters may finally get a reprieve from surging prices, even as prices stay well above pre-pandemic levels.

How low will home prices go?

Most analysts don’t expect home prices to free-fall as they did after the subprime mortgage crisis in 2008, in part because of stricter underwriting practices, a big bump in home price appreciation and a class of all-cash investors waiting to swoop in when prices dip. But the cuts are coming, analysts said, perhaps as deep as 20% to 30% in markets that saw the most appreciation, particularly in the Mountain West region and the South. Still, most homeowners will have gained some equity over the past two years, even after a slide in home values.

Existing home prices soared 45% from December 2019 to June 2022, the start of the pandemic to the summer peak in pricing, the biggest jump ever recorded in such a short window of time, according to Standard & Poor’s CoreLogic Case-Shiller Home Price Index.

In July, the same index recorded its first month-to-month price drop since January 2019, a small decline of 0.3% — a sign that a reversal could be underway, although prices were still up 15.8% above July 2021.

Morgan Stanley, the investment management firm, predicted that home prices will fall 7% from the peak of pricing in June 2022 to December 2023. Moody’s Analytics expects prices to drop 10%, from June to summer 2024, but if a recession hits, an increasingly likely scenario, prices could drop 20%. In some supercharged markets, like Boise and Phoenix, Moody’s predicts that prices could drop by more than 30%.

Other predictions are less dire. Rick Sharga, an executive vice president of market intelligence at ATTOM, a real estate data company, said he expects prices to fall about 5% over the next six to 12 months before stabilizing.

“This is about weakness in sales volume more than sales prices,” Sharga said, adding that the forces that caused prices to plummet after the Great Recession — irresponsible lending and a glut of supply — aren’t in play. There is very limited inventory for sale, he said, and because the typical homeowner now has a mortgage with a low 3.5% interest rate, few would choose to sell today for fear of facing much higher borrowing costs on their next property.

“People are in wait-and-see mode, because the numbers don’t work out,” said Danielle Hale, chief economist at Realtor.com.

Inventory has shot up since the summer, when mortgage rates started to climb, but still remains far below normal levels, Hale said. Active listings were up nearly 27% in September, compared with September 2021, but still 40% below September 2019, before the pandemic.

What’s going on with mortgage rates?

Today’s rates are far from record territory — some loans in 1981 had an interest rate over 18%.

But in late October, the average 30-year fixed-rate mortgage, the most popular home loan, hit 7.08%, more than double the rate that millions of buyers relied on to calculate their budget. This past week the rate dipped slightly, to 6.95%. In January 2021, the loan rate sank to a record low 2.65%, according to Freddie Mac.

The spike in mortgage rates has largely been the result of the Federal Reserve raising the rate at which banks lend to each other, in an effort to cool inflation. The rate hikes tend to drive up the rate of the 10-year treasury note, a close proxy for mortgage costs.

The rapid reversal has been head spinning, with the added pressure of surging prices.

Tahera Tilson, 44, a nurse educator who was living in New York, bought a one-bedroom condo in the Harlem neighborhood of Manhattan for $399,000 in 2019, with a 3.75% mortgage. After two years of isolation in the pandemic, she decided to buy a two-bedroom town house in Clifton, New Jersey, for $425,000, with a 5.25% mortgage, and planned to sell the Harlem apartment.

But just as she listed the apartment in late spring of this year, the Fed announced plans for more aggressive rate hikes, and mortgage rates soon pushed 6%.

“I got a lot of traffic but no offers at all,” she said about the listing, which she started at $460,000 but soon dropped to $450,000. “It basically came down to the interest rate. That is what was scaring people off.”

Unable to carry two mortgages at the same time, Tilson had to change tack, and decided to rent the apartment out instead. In the rental market, which is especially starved for affordable listings, she quickly found a tenant willing to pay $2,500 a month. The median rent in Manhattan was nearly $4,000 in September, according to Douglas Elliman, a real estate brokerage.

The Fed raised its benchmark rate by three-quarters of a point this past week, its sixth increase this year, and suggested that more increases are coming. Lawrence Yun, chief economist of the National Association of Realtors, said it “may be another year or two” before mortgage rates begin to fall.

The Mortgage Bankers Association, a large trade group, has a more optimistic view, with rates for the 30-year fixed mortgage dropping to 5.4% by the end of next year.

In the meantime, agents and mortgage brokers have dusted off a pre-pandemic slogan: “Date the rate, marry the house.” In other words, buy the house you can afford now, and refinance when mortgage rates dip.

“We’ve been spoiled — 7% is not crazy,” said Maria Kazakos, the senior vice president of sales at Berkshire Hathaway HomeServices Carolinas Cos.

As power shifts to buyers in Charlotte, North Carolina, and nearby markets, she said she is seeing requests for the seller to cover the cost of a lender fee, called points, to reduce the buyer’s mortgage interest rate.

Other buyers are reconsidering adjustable-rate mortgages, or ARMs, a type of loan that drew scrutiny after the subprime mortgage crisis. A 5/1 ARM, for instance, is a 30-year loan with an enticing fixed rate for the first five years, which then resets once a year for the duration of the mortgage, based on the prevailing interest rate and other guidelines. Many are offered with a starting interest rate of around 1 percentage point lower than a 30-year fixed-rate mortgage.

Adjustable-rate loans have gone from about 4% of the mortgage market in 2021 to more than 12% in the last several weeks, the highest share in more than a decade, said Mike Fratantoni, chief economist at the Mortgage Bankers Association. In 2005, when rates hovered around 5.5% to 6%, more than one-third of borrowers had adjustable-rate loans.

The loans, which were widely criticized for saddling borrowers with ballooning debt, are safer today because of regulations enacted after the financial crisis, Fratantoni said.

But borrowers can still get in over their heads if rates are higher when mortgages reset, increasing the overall cost of the loan, said Andrew Pizor, a lawyer with the National Consumer Law Center. He expects lenders to offer even more enticing versions of the adjustable loans in the coming months, as high interest rates slow down the mortgage business.

“But just because they say you can afford it doesn’t mean it’s a good idea,” he said.

What can sellers do?

A few months ago, sellers were turning down bids that were $100,000 over the asking price, said Jasmine Harris, a real estate agent with Redfin in Atlanta. Now, offers are coming in at, or even below, the list price, and sellers are hearing an unfamiliar word: concessions.

“I’m still in the shock of the past two years, so whenever I write an offer and ask for closing costs, I’ve been holding my breath,” she said, referring to the once common practice of sellers paying some of the buyer’s transaction fees. “But I’ve been getting it.”

Even in markets where prices have not declined, sellers are becoming more open to sweeteners, agents said, like agreeing to contract contingencies in the case of financing trouble, or offering to pay for loose ends to lubricate the deal.

There may be some moderate relief for renters, but a return to pre-pandemic pricing isn’t likely, analysts said.

After record levels of demand for rental housing in 2021, there has been a significant slowdown in leasing this year, and price growth is also beginning to slow, according to Jay Parsons, the head of economics for RealPage, a rental housing software company.

Demand for market-rate rentals in the third quarter was negative, meaning there were more people moving out of apartments than into them — the first time this has happened in the typically busy summer months in 30 years, Parsons said.

The slowdown led to the first month-to-month price reduction since December 2020 — a measly 0.2% drop in September.

Still, the national market-rate rent — $1,797 a month — was up 9% from the same month a year ago, in part because inventory remains low.

RealPage predicts that national market-rate rent will rise 3.3% next year, which is more in line with typical rent growth. 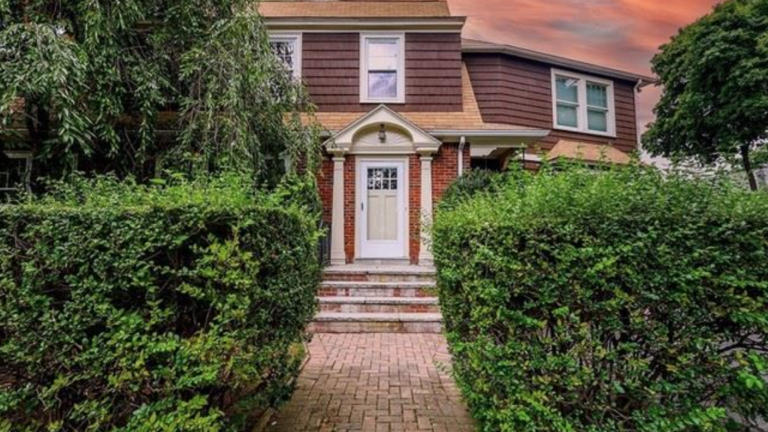 5 Newton listings below the typical price