Before they bring May flowers, April showers often deliver damp basements and stained ceilings. New Englanders are blessed with abundant rainfall most years, enough to soak our soils and to slake our thirsts. But as essential and graceful as it is, water is also a home’s natural enemy — and a sneaky one at that, with multiple modes of gaining entry.

“A lot of building components are water sensitive,’’ said Matt Copeland, founder and principal of Copeland Building Envelope Consulting in Stow — meaning they might degrade and fail if they’re exposed to too much water for too long. Wood framing can rot, for example, and metal hardware can corrode. (One “scary” issue Copeland often sees is wood rot behind a deck ledger — the part of a deck that’s attached to the house — because it wasn’t installed with the correct type of flashing. “I’ve seen a lot of times where that results in pretty severe rot … to the point that you can scoop it out with your hand,’’ he said.) Meanwhile, consistent dampness “might support the development of things that we don’t want, like mold, which can be a health hazard.’’

Water can enter your home in a number of ways, Copeland said, some of them less obvious than a leaky roof. “When air moves around, it carries water with it, and that can move water into places that it shouldn’t be,’’ he said. “Water could also move through solid material by a process called diffusion,’’ in which vapor can pass through solid, porous substances — generally from a warm side to a cooler one.

But when it comes to water damage, the biggest threat to any home comes from “bulk water,’’ Copeland said — think rain, snowmelt, and ground water — which can exploit vulnerable points in the exterior.

“Most of those problems come at intersections between different building components and different materials,’’ Copeland explained: where a wall meets the roof or a window, for example, or where a skylight or vent interrupts the roof.

Searching for the source

If you notice a wet spot or water stain and want to find the source of the leak, these holes in your home’s armor ought to be your prime suspects. “Look at what might be above it or nearby in terms of penetrations or disruptions to the otherwise consistent system,’’ Copeland said.

Unless they’re losing shingles due to age, “roofs usually really only leak at your penetrations, like chimneys, vent pipes, dormers,’’ agreed Matt Kazolias, co-owner of Rainbow Roofing and Siding in Quincy. He recommends checking the flashing around those areas when cleaning your gutters (a critical water-management task in its own right that should be done at least once a year). The most common leak Kazolias sees? “A blowing rain up against the siding that gets in around the windows,’’ he said. “After we get a windy rain, I know the phone’s blowing up.’’

Ice dams are another common source of water damage in New England. These occur on cold days after a snowfall, when heat from the warm house melts snow on the roof, which drips down to the edges, refreezes along the colder eaves and gutters, and backs water up into the roof and walls. “Ice dam leaks are because of poor insulation; it’s not necessarily a poor roof,’’ Kazolias said. A well-insulated attic will keep the rooftop snow from melting in the first place.

Of course, storm runoff, snowmelt, and ground water also can get in through the basement. Fieldstone foundations, commonly found in older houses around Boston, are quite susceptible to seepage, said Jim Keller, owner of Keller Waterproofing in Cambridge. Typically there is mortar between the stone on any visible area of the foundation, but that’s a relatively recent addition in most cases — and probably not what the exterior foundation looks like underground. “It’s basically dirt inside the joints, so the water runs right through the foundation itself,’’ Keller said.

That’s not to say newer houses are immune to water issues. “We’ve waterproofed houses that are six months old,’’ Keller noted. And periodic wetness in an old stone basement is generally a problem only if it interferes with your health or how you use the space, Copeland added — for example, if you want to convert it into finished living space or if you are sensitive to mildew. “It wasn’t ever intended to be really watertight,’’ Copeland said of the typical fieldstone basement, adding that, for better or worse, old houses tend to be drafty and thus dry out fairly quickly.

Water also can muscle its way into your basement through hydrostatic pressure, the force exerted by liquid in a confined space. Think about the pressure against your eardrums as you dive deeper into a pool; any portion of your home that’s below the water table for any length of time is withstanding the same kind of force.

“The closer we get to the ocean, the pressure in the ground is greater,’’ Keller said, and that can push water up through cracks in a concrete slab or other weak points, such as the “cove,’’ where the foundation wall and slab floor meet. “It’s two different materials. It’s like a crack,’’ Keller said.

Homeowners try to plug gaps in the foundation and repair visible cracks using everything from hydraulic cement to caulking to Flex Seal, Keller said, but when that pressure is consistently strong enough to force water in, there’s really no stopping it. “Pressure is going to push through eventually,’’ he said. “You’ve got to relieve it.’’

In most cases — especially in the city, where there isn’t room to excavate outside the house — Keller relieves that pressure by burying pipes in a gravel-filled trench along the inside perimeter of the basement. The pipes direct water to an electric sump pump, which dumps it as far as possible from the house. Otherwise, you’re back to square one.

Working from the outside in

“Drainage is a big issue. That’s where it starts,’’ Keller said. “Water standing around the structure freezes the foundation, damages the wall, creates cracks, breaks in the structure.’’

That’s why a dry basement often comes down to … landscaping?

“The first thing is making sure that drainage flows away from the house. We call it ‘positive drainage,’ ’’ said Rue Sherwood, a landscape designer in Ipswich. That’s easier to accomplish on the blank canvas of a new-construction lot, but many existing home sites can be regraded or landscaped to control excess water and runoff.

“Sometimes it’s a matter of just making it a little bit higher near the house and then lower away from the house,’’ Sherwood said. “Or you can put in drains that catch water and redirect it.’’ A French drain, for example, involves sinking a perforated pipe in a gravel-topped trench that slopes away from the foundation, channeling excess water to a lower point in the yard.

Sherwood prefers using surface or “open-air drainage’’ solutions to piping and pumps when possible, simply because pipes need to be maintained and cleared of clogs. Creating a swale, for example — “it’s like a tiny river,’’ a shallow ditch — can guide water away from the house, she said.

But where to send that water? If there isn’t a lower point in the yard a safe distance from your house (and your neighbor’s), one option is a dry well: basically a big hole in the ground that can collect and hold lots of water, allowing it to percolate slowly back into the soil.

A rain garden — an assortment of water-tolerant perennials, shrubs, and trees planted in a slight depression in the yard — can act as something of a natural dry well, holding excess water until it can seep back into the ground. Sherwood recommended placing a rain garden at least 10 feet away from the house, and likes to include native red maple and tupelo trees if there’s room. But shrubs and perennials can do the job in tight quarters.

“Usually if there’s a drainage problem, it’s a smaller property, and you don’t have a lot of room to play with, so you might do herbaceous plants like milkweed, Joe-Pye weed, and blue flag iris,’’ she said. Sherwood also recommends red or blue lobelias, switchgrass, New England aster, sweet pepper bush, winterberry, pussy willow, red twig dogwood, chokeberry, witch hazel, and swamp azalea. “They need to be able to take a wet spot, but they also need to be able to dry out, because it’s not always going to be full of water,’’ she said.

Sherwood also encourages using rain barrels or cisterns to catch and store rainwater, and recommends extending downspouts so they empty farther away from the foundation.

It’s coming from inside the house

Appliances and plumbing also can create big water problems, said Steve Wilson, senior underwriting manager at Hippo Insurance. An abnormally high water bill can warn of a leak, Wilson said, so you should inspect surfaces around toilets, sinks, dishwashers, bathtubs, and washing machines for soft spots, loose tiles, or discolored floorboards. A homeowners policy should reimburse you if a pipe or valve leaks. “Homeowners insurance typically covers water damage that’s sudden and accidental, as well as internal water damage,’’ he said, “but [it] may not cover damage caused by lack of maintenance, neglect, or flooding.’’

While even a little water can cause serious damage over time if left unchecked, you shouldn’t worry too much about a leak or damp spot, so long as you address it right away. “Generally if you repair something properly, quickly, your risks are relatively low,’’ Copeland said.

And while old houses may wear the scars of a hundred winters and 10,000 rains, they are surprisingly forgiving, he added, due to the quality of materials with which they were built.

“The wood used in construction now is very different than the wood that was used in construction in 1920,’’ Copeland said. “I’ve seen plenty of 100-year-old houses that have terrible water leakage, but there isn’t really significant structural damage because the wood is just much more durable.’’ 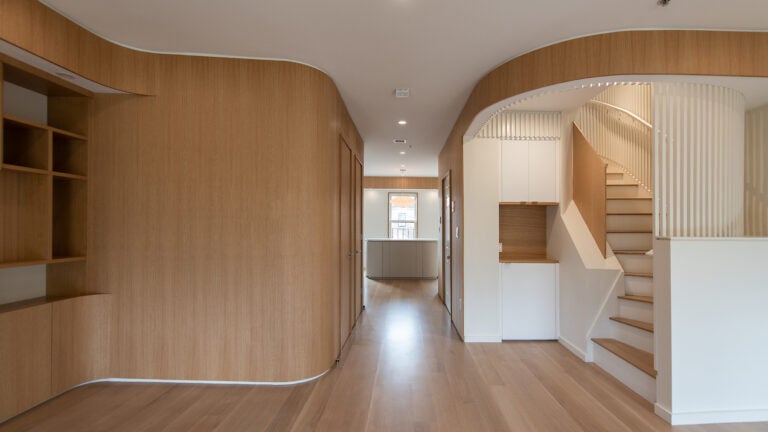