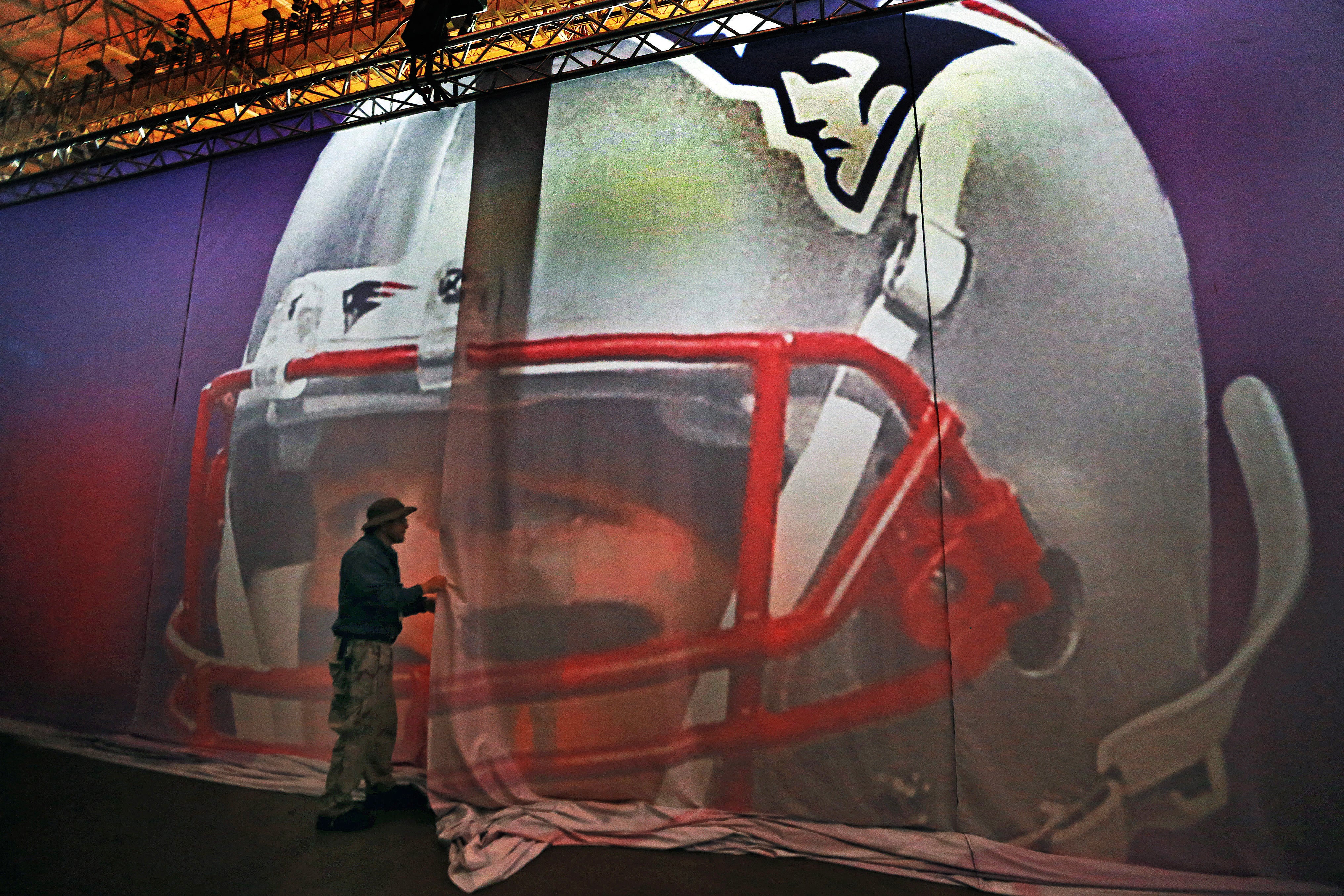 All eyes were on Tom Brady and the Patriots in 2015.

When putting together these annual remembrances of the Boston sports year, rarely do we lack for topics. But this year, the range was even greater than usual. Two general managers — both of whom put together championship teams this decade — were fired or moved on after losing their clout. The Patriots won their first Super Bowl in a decade, and yet that wasn’t even close to the most-discussed story line of their season. The Red Sox, after another last-place finish, signed the top free-agent pitcher on the market, while the greatest pitcher many of us have ever seen entered Cooperstown. The Celtics were encouragingly mediocre, while the Bruins were just plain mediocre. And there was even talk of the Olympics coming to Boston. It’s not that 2015 was the most successful recent year in Boston sports. But it was probably the most unforgettable. Here are the top 10 stories from the seasons gone by. 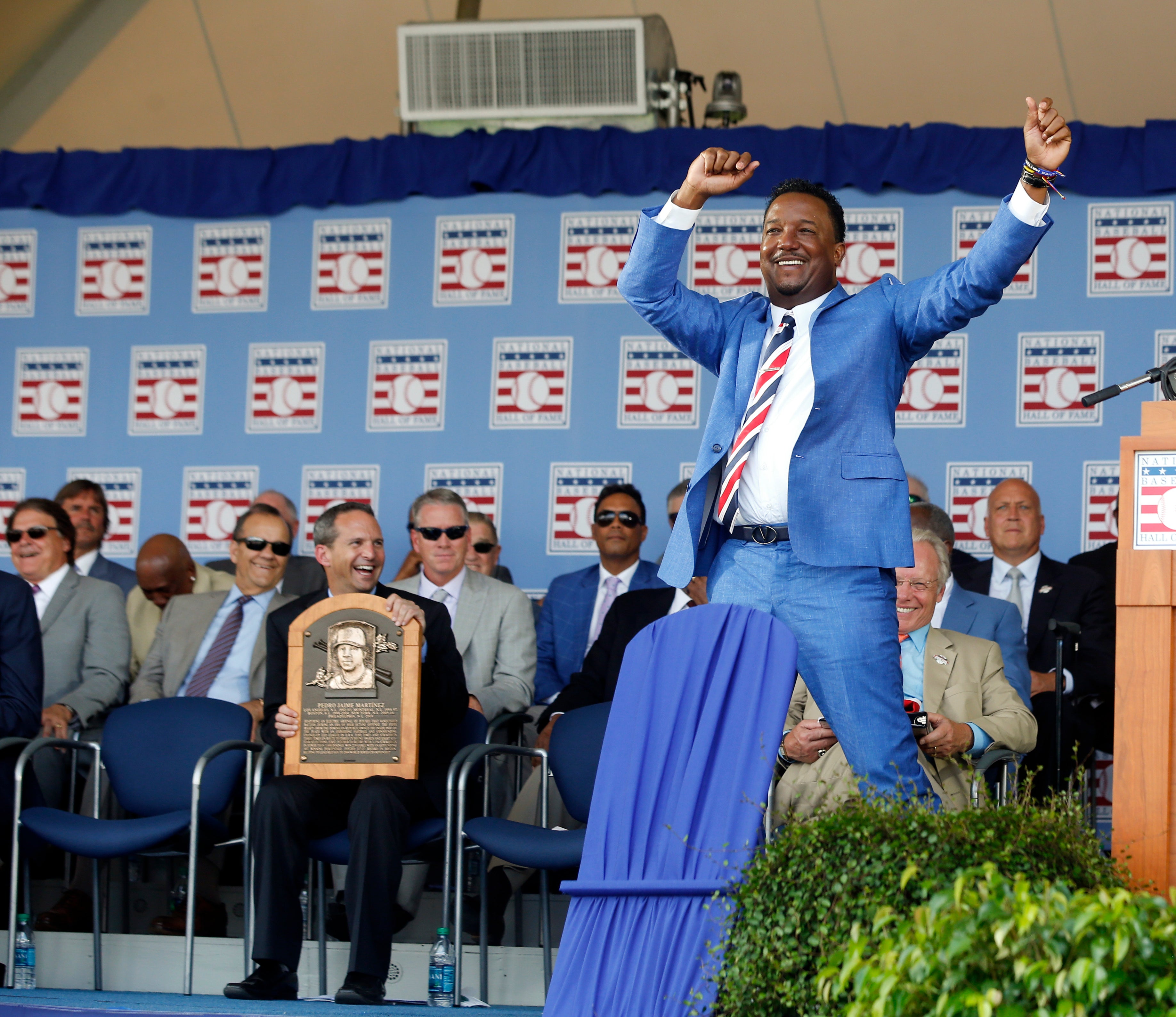 EW: It was no surprise that Pedro Martinez was just as dynamic during his speech in Cooperstown as he proved to be over the course of his Hall of Fame career in Boston. The former Red Sox pitcher played cleanup on the day of his induction into the Baseball Hall of Fame, joining Randy Johnson, Craig Biggio, and John Smoltz in one of the strongest classes in recent memory.

CF: An argument can be made that Martinez at his peak was the most dominating pitcher in the history of baseball. We have the sentimental and electrifying evidence in our memories — the 17-strikeout one-hitter against the Yankees in ‘99, the six innings of no-hit relief in the ALDS that same season, and so much more. There is also plenty of statistical evidence in his favor — for instance, his career adjusted ERA is tied for second-best all-time, trailing only a closer, Mariano Rivera. But no matter where he falls among your all-time best rankings, this much is indisputable: there has never been a more charismatic pitcher. Cooperstown was made for him, and vice versa. 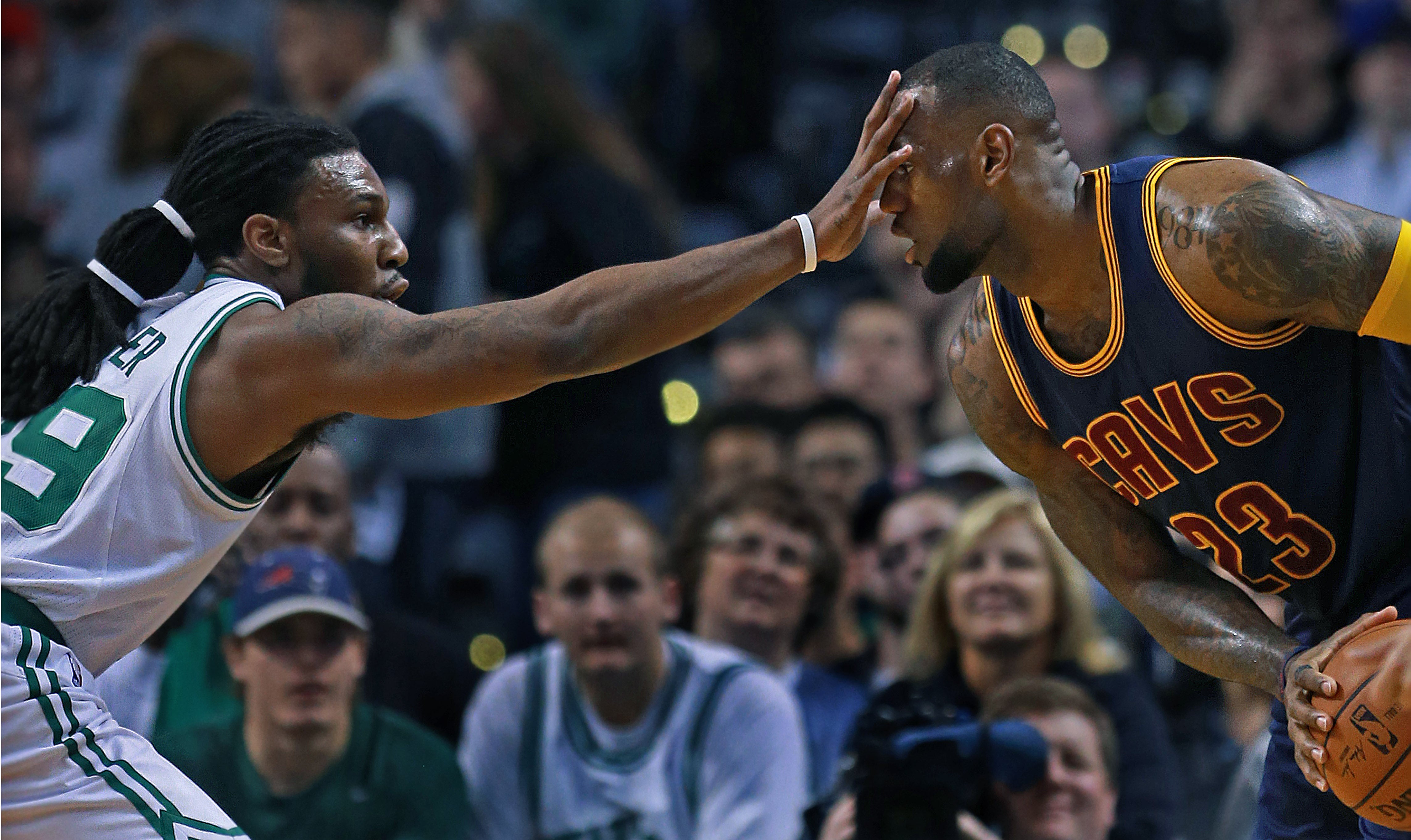 9. Celtics fall to Cavs in playoffs

EW: It will go down in the record books as a sweep at the hands of LeBron James’ Cleveland Cavaliers, but that won’t begin to note the competitive edge the Celtics brought to this playoff series, highlighted — and perhaps marred — by the Kelly Olynyk-Kevin Love kerfuffle in Game 4. It’s the same kind of fire the Celtics brought to their eventual, double overtime loss against the then-undefeated Golden State Warriors earlier in December. Alas, spurts do not a legitimate contender make in the NBA.

CF: It’s not often in Celtics lore that a 40-42 record or similarly mediocre won-lost mark is remembered well. The franchise standard is rather high, as evidenced by those 17 banners hanging from the rafters. But the 40-42 of the 2014-15 season? Hey, we do remember it well. And we should, because it’s evidence of hope and progress. The Celtics, under superb young coach Brad Stevens, closed by winning 24 of their last 36 games, and while there was little hope of taking even a game from the mightly Cavaliers in Round 1, the young, superstarless roster put up a fierce fight. 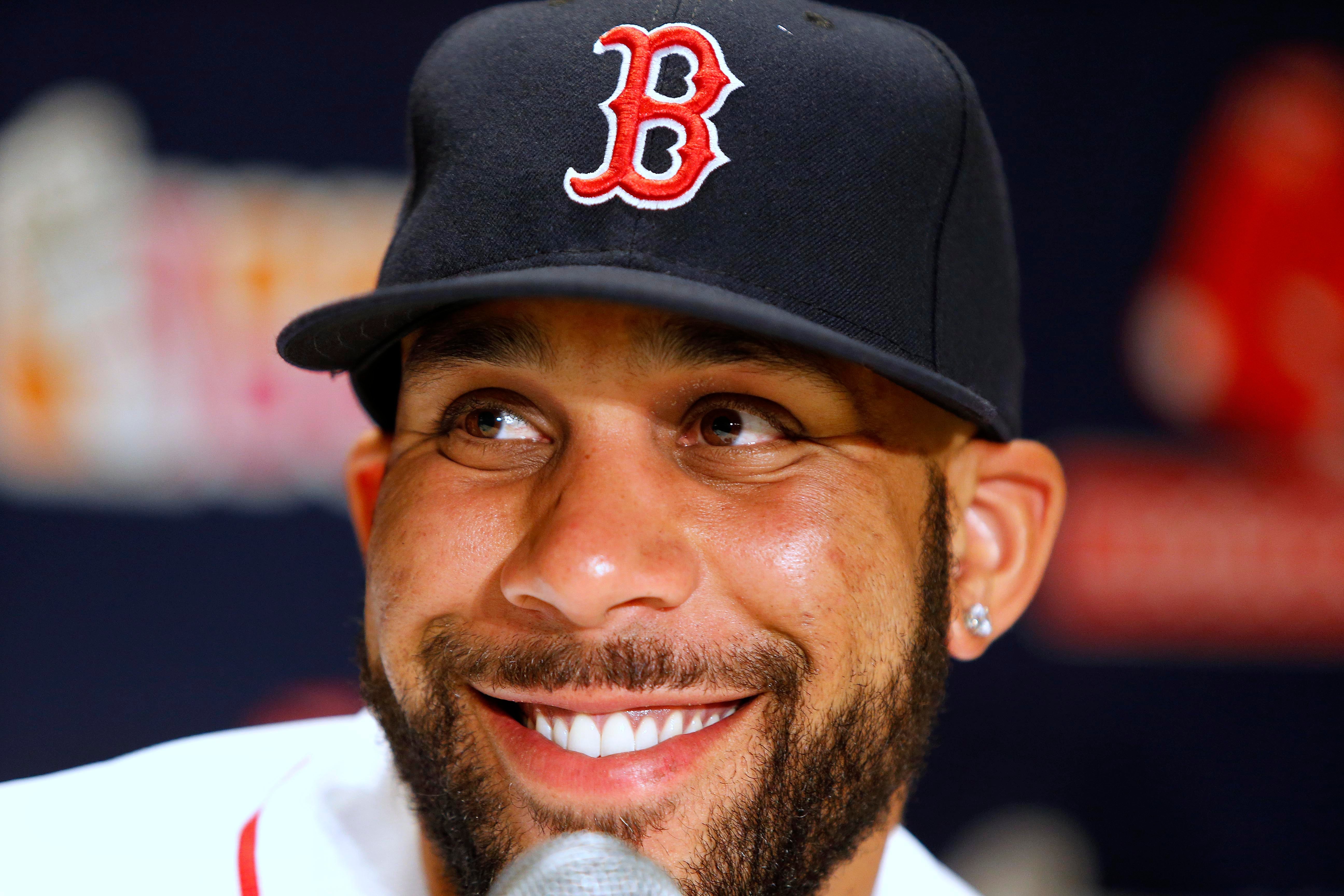 EW: One year after insisting they could get by with five No. 2’s in their rotation, the Red Sox admitted the error of their ways by landing the prized free agent pitcher with a whopping seven-year, $217 million deal. As for John Henry’s reluctance to give pitchers over 30 long-term deals (Price turns 31 next September), made infamous during the negotiations for Jon Lester last offseason, the team’s principal owner summed up his reversal with a seeming, “Meh.’’

CF: The Red Sox got their much-needed ace, even if they were the last ones to realize they needed one. Dave Dombrowski had license to blow away all other suitors for the 30-year-old lefty, and he did with a $217 million deal Price could not refuse. He is a wonderful pitcher, a five-time All-Star who has won one Cy Young Award and finished second twice. All pitchers are risks. This is one the Red Sox had to take. 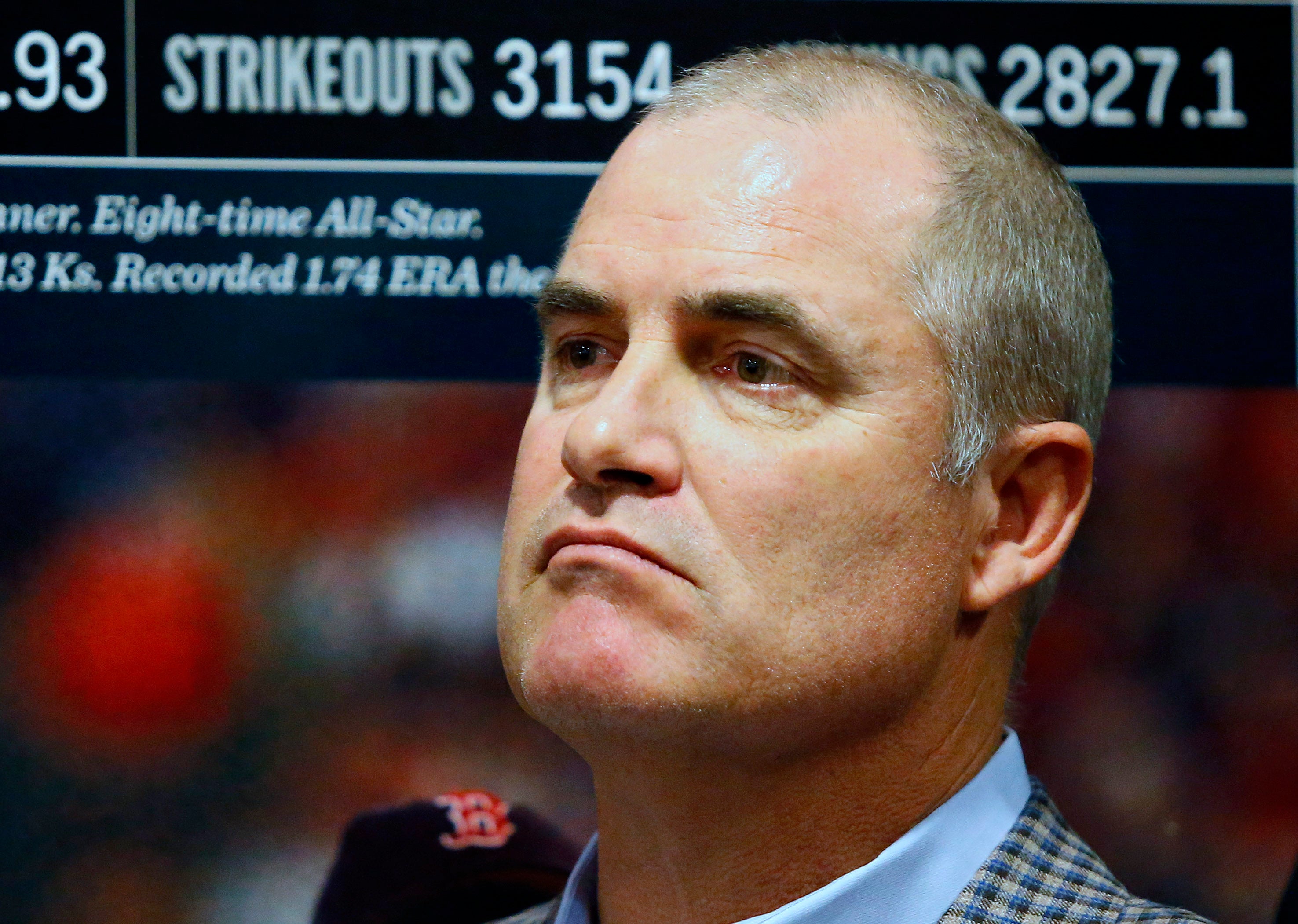 EW: Suddenly, the fact that he was leading the Boston Red Sox to a third last-place finish in four years mattered a lot less. Farrell will return as the team’s manager in 2016, which is the only decent thing Red Sox management could have done, but the leash will — and should — be short should Boston find itself heading toward the dregs of the AL East once again.

CF: In Farrell’s three seasons as the Red Sox manager, the team has finished last twice and won the World Series. With those peaks and valleys, it’s still impossible to say with certainty whether he is a good manager, a poor one, or somewhere in between. But we know this much: Given what he’s gone through, we couldn’t be happier to have more time to find out. 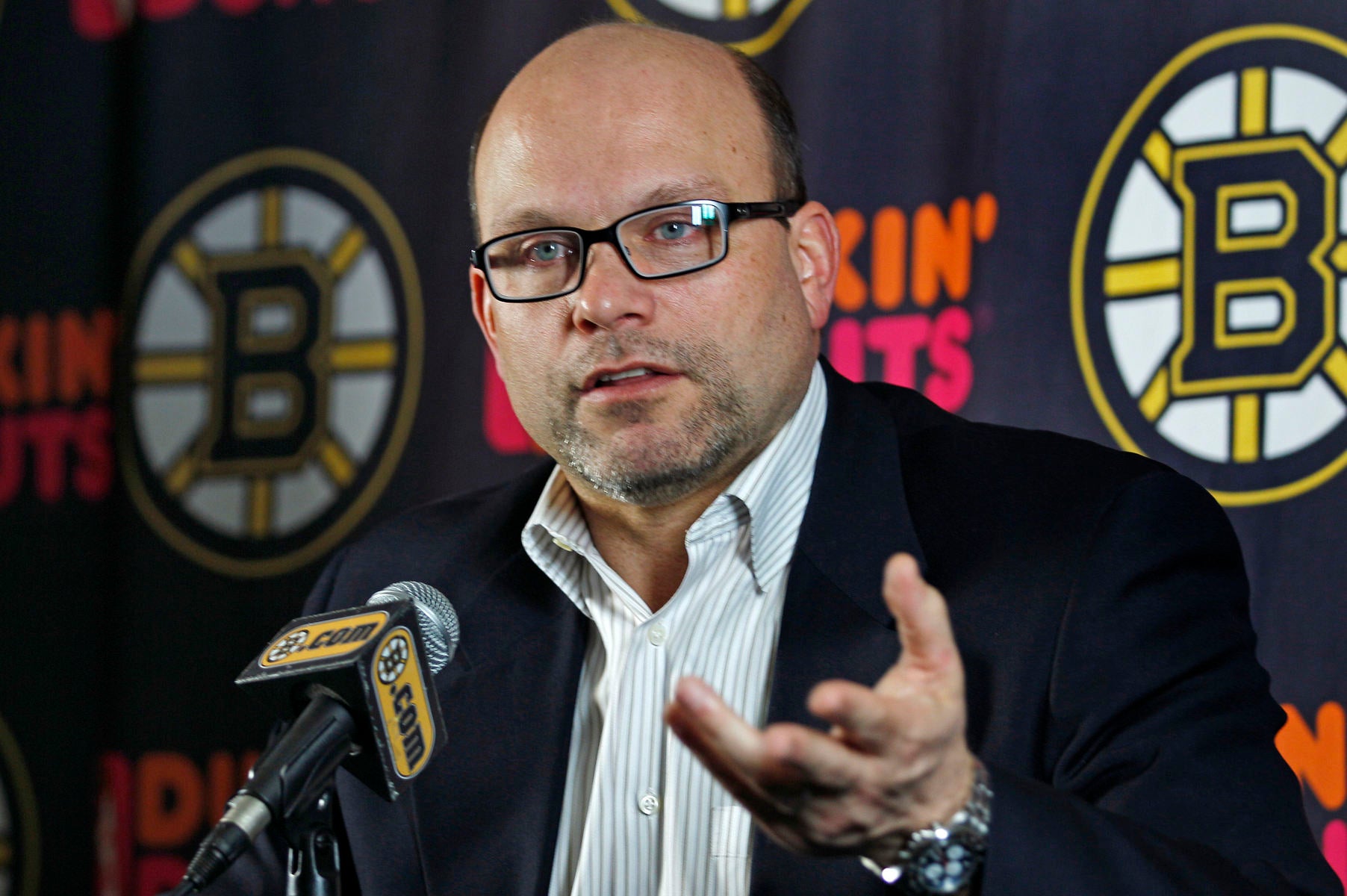 EW: Peter Chiarelli wasn’t dismissed because the Bruins failed to miss the playoffs in 2014-15. He was fired because it’s hard to imagine another general manager in the NHL having more incompetence at grasping the intricacies of the league’s salary cap structure. The fact that the Bruins dug themselves out, somewhat, and have wiggle room to add a piece or two at this season’s trading deadline, is already an achievement for Don Sweeney in his first season on the job.

CF: It’s not often we can pinpoint the precise second that a general manager’s career would never be better, but we can with Chiarelli. In Game 6 of the 2013 Stanley Cup Finals, the Bruins held a 2-1 lead with one minute and 17 second remaining to play. A victory would have forced a Game 7, and the Bruins — with a deep, prime-of-career roster and two promising youngsters in Tyler Seguin and Dougie Hamilton — had a decent shot at their second Stanley Cup title in three years. Instead, one tick of the clock later, the Blackhawks tied the game. Slightly more than a minute later, they won it, and with it the Cup. For Chiarelli, it was all downhill from there, culminating with his firing in April. 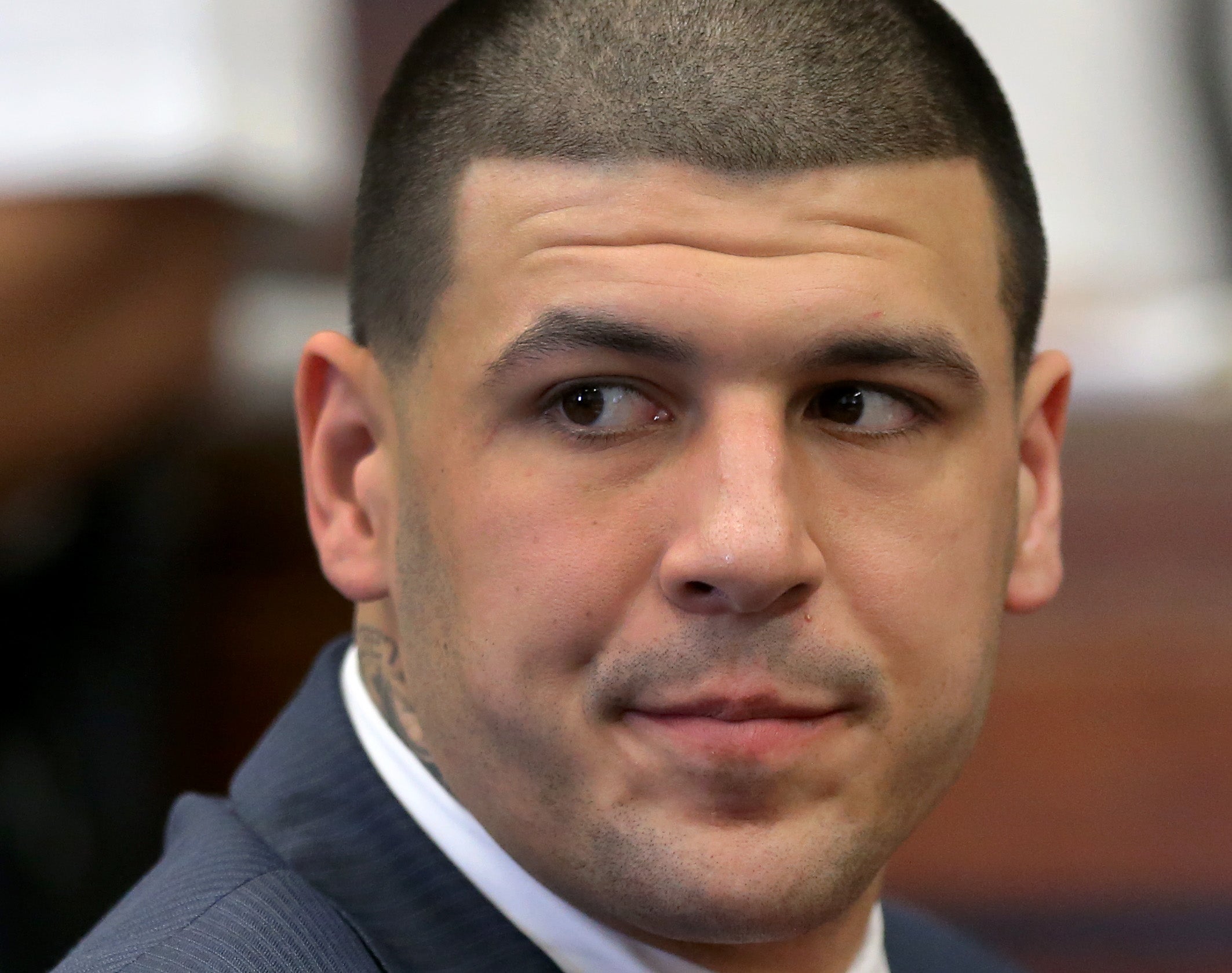 EW: Perhaps the most intriguing aspect of the Aaron Hernandez trial was its failure to captivate us as we previously assumed it might. Perhaps that was because we all had some semblance of presumed guilt already during the two years since Odin Lloyd was murdered, or maybe it was simply the fact that Bill Belichick was never called to testify, taking a bulk of the intrigue away from the proceedings.

CF: Hernandez was a cornerstone Patriot, having signed a five-year extension for $40 million in August 2012 at age 23. Less than a year later, he was arrested and charged in the murder of Odin Lloyd. He was found guilty in April 2015, and currently awaits trial on two other murder charges. Somewhere in that interim, the insane dichotomy of who we thought he was and who he truly was became easier to fathom. The only question that lingers now is this: What else has he done that we never found out about? 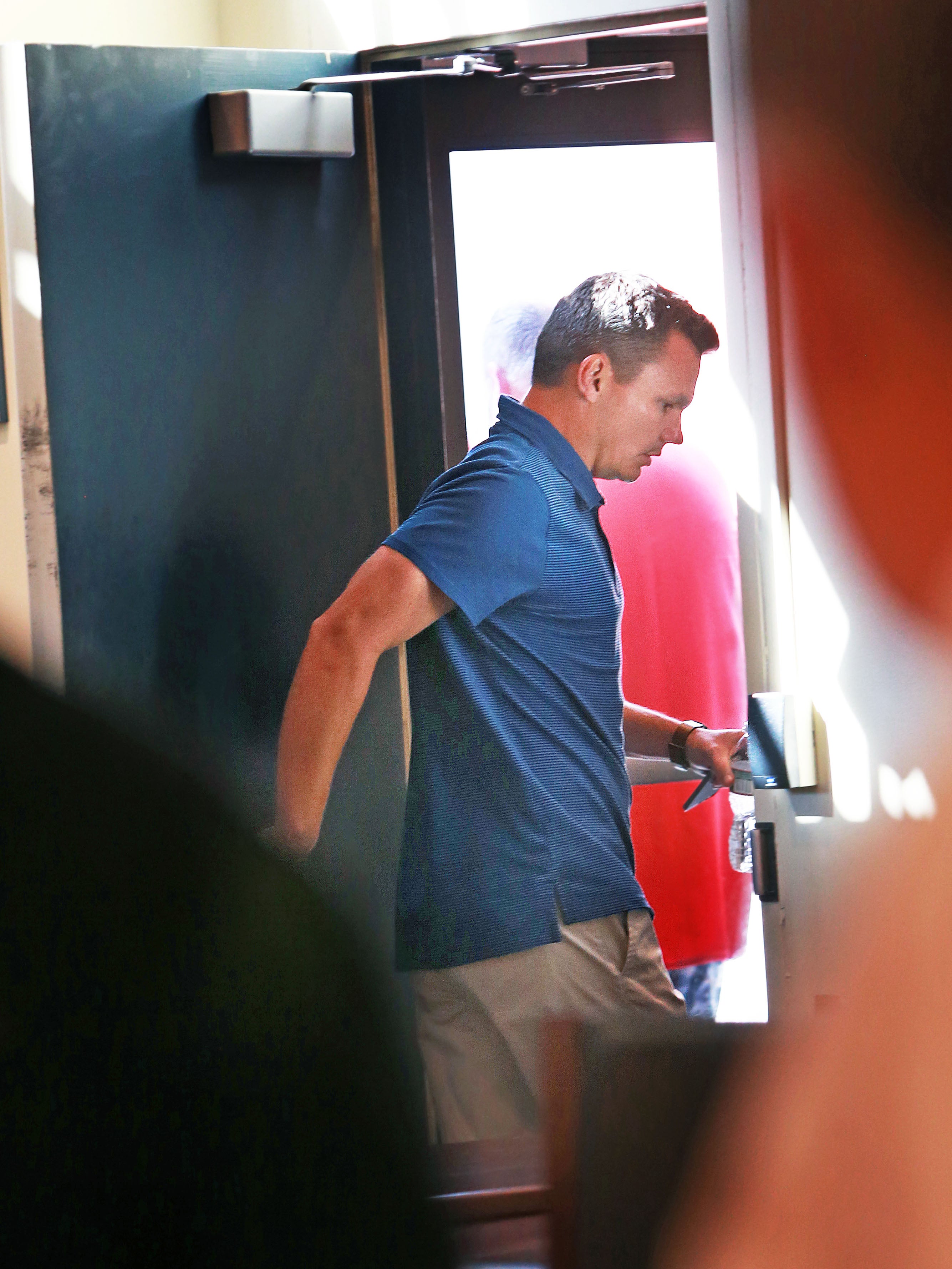 EW: While it’s unfortunate that all the good Ben Cherington did in building a healthy farm system got lost, clearly his mistakes (Hanley Ramirez, Pablo Sandoval, Rick Porcello got how much??) outweighed the positive, even only two seasons removed from a World Series title. In Dombrowski, the Red Sox have someone more tenuous than Cherington, but does he lack the patience the former GM had in regard to grooming talent in the minor leagues? Yet to be determined.

CF: A general manager really has to screw up in an epic way to lose the gig less than two full seasons after masterminding a fulfiling and improbable World Series title. Back-to-back last place finishes and a minimum commitment of $265.5 million to Ramirez, Sandoval and Porcello (I did the math, Wilbur) in one offseason flurry counts as an epic screw-up, Ben Cherington. The Red Sox brought in ex-Expos, ex-Marlins, ex-Tigers boss Dave Dombrowski to run baseball ops, and he’s shown a willingness to make a deal, bringing in David Price and Craig Kimbrel as headliners. So far, so good. Then again, we said the same about Cherington two years ago. 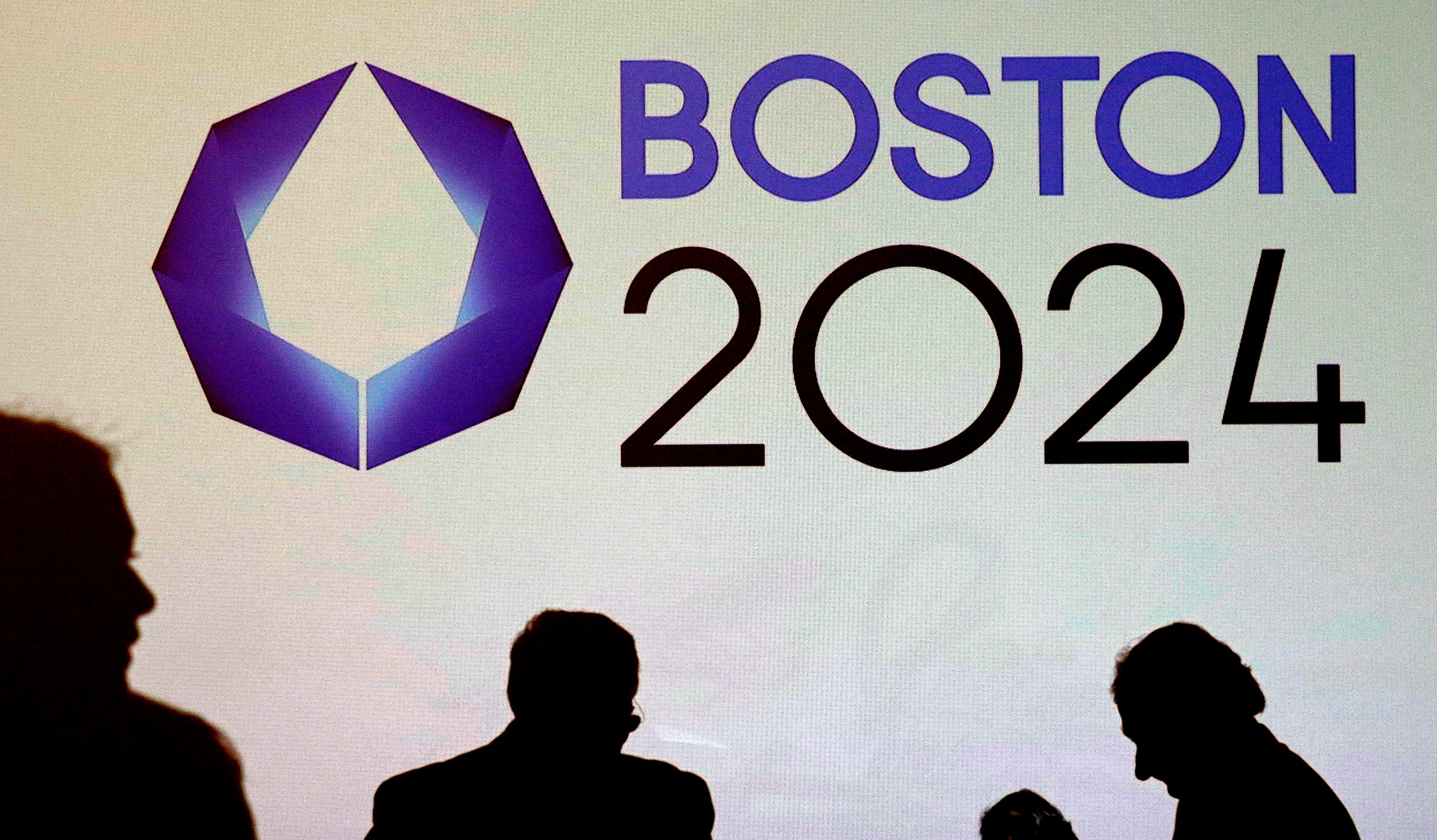 EW: The Olympic Creed reads, ’’The most important thing in the Olympic Games is not to win but to take part, just as the most important thing in life is not the triumph but the struggle. The essential thing is not to have conquered but to have fought well.’’ The Boston 2024 opposition struggled in triumph. It fought well and, in the end, conquered. The fight says plenty about Boston’s spirit, its tenacity, and the long history of Bostonians standing up in the face of adversity and unapologetically standing ground on their beliefs. The Olympic Dream is dead in Boston. The Olympic Spirit? It’s very much alive.

CF: The Olympic Creed, Boston amendment: “The most important thing in the Olympic Games is not to add four hours to the daily commute, which is rarely a triumph and always a struggle on normal days. The easiest thing is to have some damn common sense and let it become some other sucker city’s problem. We will, however, hear your pitch for the Winter Games.’’ 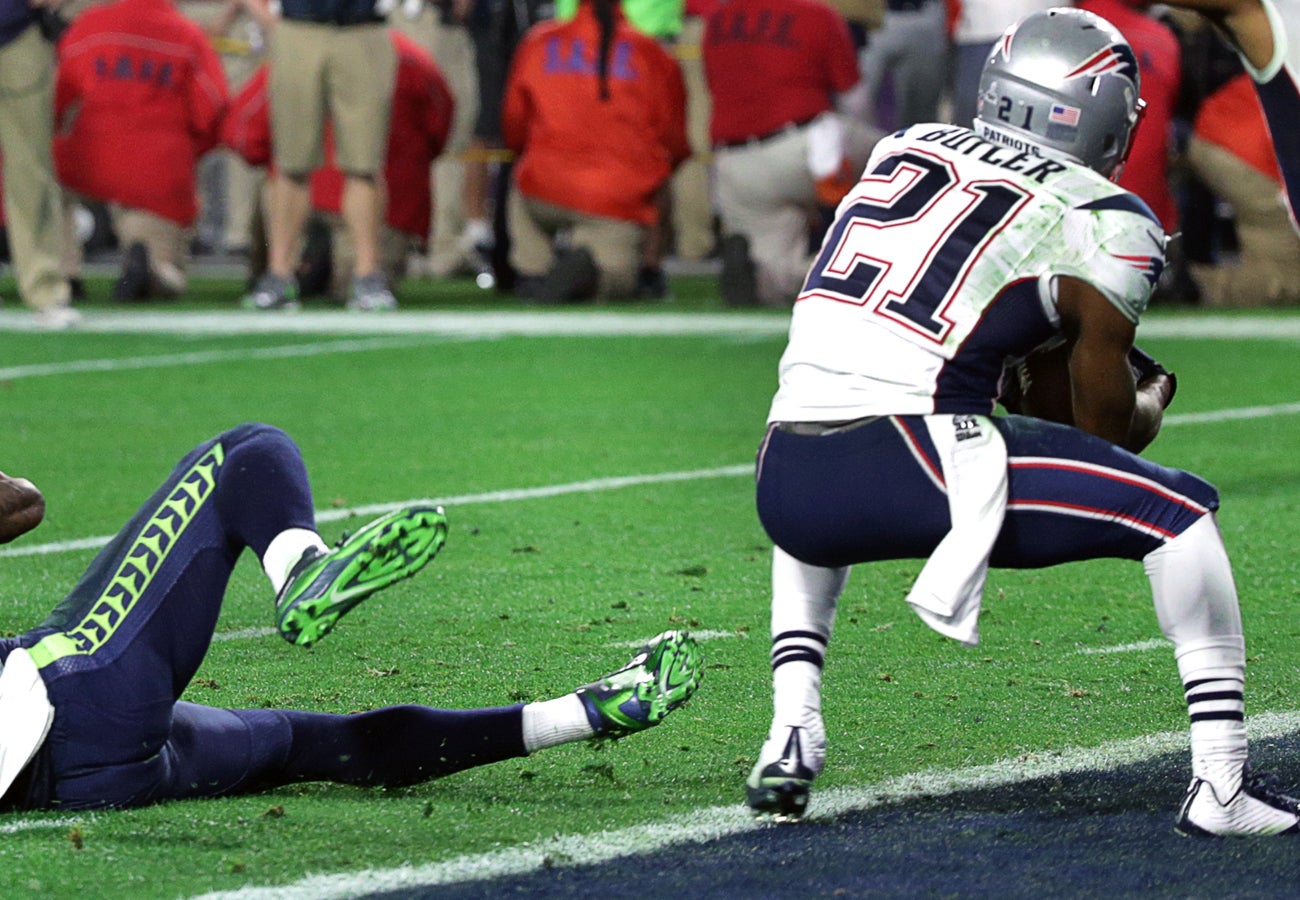 EW: Tom Brady’s legacy was (further) cemented, and a star was born in Malcolm Butler. Not only was Super Bowl XLIX the undisputed Game of the Year in professional sports the world wide, but it also served as the redemptive leap for Brady and the Patriots in the midst of controversy.

CF: I said it in the immediate aftermath of the Patriots’ fourth Super Bowl victory, and I’ll continue to say it and believe it, even as charges of hyperbole fly: Given what was at stake (the championship was the fourth in tandem for coach Bill Belichick and quarterback Tom Brady) and the cultural magnitude of the event (the viewership for NBC’s broadcast was 114.4 million), and the probability of a Patriots’ loss before Russell Wilson released the football (98 percent by one measure), Butler’s interception may well have been the greatest individual play in the history of American team sports. 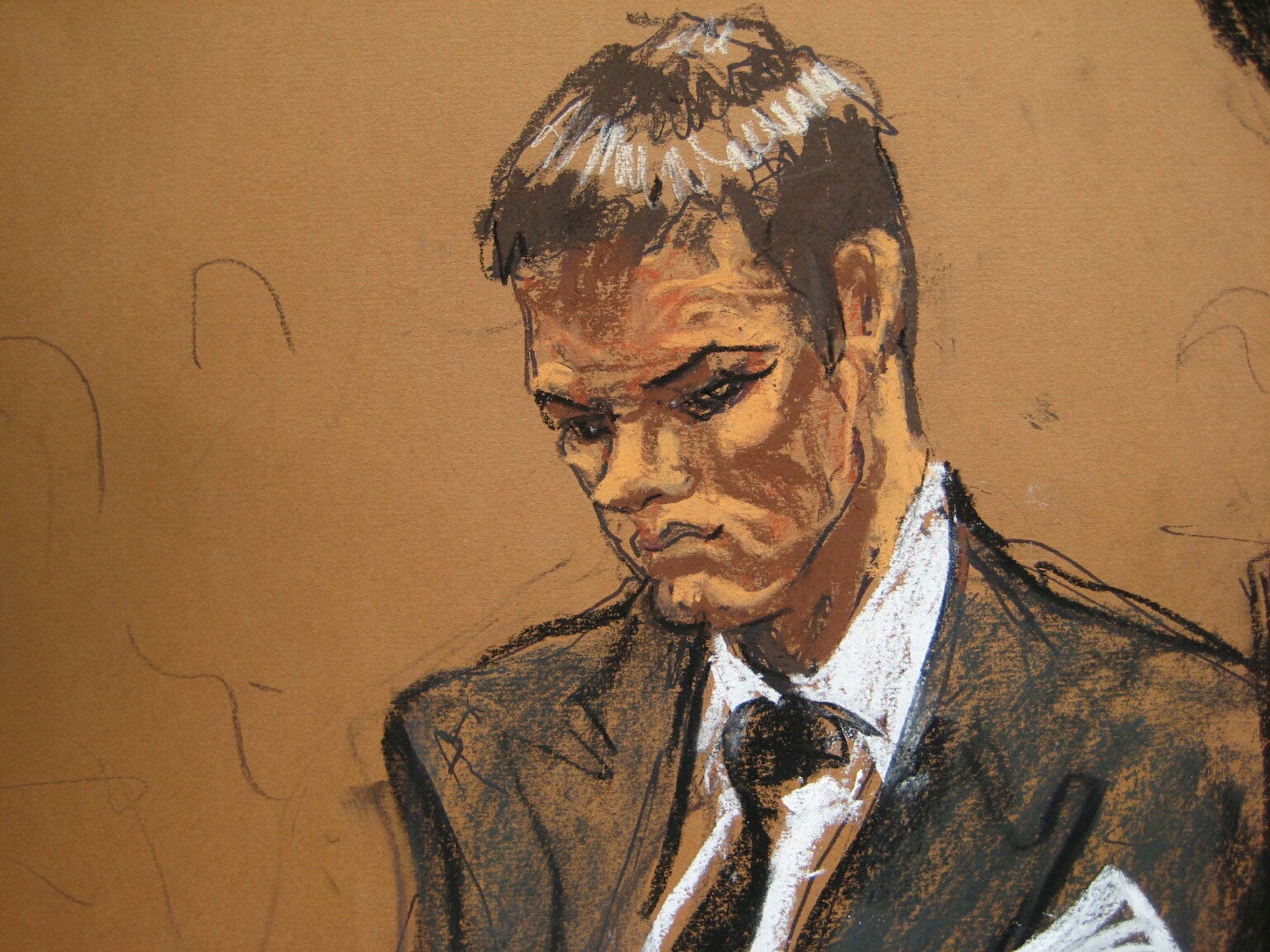 EW: How else to convey the sheer absurdity of Deflategate than to argue it was the biggest story not only in Boston, but nationwide? In his pursuit of the “truth’’ for the “integrity’’ of a game littered with its share of scandals, NFL commissioner Roger Goodell reduced himself to a national punchline, and indirectly created New England’s “Middle Finger Tour,’’ just now reaching its climax with a long list of antagonists who will go down in lore (particularly if the Patriots repeat as Super Bowl champions); from Ted Wells and Chris Mortensen to Mike Kensil and Bob Kravitz. To be continued…

CF: It began January 18 with the AFC Championship Game thumping of the Colts, and it ended … good God, it has not ended yet, unfathomably, with the NFL appeal of a lower court’s dismissal of Roger Goodell’s suspension of Brady scheduled for early in ‘16. What have we learned from this? That Tom Brady knows how to turn vengeance into victories, that the Ideal Gas Law is a thing, and that Roger Goodell’s quest to protect the intergrity of the league long ago proved beyond a shadow of a doubt that he has no integrity of his own.

Sports Q: What's the loudest you've ever heard a ballpark or arena?