The Red Sox dropped their second straight game to the Yankees on Sunday, falling 9-1.

The Red Sox’s offense couldn’t get going throughout most of the game, but the Yankees really pulled away in the seventh inning. Brett Gardner both led off and closed the frame — notching a single in his first appearance and a ground out with the bases loaded in his second.

The Yankees did plenty of damage in between Gardner’s two at-bats, however. Rougned Odor blasted a 418-foot homer that gave the Yankees a 5-0 lead. Brandon Workman entered the game and struggled immensely, walking three batters including two with the bases loaded.

The Red Sox, who don’t have an off day until August, never recovered and fell to 56-38.

Odor jumpstarted the decisive seventh with his homer, but he was a tough out all evening for the Red Sox with two hits and a walk, and he scored every time he reached base.

The Rays won their contest against the Braves on Sunday, closing their gap in the American League East to a half-game. The Yankees are now seven games behind the Red Sox.

1. The Red Sox’s offense has slipped over the last few weeks. Per FanGraphs, in the month of July, the Red Sox (9th for the season offensively) are just 20th in their offensive metric and 15th in team WAR.

“We can talk about the numbers, I think we’ve been hitting .220 as a group since that Friday in Oakland. So obviously we played some tough games on the West Coast, some tough games against Philly, but offensively, we’re not near the team that we are. We know that.”

2. With the MLB trade deadline approaching, Buster Olney raised some eyebrows online by suggesting the Yankees could explore trading Aaron Judge if their struggles continue.

Judge, who missed Sunday’s game on the COVID-19 injured list, is perhaps the most popular Yankees player and one of the most popular players in the league. If he became available, the Yankees would have a lot of suitors.

3. Jarren Duran struggled in his second appearance, finishing 0-for-4 with a pair of strikeouts. He did, however, draw some comparisons from an intrigued ESPN booth: Jacoby Ellsbury by Matt Vasgersian, Steve Finley by Buster Olney, and Trot Nixon by Alex Rodriguez (although, as multiple observers noted, Nixon was significantly slower than the fleet-footed Duran).

Alex Verdugo, who was wired for sound, is a fan of the Red Sox’s outfield prospect.

Later, Vasgersian drew a comparison between Bobby Dalbec and Mark McGwire, so as always, take player comparisons with a grain of salt.

4. Speaking of Dalbec, he replaced Christian Arroyo at first base after Arroyo appeared to injure his groin stretching for a throw. Arroyo recently learned how to play first base and told reporters earlier this weekend that he was fine with the switch, even if it felt a little different.

“At the end of the day, you’re fielding ground balls still and just trying to catch the baseball,” he said. “I don’t think it’ll be too difficult, but again, we’ve got some of the best infield coaches in the league and they’re going to help me any way they can. I can play wherever they need me.”

Cora sounded dejected about Arroyo’s injury after the game.

“Most likely an IL thing,” Cora said. “He just felt it when he stretched. It’s a hard one, right? Because we felt like he was ready, of course, to play first, but he stretches and that happened. It’s a tough one for us, but we’ll bounce back.”

The Red Sox have Franchy Cordero taking reps at first base in Worcester, which could be interesting to monitor. Cordero seems to have found his groove at the plate and is batting .344/.425/.573 in Worcester.

5. The last time the Red Sox walked five batters in an inning was 2014, according to the ESPN broadcast. During the Red Sox’s disastrous seventh, Workman handed out three walks while Darwinzon Hernandez added two.

The Red Sox got a run back — their only run of the game — with the heart of their order batting in the top of the eighth. If Red Sox pitchers had kept the Yankees off the board in the seventh, it’s hard not to wonder what might have happened in a strange contest. 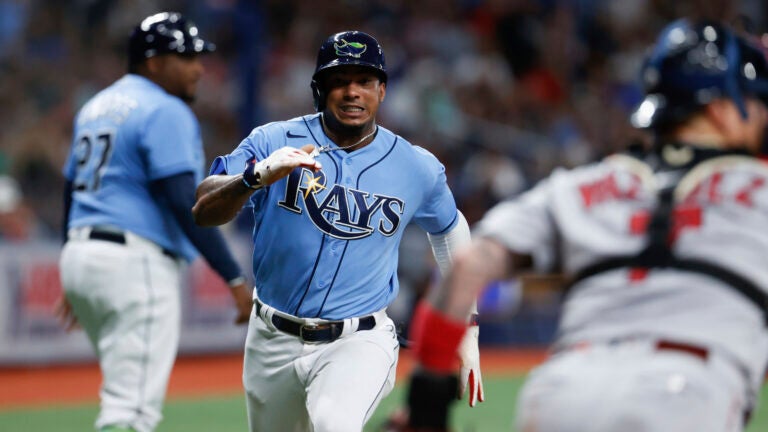