Beating the Buffalo Bills on national television Monday night to firmly take hold of the top spots in the AFC East and the conference as a whole was reward enough for the Patriots this week.

But the win also did something of note: it pushed New England’s surprising midseason win streak to seven games.

Bill Belichick’s teams have been no stranger to prolonged bouts of winning during the Patriots’ dominant run over the past 20-plus years. But once you hit a streak of seven games or more, the air starts to get rarer.

More importantly: the Belichick-coached teams that dominate to this degree traditionally tend to bring home some notable hardware.

A look at Patriots win steaks of the past and where those seasons ended up suggests this year’s squad is in very good company.

This bracket is the last one that contains any Patriots teams outside of the Bill Belichick era.

The ’78 team led by Steve Grogan and the ’86 squad quarterbacked by Tony Eason both went 11-5 and won the division. The 1994 team, which featured a second-year Drew Bledsoe, finished the season on a 7-0 run to seize an unlikely wild card spot. But all three squads bowed out in the first round of the playoffs.

2012 saw Tom Brady put up the second-highest single-season yardage total of his career as the team won the division with a 12-4 record. They closed the season 9-1 with one loss to the San Francisco 49ers breaking up their streak. But the Patriots lost to the eventual Super Bowl champion Baltimore Ravens in the AFC Championship game.

After a 2-2 start in 2014, New England ripped off seven consecutive victories and only lost two games the rest of the way. When the dust settled, the Patriots’ dynasty had returned after a 10-year absence thanks to this:

How did the 2010 Patriots win 14 games, with an eight-game streak thrown in there for good measure, win the AFC’s No. 1 seed, have Tom Brady earn MVP honors and yet not win a playoff game? The simple answer: even the Jets have to get theirs sometimes.

Yes, 2010 was the last time the Jets handed the Patriots two losses in a season, knocking New England off in Week 2 and then stunning the football world by eliminating their AFC East big brothers in the divisional round of the playoffs. New York has won a grand total of two games against the Patriots since then.

Seven years later, the Patriots looked poised to repeat as Super Bowl champions with yet another 13-3 finish and a gutsy comeback win over Jacksonville in the AFC title game. But not even Brady’s Super Bowl record 505 passing yards could save New England from Nick Foles.

Every team on this list from here on out made the AFC Championship game at least.

Starting with the Jets in Week 10 (coincidence?), the Patriots rattled off 10 straight wins, including the divisional and conference championship rounds of the playoffs. This was the peak of the two-tight end heyday with Rob Gronkowski (1,327 yards) and Aaron Hernandez (910 yards), as well as Wes Welker (1,569 yards), dominating from the lot.

Of course, everyone only remembers the pass Welker dropped, as well as the ridiculous sideline shot from Eli Manning to Mario Manningham, in the Super Bowl loss.

The 2016 Patriots started their winning streak a bit later in the season as well, kicking things off in Week 11 with a 30-17 defeat of the 49ers and carrying it all the way through that 28-3 comeback in the Super Bowl over Atlanta.

10 games into Brady’s nascent career as a starter, the Patriots were sitting at a very pedestrian 5-5 after a loss to the Kurt Warner-led St. Louis Rams.

What happened from there birthed legends: New England rattled off a dozen wins in a row, including the improbable “Tuck Rule/Adam Vinatieri” game in the divisional round against Oakland, and polished off the season with revenge against the Rams.

Brady and Belichick got the first of their many championships together and set the blueprint for winning with a first-year starter at quarterback to which the Patriots now refer.

Not a bad follow-up to that Super Bowl shocker against the Seattle Seahawks, right?

The 2015 Patriots picked up right where the last season left off, reeling off 10 straight wins to start the season. It took five quarters for the Brock Osweiler-led Denver Broncos to finally put a blemish on their streak in Week 12, which had hit 13 games thanks to the three postseason wins from the season prior.

Those same Broncos — this time with the game-management version of Peyton Manning — ended New England’s season in the AFC Championship round.

It’s probably not surprising that the next 13-game winning streak the Patriots put together also involved a Super Bowl title — the last one the franchise has won to this point, in fact.

New England won its final two regular-season games in 2018 over the Buffalo Bills and New York Jets, ground out a close call against an ascending Patrick Mahomes and the Kansas City Chiefs in the conference championship, and then beat poor Jared Goff to a pulp in Super Bowl LIII.

They celebrated by kicking off Tom Brady’s last year in New England with an 8-0 start, though that season obviously ended in disappointment.

The second-greatest season in NFL history. A historic campaign by Tom Brady, Randy Moss and a Patriots team that finished 2007 with just the second perfect regular season of all time, matching the 1972 Miami Dolphins.

In the end, the most enduring memory of that almost-perfect season might be Eli Manning escaping what should’ve been a sack and launching the ball to David Tyree on a prayer.

“I’m watching the ball flutter in the middle of the field. Rodney Harrison is right there on the play, goes up, hits the ball, hits the helmet, and the guy catches the f****** ball on his helmet,” Brady recalled on the latest episode of his show “The Man in the Arena.”

“And right then and there I was like, ‘They’re going to score a touchdown.'”

The Giants did indeed score, and Brady couldn’t quite connect on a deep ball to Moss to potentially set up a game-tying field goal.

Only eight teams in NFL history have ever repeated as Super Bowl champions. None of them did what the 2003-04 Patriots did, though.

From October 5, 2003 to October 31, 2004, New England did not lose a single football game, including the playoffs. If you’re counting at home, that’s 15 straight wins to close out the 2003 season, ending with a Super Bowl victory over the Carolina Panthers, and six straight wins to start 2004.

What did the Patriots do after their incredible cross-season streak was snapped? Go on another one, of course. That one only lasted six games, though. Hardly the stuff of legend.

Put another way: New England went a ridiculous 28-4 in the 2003-04 seasons and didn’t lose a playoff game in either year.

That’s about as dynastic as it gets. 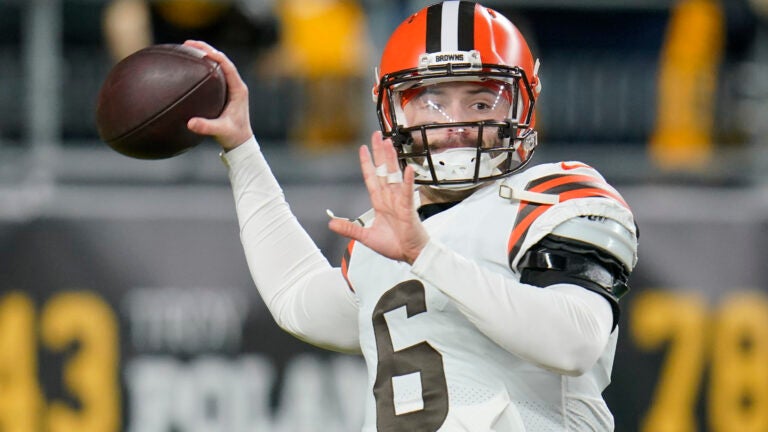