That rookie wall has been hitting really hard for Mac Jones as the Patriots approach the playoffs this weekend.

After 13 games of borderline top-10 quarterback play — an outstanding accomplishment as a first-year player — Jones has played like, well, a rookie.

In his last four games, he has the same number of turnovers (six) as touchdowns, tossing five interceptions and losing a fumble. During that time, the Patriots stumbled through a 1-3 record after their late bye week, including a loss to the Buffalo Bills they’ll be playing on Wild Card Weekend.

The Bills’ defense, along with those of the Indianapolis Colts and Miami Dolphins, made life hard on Jones to the point that confidence in the rookie’s ability to lead New England to a playoff victory has waned a great deal since Sunday night.

If Jones and the Patriots’ offense want to turn things around and surprise the Bills, adjustments have to be made. Fortunately, at least three of them on Jones’s part might be easy enough to make right away.

Stop zeroing in on Jakobi Meyers.

When the Patriots are facing third down and spread the field, everyone knows who Jones wants more than anyone: Meyers.

The third-year receiver has 19 third down-converting catches on this season, putting him in a three-way tie for 10th in the NFL, according to STATS.com. Seven of those catches have come with three or fewer yards to convert on third down.

About 23 percent of Meyers’s receptions this year — almost one of every four — have come on third down. What’s more: He’s gained 420 of his 866 receiving yards between the numbers, with almost all of them coming between 0-20 yards.

Teams have been wise to that for a while and have employed various strategies for stopping it. Back in Week 3, the Saints resorted to bracketing Meyers’s familiar crossing routes, with Malcolm Jenkins (27) latching onto Meyers underneath and Marcus Williams (43) playing the receiver over the top in this example.

A film breakdown by CLNS Media’s Evan Lazar highlighted how the Bills intentionally had their slot cornerbacks play with inside leverage to cut Meyers off from the middle of the field, taking away his bread-and-butter routes on third downs.

Then, the Dolphins’ Xavien Howard peeled off of his Cover 2 flat coverage assignment to swipe Jones’s third-and-1 throw intended for Meyers and take it back for a score just a few days ago. That’s not a coincidence.

Though Meyers has continued to put up numbers even with extra focus on him, Jones’s over-reliance on his favorite receiver is costing the Patriots in key situations. The young quarterback needs to get Hunter Henry, Jones’s primary red-zone target, and Kendrick Bourne more involved when it’s time to move the chains.

Additionally, though, New England must also adjust to keep Meyers open in those situations, which includes drawing up more out-breaking routes and targets down the field. He had two deep catches for 67 yards in Week 18, which is a welcome change.

Be more aggressive — at the right time.

The rap on Jones is that his lack of elite arm strength limits his deep passing ability and makes him unwilling to challenge defenses down the field.

While the first part is true to an extent, the second might be less so. Jones is actually tied for 15th in the NFL in average depth of target with Kyler Murray (8.3) and is 18th in passing attempts over 20 yards (58).

The key for Jones is when he decides to push the boundaries and who he’s throwing to when he does it.

For one thing, the rookie seems more comfortable throwing the ball deep when it’s his first read, especially if he recognizes man coverage. His first big throw to Meyers for 28 yards is a good example of that; Jones knew his receiver had a one-on-one outside and trusted him to make a play. (That play is also an example of Meyers using the threat of his usual inside-breaking routes to fool the defense.)

His corners and fade routes toward the sidelines are all generally well-placed and have good touch, even if not all of them end up completed.

It’s when he tries to throw late down the field that he typically has trouble. His second deep ball to Meyers against Cover 2 hung up in the air and almost allowed the safety to make a play on it — if not for an outstanding catch by the Patriots receiver. On other occasions, he’s had balls knocked down or picked off because his deep throws just don’t have great velocity.

But he also has passed up one-on-one mismatches to guys like Agholor and even Jonnu Smith, who are arguably his two most dangerous mismatches down the field. Smith, for example, only has 10 targets all season of longer than 10 yards despite being bigger and more athletic than most linebackers and safeties covering him. Meanwhile, Meyers, whose lack of deep speed and leaping ability makes him a less-than-ideal deep target, has the second-most 20-plus-yard targets on the team.

Jones doesn’t need to play like Tom Brady, who has the most deep attempts in the NFL this season, to be effective. But he does need to consistently pick the right times and the right matchups to exploit.

Run the ball (a little) more.

Obviously, the Patriots shouldn’t be calling for any quarterback runs of Jones outside of the occasional QB sneak with a yard to gain. Running the football isn’t his strong suit, and he clearly doesn’t like to do it.

But his reluctance to do so has left yards on the field for the Patriots of late.

When teams like the Dolphins send heavy pressure against Jones, they’re doing so with the expectation that the rookie quarterback will stand in the pocket almost every time and take a shot to get the ball out of his hands if needed. What’s more: On the few times Jones does break away from a collapsed pocket, they count on Jones looking to throw the ball and sag defenders into the secondary to prevent that.

Both of those strategies beg for Jones to take the five or six yards of green grass ahead of him and keep the ball moving.

Though Jones is being pursued as he breaks the pocket on his play against Miami, he stands a much better chance of picking up a first down if he tucks and runs than attempting a high-difficulty throw to Nelson Agholor that his arm doesn’t have the strength for.

The basic premise behind Jones’s play is good: Keep your eyes down the field and look to throw even when you escape the pocket and don’t subject yourself to unnecessary hits. But that doesn’t mean he should never run at all, especially when defenses are disrespecting Jones’s ability and willingness to do it while selling out to sack him.

There are times when passing up a possible first down with his legs is worth it, such as on his 35-yard completion to Henry against the Dolphins as he rolled to his left. But if opponents are going give Jones and the Patriots’ offense free yards, the rookie needs to oblige them from time to time. 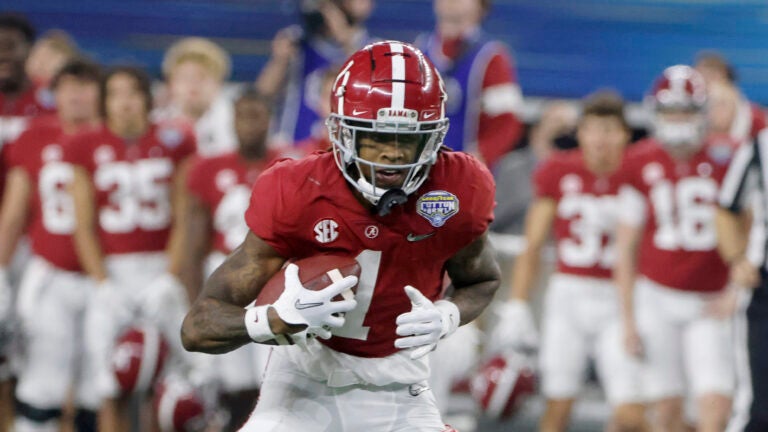