With Chris Sale pitching just 2 2/3 innings in Game 1 of the ALCS, the Red Sox relied heavily on their bullpen in Friday’s 5-4 loss to the Astros.

The Red Sox’ ace got tabbed to start Game 1 after arguably having two of the worst starts of his career, including his Game 2 performance in the ALDS where he allowed five runs in just one inning.

The first two innings of Friday’s game showed some signs that Sale’s slump would continue. He walked Astros leadoff hitter Jose Altuve to start the game and allowed a single to Alex Bregman two hitters later. A wild pitch moved both of them into scoring position, which helped score Altuve on a sacrifice fly later in the inning.

After getting out of the first inning allowing just one run, Sale dug himself into deep trouble in the second. He got the first Astros hitter out but gave up back-to-back singles to Yuri Gurriel and Chas McCormick before hitting Martin Maldonado.

But Sale was able to turn it around. With Altuve up again, he got the Astros’ star to whiff on three pitches, putting him away with his signature slider. Michael Brantley lined out to end the inning off Sale’s slider that was down and away.

Getting out of the jam helped Sale feel better about his performance on Friday coming off of two of his worst outings with the Red Sox.

“I think that everything as a whole clicked a little better tonight. My command was spotty at times but when I really needed I could bear down and kind of grab what I’ve been looking for.”

Red Sox manager Alex Cora shared he was “close” to taking Sale out of the game at that point. However, he liked the matchups Sale was about to face and he was proven right, saying “he found another gear.”

Sale came back out for the third, retiring Bregman but gave up back-to-back singles again. He did strike out Kyle Tucker for the second out of the inning, though Cora ended Sale’s day there. Sale gave up one run on five hits, one walk, and two strikeouts.

Cora knows that everyone wants to see Sale last longer in his starts, but he liked what he saw on Friday compared to his preview two starts.

“He wants more. He wants to go deeper into the game,” Sale said. “But where we were bullpen-wise and the matchups that we had, we felt that was the right time to take him out. But I do believe he threw the ball a lot better. He’ll be ready for his next one. This guy, we count on him. And I think he made good strides today.”

Sale also admitted that he’d like to stay in the game longer. The Red Sox did hold a 3-1 lead when he left the game though, and he wants to put his team in a position to win.

“At the end of the day, you’re just looking for close games at this stage of the game,” Sale said. “In the postseason, any time you can keep it close and do your job — I heard Dugie (Alex Verdugo) say the other day ‘AC (Alex Cora) is playing chess,’ so, I’m just a piece of his chess game. Whatever he needs me to do, that’s what I’m there for.”

Sale’s early exit meant that the Red Sox’ bullpen had a long night ahead of them. The bullpen held steady in their first 2 1/3 innings, keeping the game at 3-1. But in the sixth, Tanner Houck gave up a game-tying two-run homer to Altuve. Houck’s slider hung over the heart of the strike zone, and the righty pulled it deep to left to tie the game.

Hansel Robles came in for the seventh. He looked in command, getting Bregman and Alvarez out to start the inning. After throwing four straight high-speed fastballs, Robles threw a high changeup to Correa, who hit out to left field to give Houston a 4-3 lead.

The Astros added another run in the eighth when Hirozaku Sawamura loaded up the bases and Altuve knocked a runner in on a sacrifice fly. Despite the bullpen’s miscues, Cora was pleased with the unit’s performance, saying “I think overall, we did an outstanding job.”

“That’s the nature of the game, right? They got some big outs,” Cora said. “I don’t want to say we only made two mistakes because we probably got away with some pitches over the heart of the plate, but they took advantage of two mistakes. Altuve on the slider and [Correa] on the changeup. We’ll keep doing what we do. We were in the game all the way until the end. We feel good about what we did today offensively. So, we just got to build up and keep going and be ready for tomorrow.”

Boston ended up using seven relievers over 5 1/3 innings on Friday. Looking ahead, Sale offered to pitch out of the bullpen if need be and he feels a bit more confident about his changeup, which he threw just four times on Friday.

While it’s highly unlikely Sale will come out of the bullpen in Saturday’s Game 2, the Red Sox are starting someone who they have full confidence in: Nate Eovaldi.

“I don’t think there’s another guy on the planet I’d rather be pitching tomorrow than Nate,” Sale said. “You look at what he’s done this year, you look at his postseason resume — it stacks up with anybody, honestly. I don’t care where we’re at, who we’re facing, what the lead is, what the deficit is. It doesn’t matter. We’ve got the right guy on the mound tomorrow. That’s all we can say.” 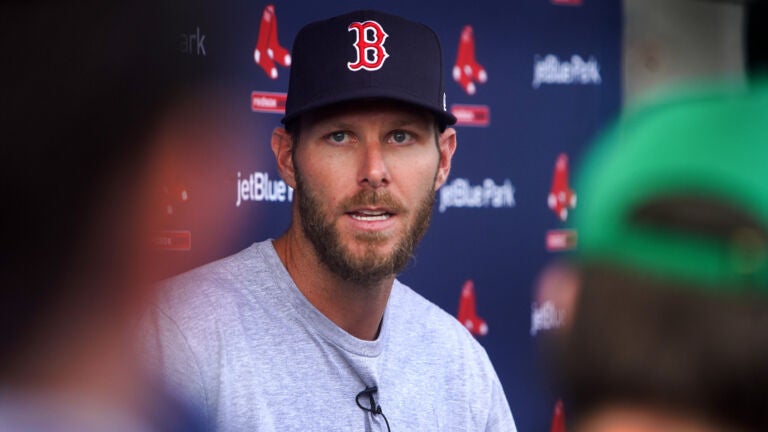 Chris Sale 'liked what he saw' after recent bullpen session