Isaiah Roby and Ty Jerome each finished with 15 points for the Thunder, who won their first game since March 31 against Toronto.

Oklahoma City committed 27 turnovers but went 13 of 30 from 3-point range to beat back a furious late charge by Boston.

Jaylen Brown had 39 points for the Celtics, who have lost four out of five as they fight to maintain their position in the tight Eastern Conference playoff race.

The Celtics made the Thunder work in the closing minutes.

Oklahoma City had its 11-point lead erased in the third quarter before taking a 106-95 edge on a layup by Bazley with 2:25 left in the game.

It was 110-100 before the Celtics reeled off seven straight points. Boston applied pressure, but Bazley got in the lane for a dunk.

Boston cut it to 112-109 on a pair of free throws by Pritchard with 30.8 seconds remaining. The Celtics then fouled Theo Maledon, who hit two free throws.

Brown was fouled on a layup attempt and hit both of his ensuing free throws. Oklahoma City then beat Boston’s full-court press and Isaiah Roy dunked to close it out.

Coach Brad Stevens said he’s hopeful both Tatum and Williams will be able to return Wednesday when Boston hosts Charlotte. Walker will miss that game and maybe more — yet another hiccup for a team Stevens said has little room for error with 10 games left in the regular season.

Celtics: Shot 39% (19 of 49) in the first half. … Fournier started 0 for 3 before he connected on a jumper in the second quarter. It was his first field goal in three games since returning from the league’s health and safety protocols list last week. Before that, he had missed 13 straight field-goal attempts.

The Celtics observed a pregame moment of silence for Boston native and former University of Kentucky basketball player Terrence Clarke.

Clarke died in a car crash in Los Angeles last week, a month after declaring for the NBA draft.

Several Celtics, including Brown and Tatum, were mentors to Clarke and he was their guest at multiple games last season. 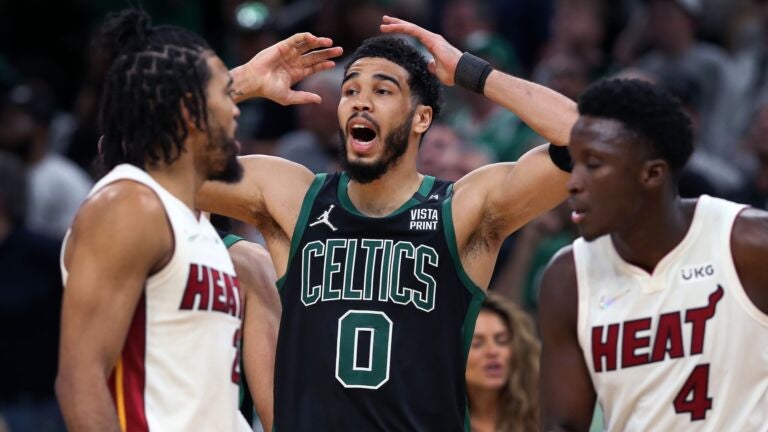