As the NBA regular season winds down, and the Celtics continue to sputter to the finish line, it appears more and more likely they’ll be destined for the play-in tournament.

Much like the First Four in March Madness, the NBA play-in tournament is designed to provide compelling matchups featuring teams that weren’t quite good enough to make the initial field but weren’t quite bad enough to be out of the playoffs entirely. As UCLA showed this NCAA Tournament, when it went from the First Four to the Final Four, a deep run isn’t out of the question. Of course this is the NBA, and it’s often more difficult for lower-seeded teams to make some noise.

Participating in the play-in tournament would be far from an ideal scenario for the Celtics, especially because a win would likely result in a matchup with the Philadelphia 76ers, Milwaukee Bucks, or Brooklyn Nets in the first round.

The Celtics are currently 35-32, as of Saturday, and sit in seventh place in the Eastern Conference – one full game behind the sixth-place Miami Heat. They finish the regular season with two pivotal matchups with the Heat and games against the Cleveland Cavaliers, Minnesota Timberwolves, and New York Knicks before finding out their fate.

If they beat the Heat twice, they’re suddenly looking at the six-seed, and potentially even the five or four if they keep winning. If they lose twice, they’re almost certainly guaranteed to end up in the play-in, which will take place from May 18-21.

If the Celtics finish in seventh and win, nothing changes. If they end the regular season in seventh and lose twice, they’re done. Losing their opening play-in game, winning the next, and facing the 76ers might actually be the best outcome at that point, but of course it won’t affect the way they approach the situation.

The second half of the regular season will be followed by the 2021 NBA Play-In Tournament, May 18-21!

Teams with the 7th-highest through the 10th-highest winning percentages in each conference will qualify to determine the 7th & 8th seeds.

It’s the second year of the play-in tournament and the first in this format. Last year, in the bubble in Orlando, the Portland Trailblazers beat the Memphis Grizzlies to officially become the 8-seed in the Western Conference, and the NBA decided to take it one step further in 2021 with a four-team tournament in both the East and West.

“Whoever came up with that s*** needs to be fired,” James told reporters.

“I think that there are some good things about the play-in tournament,” Ainge said on 98.5 The Sports Hub’s “Toucher & Rich.” “I prefer the older way, but this is just what we are dealt with and we have to make the most of it.”

The NBA playoffs will begin May 22 after the play-in tournament concludes. 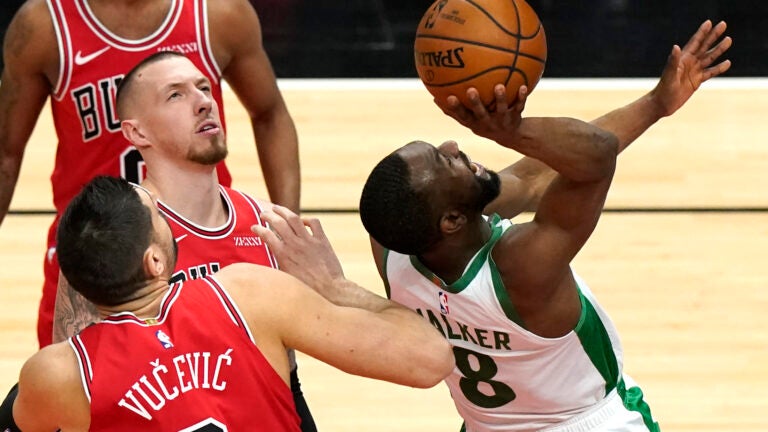 3 takeaways as Bulls pull away from Celtics, who drop costly loss in standings