No matter how long the NBA continues the play-in tournament beyond this season, it will never get as fortunate with a matchup as it did with Warriors-Lakers (or Stephen Curry–LeBron James) this season.

But that matchup — won by the Lakers, 103-100, in a lived-up-to-its-billing-and-then-some showdown on ESPN Wednesday night — almost guarantees that the league and its broadcast partners will keep the play-in games around, in the hope that at least some compelling matchups come around every few years.

The Lakers-Warriors matchup was a thriller on the court but a rout in the ratings for ESPN. The telecast averaged 5.62 million viewers, the largest audience for an NBA game on the network since the 2019 Finals, per Nielsen Media Research. Viewership peaked in the wee hours of the morning, drawing an average of 6.15 million viewers from 12:30-1 a.m. on the East Coast.

The game was the most-watched program on television in all key demographics Wednesday night. The only NBA game this season that drew a larger television audience was the Christmas Day matchup between the Mavericks and Lakers, which was simulcast on ESPN and ABC.

The Celtics’ play-in victory over the Wizards Tuesday night on TNT was also a success, though not near the magnitude of Warriors-Lakers. That game averaged 2.5 million viewers, making it the most-watched NBA game on the network since opening night. It was also a big draw in the Boston market, earning a 5.3 rating.

Grizzlies-Spurs, the opening act for Warriors-Lakers on ESPN, averaged 2.29 million viewers, making it the third-most-watched game on ESPN this season. The Pacers’ rout of the Hornets Tuesday on TNT averaged 1.4 million viewers with an early 6:30 p.m. start leading into Celtics-Wizards.

The least suspenseful matchup turned out to be the Wizards’ blowout of the Pacers Thursday night to earn the eighth seed in the Eastern Conference.

Ratings data wasn’t yet available at this writing, but the game’s lack of suspense was the subject of a bit of hilarious banter between Kenny Smith and Charles Barkley immediately afterward on “Inside The NBA.”

Barkley, being Barkley, groused that the league is “trying to kill” them with mostly uncompetitive play-ins.

Smith defended the concept, citing how exciting the Warriors-Lakers game was.

That left Barkley incredulous: “We didn’t have that game, fool!”

There won’t be many other games like that, with high-profile teams with the highest-profile stars playing for a chance to just make the playoffs. But it was a big enough deal — and the secondary games were a big enough success — that the play-in tournament must be considered a bona fide hit, one that should have many seasons to come.

ESPN announced plans this past week for a six-part documentary series on Derek Jeter. Titled “The Captain,’’ it will air on yet-to-be-disclosed dates, most likely in advance of his induction in the Baseball Hall of Fame in July. So count on it running about as long and fawning over Jeter as much as a Red Sox-Yankees broadcast on Fox, circa 1999.

It will be interesting to discover if this is … well, interesting. Jeter lived a vivid personal life during his 20 seasons with the Yankees, yet he managed to keep most of the details private and out of the tabloids. In that environment, where gossip is currency, it’s as remarkable and improbable an achievement as winning five Gold Gloves despite having defensive range only slightly greater than that of Babe Ruth’s monument.

ESPN, in what is certain to be a fruitless quest to match the buzz of “The Last Dance,’’ director Jason Hehir’s engrossing eight-part series on Michael Jordan and the dynasty-era Chicago Bulls, is touting the Jeter series as a candid and broad look at his impact.

“The documentary series will use Jeter’s journey as a vessel to tell a larger cultural story that explores race, family, community, rivalries, and more,’’ said ESPN in a press release announcing the series. “The heartbeat of the project is candid access to the man who helped restore shine to a team, a city, and a culture.”

Eh, I’ll believe it’s not a fancy hagiography if it delves into why he wouldn’t move off shortstop when the Yankees acquired Alex Rodriguez before the 2004 season. Breath: Not being held.

Even I recognize it’s probably too much to ask for at least one of the six parts to be dedicated to Jeter captaining the Yankees team that finally lost to the Red Sox.

Not on top of his game

Marv Albert might be the greatest NBA play-by-play voice of all time, and he deserves all of the plaudits as he heads into retirement. He’s most associated with the Knicks, but I’ll always think of him foremost as the lead national voice for NBC during the Bulls dynasty. But it was impossible not to wonder during the TNT’s Celtics-Wizards broadcast whether he’d stuck around a little too long. Albert identified Celtics rookie Aaron Nesmith (No. 26) as Marcus Smart (No. 36) four times during the game. He also mixed up Nesmith and Romeo Langford, who look nothing alike. Analyst Grant Hill was too polite to correct him, but he did jump in once to identify Nesmith after a block before Albert could mention a name … Speaking of the Alberts, Marv’s son Kenny Albert has done his usual steady work behind the mic during the Bruins-Capitals series on NBC. But I can’t be the only one going through serious Doc Emrick withdrawal this postseason, the first since his retirement … Given how this baseball season is going, maybe Jordan’s should give away free furniture if the Sox don’t throw a no-hitter this season. 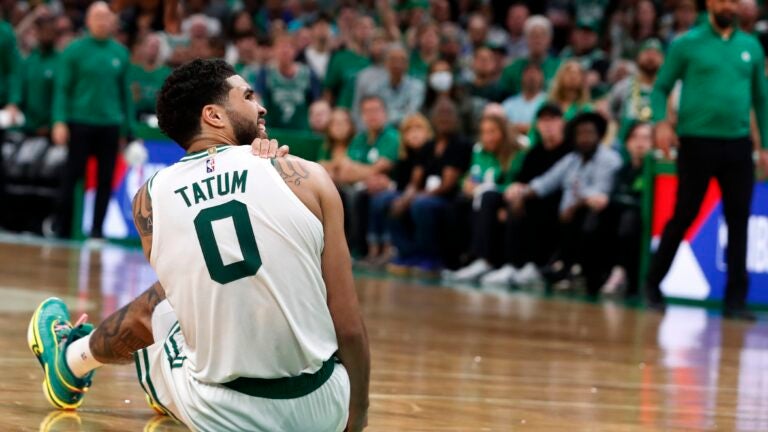