Gronk is very productive when lining up as wide receiver: “This is a trend that will likely continue. The Pats have gone with an empty backfield quite often, and none of their first three opponents had anything resembling an answer to New England’s spread formations.’’ (MassLive.com)

Bruins center Ryan Spooner focused on ‘small things that can make a big difference’: “And with a chance to start the season on the Bruins’ third line, Spooner knows he has to spend time on the parts of his game that need to be stronger, including faceoffs, defensive play, and moving without the puck.’’ (The Boston Globe)

David Lee is providing veteran leadership at ‘spirited,’ ‘intense’ practices: “I try to lead by example,’’ Lee said. “I think I set a pretty good example with how hard I work. I know that when I was a young guy, I never responded that well to the veterans that wanted to give a 20-minute speech every day. So while I’ll pull guys aside if I see something I can help them with, I’m going to be a guy that’s instead going to try to lead by doing the right things and taking care of business on the floor. If your veterans do that then the young guys will follow.’’ (CSNNE.com)

Jonathan Papelbon might be an expensive headache, but one worth the risk for Boston Red Sox “If you consider the Red Sox are due to pay a 41-year-old Koji Uehara $9 million next season to be their closer only one removed from him missing most of the year with an injured wrist, doesn’t it make sense to consider Papelbon instead?’’ (Boston.com)

Rozier to fans: ‘Hopefully, you all will cheer us on to another championship this year’:

Old Boston Garden closed 20 years ago, but mystery of the monkey lives on:“While the old Garden is now a parking lot, one strange, related story has never been neatly paved and sealed: the legend of the Boston Garden monkey.’’ (Boston.com)

Why sending Hanley Ramirez home was positive for Sox: “There is absolutely no big deal about Hanley Ramirez not being around the Red Sox. Nothing. He’s back in Fort Lauderdale, Fla., attending to his right shoulder strain with his personal trainer. Terrific. Everyone should be happy.’’ (The Boston Globe)

Don Orsillo, Padres announcement reportedly coming this week: “According to multiple sources, the San Diego Padres will announce the hiring of Don Orsillo either Wednesday or Thursday.’’ (WEEI.com)

Photo finish: Where the Patriots called home before Gillette 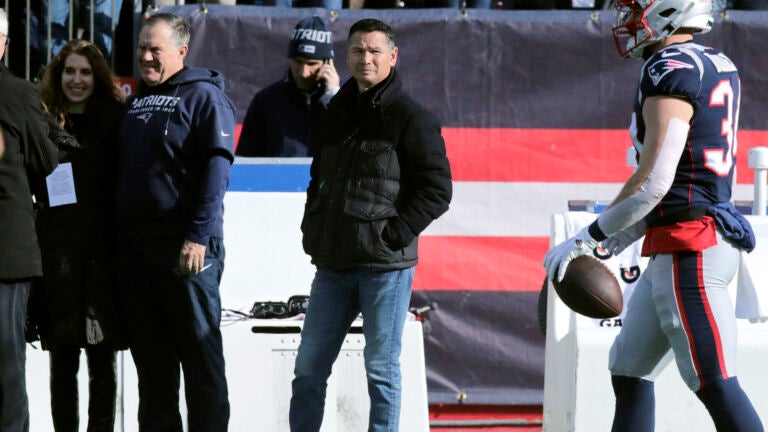