The New England Patriots doled out a record amount of free-agent money last week as the franchise attempts to bounce back this season from its first sub-.500 finish in 20 years. Pro Football Focus has even ranked the Patriots the most improved team in the NFL as of this point in the offseason.

NFL.com draft analyst Lance Zierlein suggests New England could add their quarterback of the future to the mix when the 2021 NFL Draft rolls around next month.

“Bill Belichick knows he needs a quarterback of the future, and Jones may fit the profile of what he’s looking for in an accurate, heady signal-caller,” Zierlein writes in his mock, which accounts for each team’s additions and subtractions in free agency.

Zierlein joins a growing chorus of NFL experts saying the Patriots’ blistering free agency, which includes the signings of tight ends Hunter Henry and Jonnu Smith as well as deep-threat receiver Nelson Agholor, could set New England up well to draft a signal-caller to take over for Newton when his contract is up after this season.

Jones, in particular, has frequently been linked to the Patriots by experts who see his skill set as comparable to former Patriots quarterback Tom Brady. However, other experts, including ESPN’s Mel Kiper, have recently projected Jones and the other four top quarterbacks could all be gone within the first 10 picks of the draft.

While Zierlein has Jones falling to No. 15 and New England standing pat to take him, it’s notable that the draft expert predicts another top quarterback could also slip in the draft: Ohio State’s Justin Fields, who goes to the Denver Broncos ninth overall in this mock.

Fellow NFL.com expert Bucky Brooks suggested this weekend the Patriots are “really high” on Fields but likely would “have to [trade up] quite a ways” to draft the Buckeyes’ quarterback, whom many consider a top-three prospect at the position.

In Zierlein’s scenario, the Atlanta Falcons, who just restructured longtime quarterback Matt Ryan’s contract, trade down in the draft, allowing the Carolina Panthers to take fast-rising North Dakota State quarterback Trey Lance fourth overall, and then pass on both Fields and Lance when their turn comes up with the No. 8 pick.

A prospect like Fields sliding all the way to No. 9 overall could prompt the Patriots to move up for him if they wanted. But if not, Zierlein suggests there’s a chance now to grab a new franchise quarterback in Jones without having to make a trade. 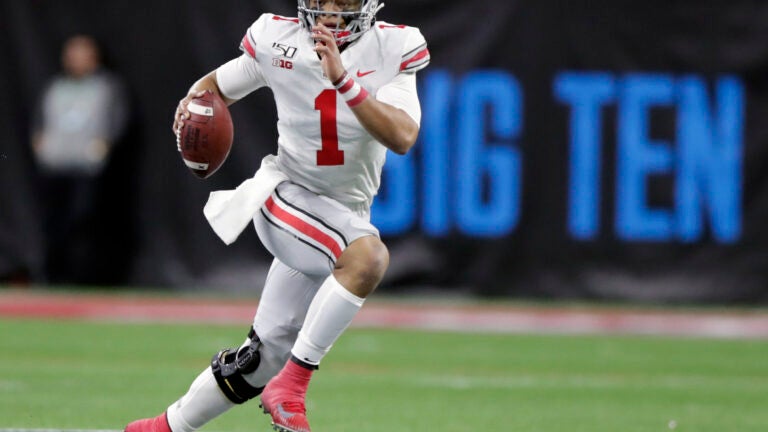