NIAGARA FALLS, Ontario — The resurrection of Chris “Knuckles’’ Nilan began several years ago on the fringe of Boston. After 30 surgeries from his 13-year career as an NHL enforcer, he was gobbling pain-killers as if they were M&M’s. When his supply ran out, he scored some heroin.

“I was in a hotel room by myself,’’ said Nilan. “I was sick, sick as a dog. I was shooting up and sitting on the toilet. I shot it and passed out on the toilet. I woke up and I saw the needle still in my arm and the blood. I’m like, ‘What the [expletive]?’ and I stood up right away.’’

But his legs were numb.

“I fell forward and hit my head on the wall and I knocked myself out,’’ he said. “I woke up and I said, ‘I’ve got to stop. I’ve got to get help.’ I was playing Russian roulette with five bullets in the chamber.’’

So he got down on his knees and prayed, as his mother taught him to growing up in West Roxbury.

“I don’t normally ask for help for myself,’’ said Nilan. “I pray for my kids, that God will watch over them and my parents, and my grandchildren.’’

There were two stints in rehab, set up by the NHL/NHLPA Substance Abuse & Behavioral Health Program. Nilan also went to see an addiction specialist in Hawaii recommended by his girlfriend, Jamie Holtz, executive assistant of the The Knuckles Group.

“I was embarrassed and ashamed to ask for help,’’ he said. “But I was killing myself.’’

Since then, Nilan has been battling to stay sober every day. He had 251 fights in his NHL career, but this is the longest and toughest fight of his life.

“Some fights never end. I am a drug addict and an alcoholic,’’ he said while sipping a cranberry juice and soda water before a recent speaking appearance. “My condition is in remission, 17 months. No booze, no pills, no nothing. Clean and sober.’’

His marriage of 25 years is over. He blames no one but himself. He said it was not fun and he didn’t do drugs to get high. He regrets hurting his family.

“I was sick,’’ he said. “When people get cancer, they get sympathy, but when people are alcoholics and drug addicts, it’s, ‘Oh, it’s self-induced. Just stop.’

“People don’t know that sometimes when you take a drink, the drink takes you. You don’t take the drug, the drug takes you.’’

But this is not a sad story. Chris Nilan is back.

Nilan, 54, recently spoke at six schools in Ontario in one week, part of his year-long “No More Bullies’’ Tour. He urges students to be defenders against bullying. Don’t be a jellyfish, he tells them. Have a backbone and confront the bully.

The gymnasium is packed with 800 students but it is quieter than an empty NHL arena.

“You know what happens when someone says something, in most cases? The bullying stops in five seconds,’’ he says. “Five seconds, which seems like a lifetime to the victim.’’

Afterward, a weeping girl thanks Nilan for his support.

“Knuckles’’ will never win a Nobel Prize, but his peacekeeping mission is well-received in Canada during Bullying Awareness Week.

“The fact that he was an NHL hockey player tweaked the students’ interest initially, but once they started to listen to his message, they were really taken in by what he had to say,’’ said Kristy Carbonara of the Success Program at Saint Michael High School.

“He was very personable, very human,’’ said Briana Domenegato, a student. “He just really related to us. It was very, very good.’’

Nilan’s life is on a roll now.

He is the star of “The Last Gladiators,’’ a poignant and powerful new documentary film by Academy Award-winning director Alex Gibney. He appears five times a week on English-speaking radio in Montreal, talking hockey. He has started his own “Knuckles’’ line of clothing and donates 50 percent of sales from “No More Bullies’’ T-shirts to the Kids Help Phone (knucklesnilan.com). He journeyed several times to Afghanistan to visit the troops. This month, he is growing a mustache he absolutely hates for a fund-raiser to promote colon cancer research. And he is touring schools, speaking out against bullying and drug and alcohol abuse.

Some people find it ironic that Nilan is tackling the issue of bullying, but not Knuckles.

“I wasn’t a bully,’’ said Nilan, flexing his arthritic fingers, one of which is missing a knuckle, and another that was nearly bitten off. “The fact of the matter is, I stuck up for my teammates. I wasn’t a bully, I was a defender. I defended my smaller teammates.’’

Lost after the games

While growing up in West Roxbury, Nilan wanted to be Bobby Orr. He played hockey at Northeastern University, and when a teammate got into a fight during an exhibition game against the Big Bad Bruins, Nilan took on Mike Milbury and Terry O’Reilly. Even his father, Henry Nilan, didn’t give him much of a chance to make the NHL. In “The Last Gladiator,’’ Henry jokes that the only way his son would be drafted was if there was another war.

In the mid ’80s, he scored 40 goals over the course of two seasons for Montreal. “Damn good for a fighter,’’ he said.

But his legacy is what he did with his fists. While with the Bruins in March 1991, he set the NHL record for most penalty minutes in a game, earning 10 penalties for a total of 42 minutes against the Hartford Whalers. But don’t call him a goon.

He became one of the most popular Canadiens and hoisted the Stanley Cup in 1986. But by 2009, he was being arrested for shoplifting at a Lord & Taylor’s in Braintree, a charge that was later dismissed in a Quincy court.

After he retired in 1992, he was lost. He spent three years in a community relations job with John Hancock and opened an insurance agency. He became an assistant coach with the New Jersey Devils in 1995-96. He was hired as head coach of the Chesapeake Icebreakers of the East Coast Hockey League and was named the league’s Coach of the Year in 1998.

But he started taking pain-killers after having major shoulder surgery the following year and eventually became addicted. As Nilan’s tolerance grew, Percocets became OxyContin, which briefly became heroin. He became a slave to the drugs and he was iced out of hockey.

While returning to Montreal in December 2008, he almost died in a car crash.

“I wasn’t high, but I was sick [from withdrawal],’’ said Nilan. “My bones felt like your joints are stuck in a vise.’’

At a lane change just across the Vermont border, he said, an 18-wheeler drifted over.

“The wind kind of blew the front end,’’ said Nilan. “I spun into the oncoming lane, flipped into a ditch, and got thrown out the back. I cut my head when I went through the back rear window. I was unconscious.’’

But he walked out of the hospital.

Nilan sees no correlation between his own experiences and the deaths in 2011 of former NHL tough guys Derek Boogaard (at age 28), Rick Rypien (at 27), and Wade Belak (at 35), all of whom battled addiction and/or depression.

“Those are life issues,’’ said Nilan. “Think about it: Everybody lives on the edge in sports. Am I predisposed to it? I hung around the street corners, drank beer, played hockey, it was part of the culture, right?’’

He decided to speak out against bullying when he heard about the 2010 suicide of Phoebe Prince, the South Hadley teen who hanged herself after months of being bullied. Five teenagers were prosecuted in the case but none served time.

“It incensed me,’’ Nilan tells the students. “Those five kids, they’ve got to live with that for the rest of their lives. They had a part in her death, I don’t care what anybody says.’’

He urges students not to be enablers or followers of the bully. Sooner or later, the bully will turn on you, he says.

His father, a Green Beret, gave his young son courage, telling him, “If there’s anyone smaller than you, I would expect you to stick up for them. Take up for the kids that were weaker.’’

In the NHL, Nilan often fought bigger opponents. He’d press his head into the guy’s chest during a brawl, making himself harder to hit. He’d let his opponent tire himself out, and then — boom — out go the lights.

Nilan says he never got a concussion fighting, and he regrets only one incident — a high stick to the mouth of Bruins star Rick Middleton.

Nilan is also responsible for the Bruins installing plexiglass to separate the Bruins bench from the runway to the locker room in the old Boston Garden. That sprang from an incident in which he went after the Bruins after being ejected and the fight spilled into the corridors. Mayor Ray Flynn wanted him prosecuted.

He found it hard to play in his hometown.

“I dealt with 16,000 people yelling, ‘Nilan sucks,’ with my mother and father and my family there,’’ he said, “but you see those people on the streets and they’re like, ‘Hey, how you doing?’

“Phonies — there’s nothing worse than a phony.’’

But Nilan was also given a standing ovation from Boston fans when he returned as a Bruin in 1990. In a controversial move, Milbury (then the Bruins coach) chose him for the 1991 NHL All-Star Game, but Nilan broke an ankle and didn’t play.

“What are you going to do?’’ he said with a shrug.

Nilan’s biggest regret now is not spending more time with his family. He is the grandfather of two boys but he sees them more on Skype than in person.

But he’s taking life a day at a time.

Before heading to his second speaking engagement of the day, he makes an impromptu visit to the Horseshoe Falls. The thundering waterfall invigorates him.

At Lakeshore Catholic High School in Port Colborne, a student asks Nilan if he had ever been bullied.

“I had a kid that picked on me,’’ he says. “I was a small kid in high school. One day he pushed me against the locker and wanted to fight me and I had to defend myself. And I did defend myself.’’

The bully, he says, walked away with a bloody nose.

The crowd erupts into applause.

Nilan shakes his head and gives the signal for them to stop.

“No, no, don’t get me wrong here,’’ he says. “I’m not condoning the violence. I’m not saying that’s the answer. The kid never bothered me again, and no one else did.’’

He leaves the students with his three-step plan:

“Say, ‘Stop, leave me alone,’ and walk away. Report it to anyone in a position of authority. And tell your parents. And it stops. 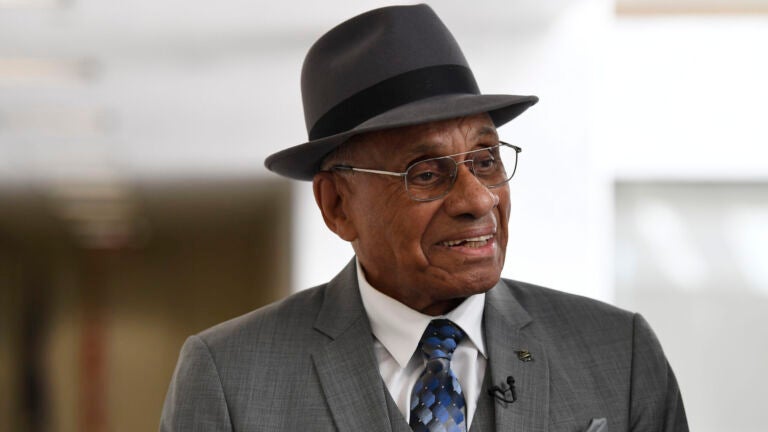