CHICAGO — Talk about poking the bear.

Jonathan Toews is a wonderful player, a do-it-all-well Selke winner, a Patrice Bergeron with more offensive flash. He’s just 25 and already established as the Blackhawks’ captain, a confirmation of the great regard in which he’s viewed by his peers.

In the handful of times times I’ve witnessed him interact with the media, Toews’s has been subtly funny, friendly, soft-spoken and says little to nothing that will steal a few headlines.

Which is why Toews’s candor was so jarring after the Blackhawks’ 6-5 overtime victory in Game 4 Wednesday in Boston.

Asked what the Blackhawks, coming off a 2-0 loss in Game 3 and struggling to play with their trademark speed, had done differently beyond reuniting him with Patrick Kane and Bryan Bickell on the top line, he said in so many words that rather than avoiding Chara, they attacked him.

“There’s certain ways you can expose him. The dump-ins that we made [in Game 4] were going to his side,” said Toews, who held his ground against Chara in front of the net on Brent Seabrook‘s winning goal.

“We made sure we were outnumbering him everywhere we went, taking away his stick first. We just try not to be intimidated by his size. We can outwork him, and we did that [in Game 4].”

In other words: We went at him. And the big fella couldn’t do anything about it.

He wasn’t the only emboldened Blackhawk after Game 5.

“Not a lot of guys attempt it, but to get a hit on him and to see him fall down, it’s rare,” said Bickell, who toppled Chara with a first-period check in Game 4 and has said the Bruins captain “doesn’t like getting hit.”

It’s foolish to suggest that the Blackhawks have suddenly solved Chara, who has used his enormous 6-foot-9-inch frame and crazy stick radius to torment offenses for 14 full NHL seasons.

“I mean, they’re allowed their comments,” said Bruins coach Claude Julien. “If they want to think that way, they’re entitled to it. I have no response to that except to know that my player is going to be good and ready, and they can try it again if that’s what they think.”

Chara was on the ice for five Chicago goals in Game 4, a remarkable number given that it often seems he isn’t on the ice for five goals in a month. But two came on 2-on-1s, and his overall performance was no more puzzling than that of defensive partner Dennis Seidenberg, who was nowhere to be found on a couple of productive Blackhawks rushes.

People talk about five goals against,” said Julien, “but were they all his fault? None of them were his fault, actually.”

It’s even more foolish to search for fault Chara’s physical game, to give him extra motivation. Bickell in particular might want to check the rear-view mirror early in Game 5.

Sure, Chara has had a few unusual hiccups this postseason — a turnover to the Rangers’ Derek Stepan behind the net that led to a bad goal in Game 4 of the Rangers series, essentially the entire first period of Game 2 of this series. And when he’s something less than flawless, sometimes you do wonder whether too much is being asked of him.

Chara is 36 years old now. He was drafted in 1996, 56th overall by Islanders, or 48 picks after the Bruins chose Johnathan Aitken. He’s shown no inclination to cut back on his mileage.

He’s averaged 29 minutes and 59 seconds of ice time during the Bruins’ 20 playoff games, which means he’s played 10 hours of hockey this postseason. He’s first in total ice time this postseason. The Blackhawks’ Duncan Keith is second — 48 minutes behind him.

We know that Chara is in extraordinary shape. If I have this right, his offseason regimen is power-lifting small-to-medium-sized mountains before sprint-biking to their peak. But these Blackhawks, particularly with Kane and Toews reunited, are extremely fast and skilled, and they are relentless.

Let Toews, Bickell and the Blackhawks revel in toppling him once. With the peak so close, it’s hard to believe Chara is about to fall again. 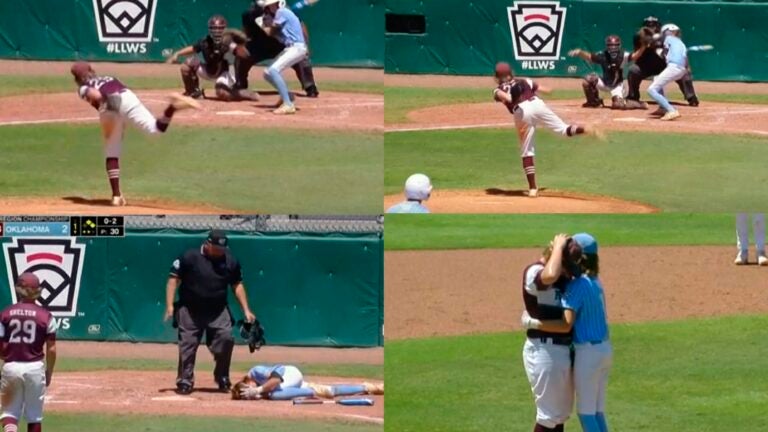