When Brent Burns packs his bags for road trips, the San Jose Sharks defenseman often leaves something behind: his cosmetic teeth.

Burns, a happy-go-lucky guy, said he is missing three of his real teeth and a fourth is ‘‘hanging on by a thread.’’ He is holding out hope it won’t join his other missing Chiclets.

‘‘I need that one for corn on the cob,’’ Burns said with a gap-filled smile.

Missing teeth have been associated with hard-nosed hockey — for better and for worse — for decades, becoming a stereotype of the game even with some players, like Burns, embracing it as a rite of passage or badge of honor. Gordie Howe, Bobby Clarke, Ken Daneyko, Stan Mikita, Bobby Hull — all have grins famous for what’s not there. Chicago’s Duncan Keith had seven teeth knocked out by a puck in the Western Conference final-clinching game in 2011 against San Jose and quipped afterward: ‘‘You’ve got leave it all on the ice.’’ 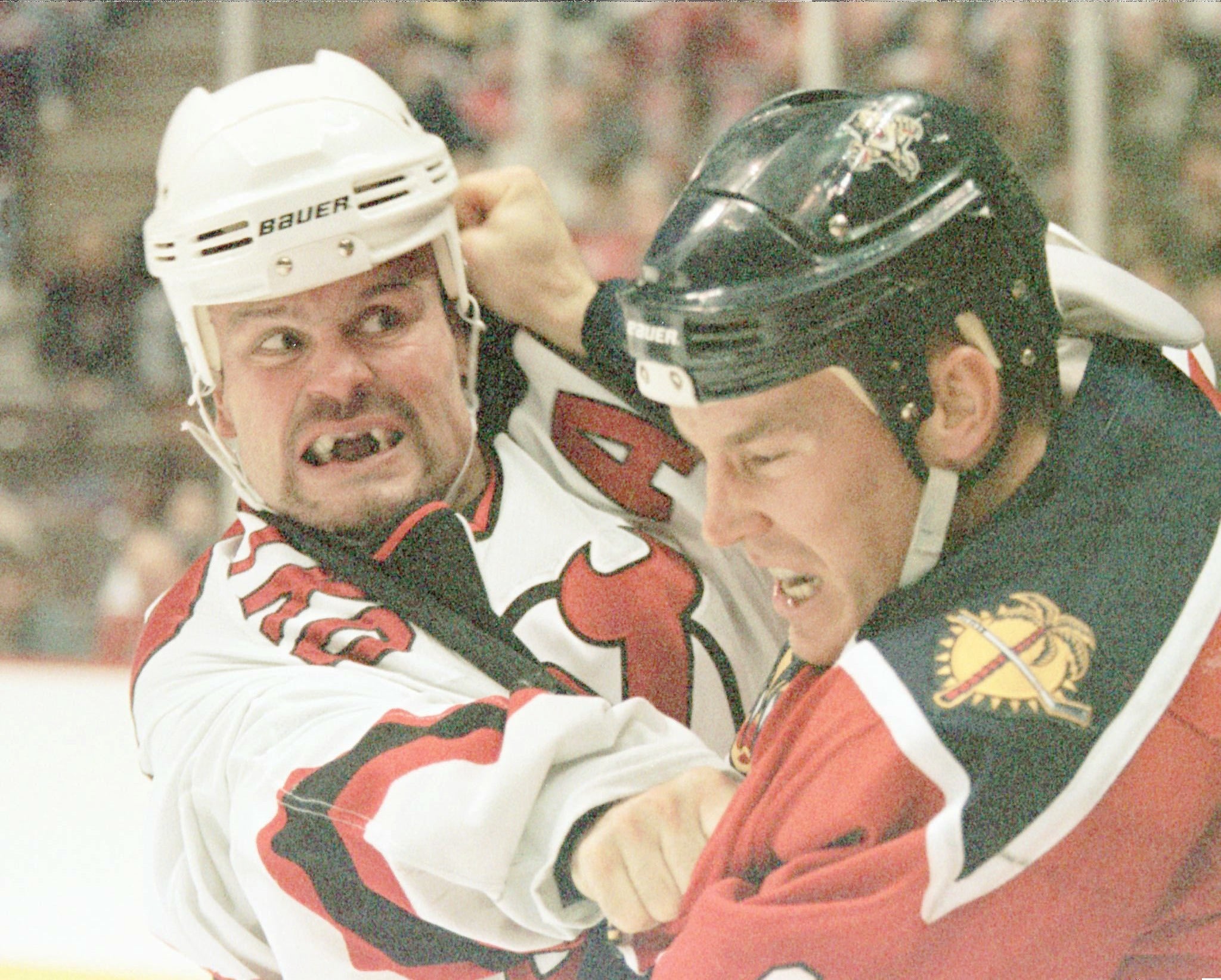 Many casual fans might assume all players are missing a few teeth — not true — but there is far more interest in keeping the originals than there was in the 1980s, a time Kings coach Darryl Sutter recalls seeing players writing their numbers on coffee cups, putting their teeth in the cups and setting them on a shelf before games.

‘‘The joke was switching teeth around,’’ Sutter said with a sly grin.

Hall of Famer Chris Pronger has great-looking choppers, though they’re not the ones he was born with, and Winnipeg Jets defenseman Dustin Byfuglien can pop a perfect-looking tooth in and out like he’s a magician. 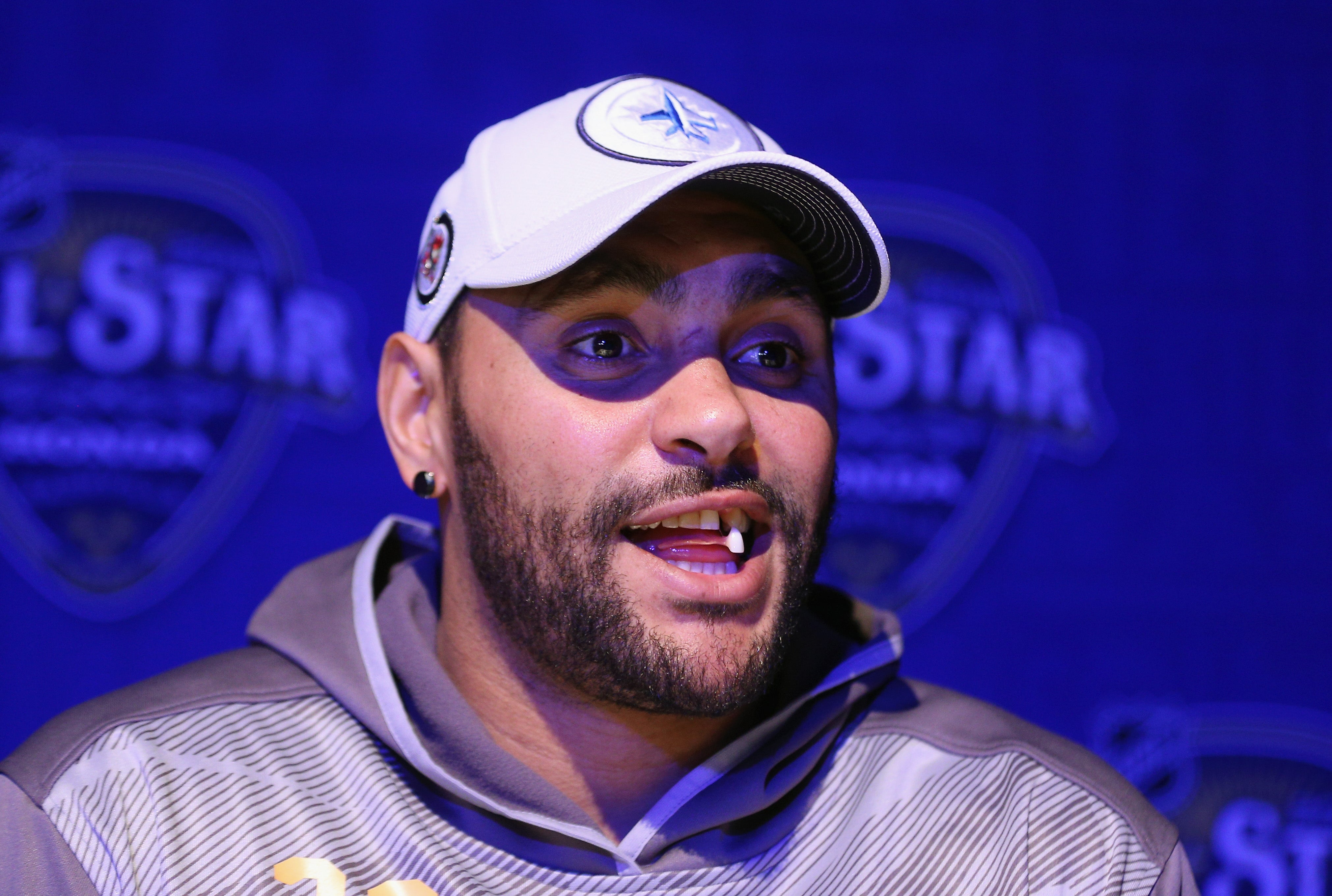 Dustin Byfuglien of the Jets speaks during Media Day at the 2016 NHL All-Star Game.

Despite player safety being scrutinized by the league more than ever and technological advances in equipment, hockey players are going to lose teeth. The only way to help players keep their teeth is to force them to attach full-cage masks to their helmets. And that, in the NHL at least, is not going to happen any time soon if ever.

If a player chooses to wear a mouth guard, he may help his chances of not having a concussion. His pearly whites, though, are still at risk from a puck, a stick, the ice or a check into the boards.

When players do get hit in the mouth with a stick or puck during a game, they are moments away from getting professional treatment from a team dentist and perhaps an oral surgeon. The Nashville Predators and Los Angeles Kings are among the teams with a dental chair in their arenas.

Dental care is one of the progressive moves made by the NHL, according to Predators general manager David Poile. When Poile was an administrative assistant for the Atlanta Flames in the early ‘70s, he said, he doesn’t recall the team even having a dentist.

‘‘An oral surgeon who can also do plastic surgery is ideal,’’ added Pronger. ‘‘I had a nice set of teeth. Now, I’ve got new ones. And, I broke my jaw and you probably can’t tell I had 50 stitches here and 27 there.’’

Unlike Byfuglien, Los Angeles Kings defenseman Drew Doughty doesn’t wear his cosmetic tooth, which he calls ‘‘a flipper’’ because he said it makes his lisp worse. Doughty had all of his teeth until losing one last year and another one early this season. One got knocked out by a puck and the other was jarred out of his mouth by a high stick. Doughty says the problems have contributed to his top lip drooping onto the left side of his bottom lip.

‘‘It’s kind of got a bunch of stuff built up in here so it’s always lazy,’’ he said. 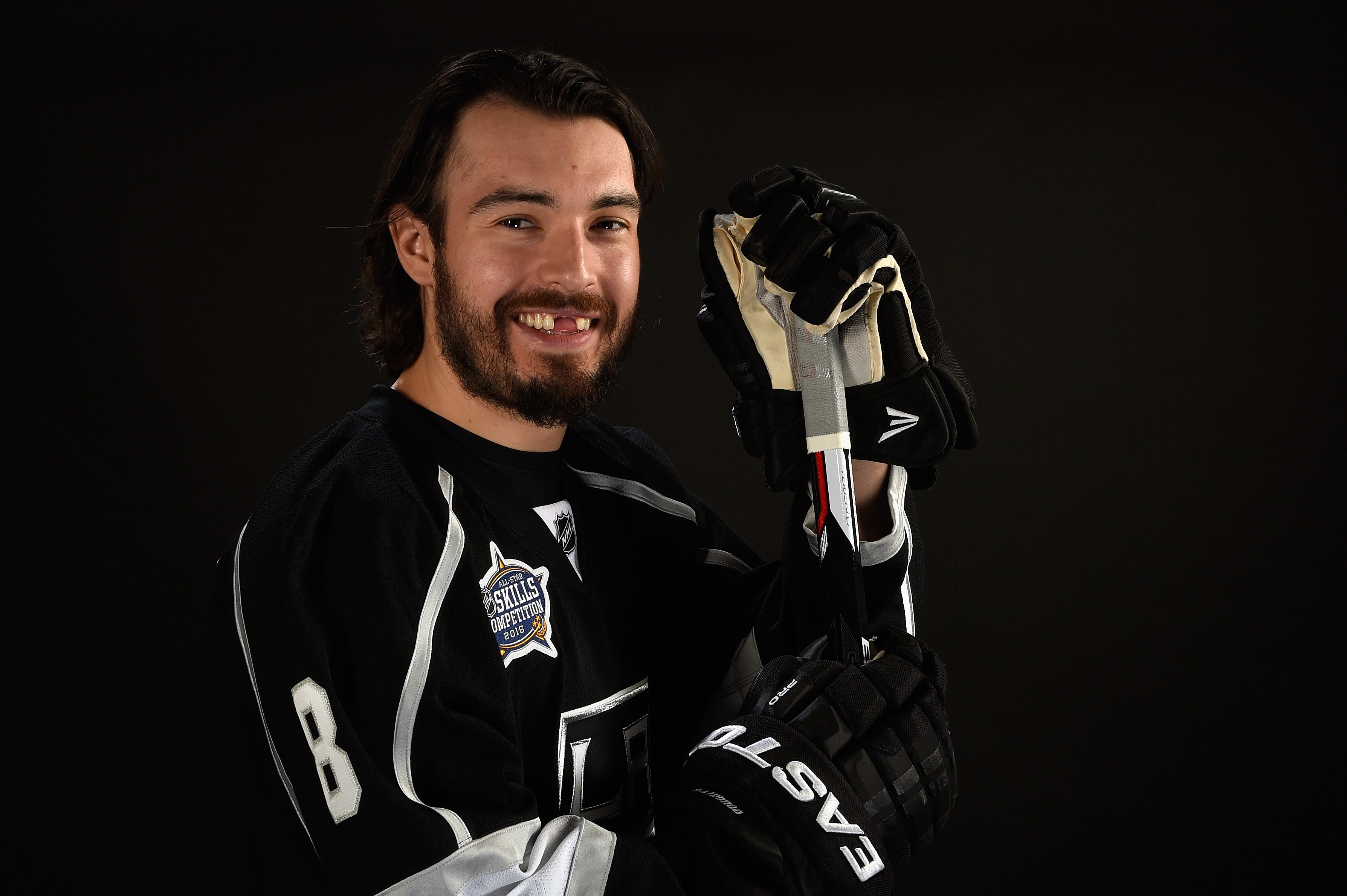 Drew Doughty of the Kings smiles for a 2016 NHL All-Star portrait.

Doughty also acknowledges he has been lax about protecting his teeth, and brain, to some extent by simply wearing a mouth guard.

‘‘I’ve been told I should many, many times,’’ he said. ‘‘My team doctors want me to wear one. With my teeth being knocked out — one with a puck in the face and one was a high stick — I don’t really think the mouth guard would help in those situations. But for concussions, I definitely think a mouth guard helps. I probably should be wearing one, but I never have my whole life so I’m not going to start now.’’