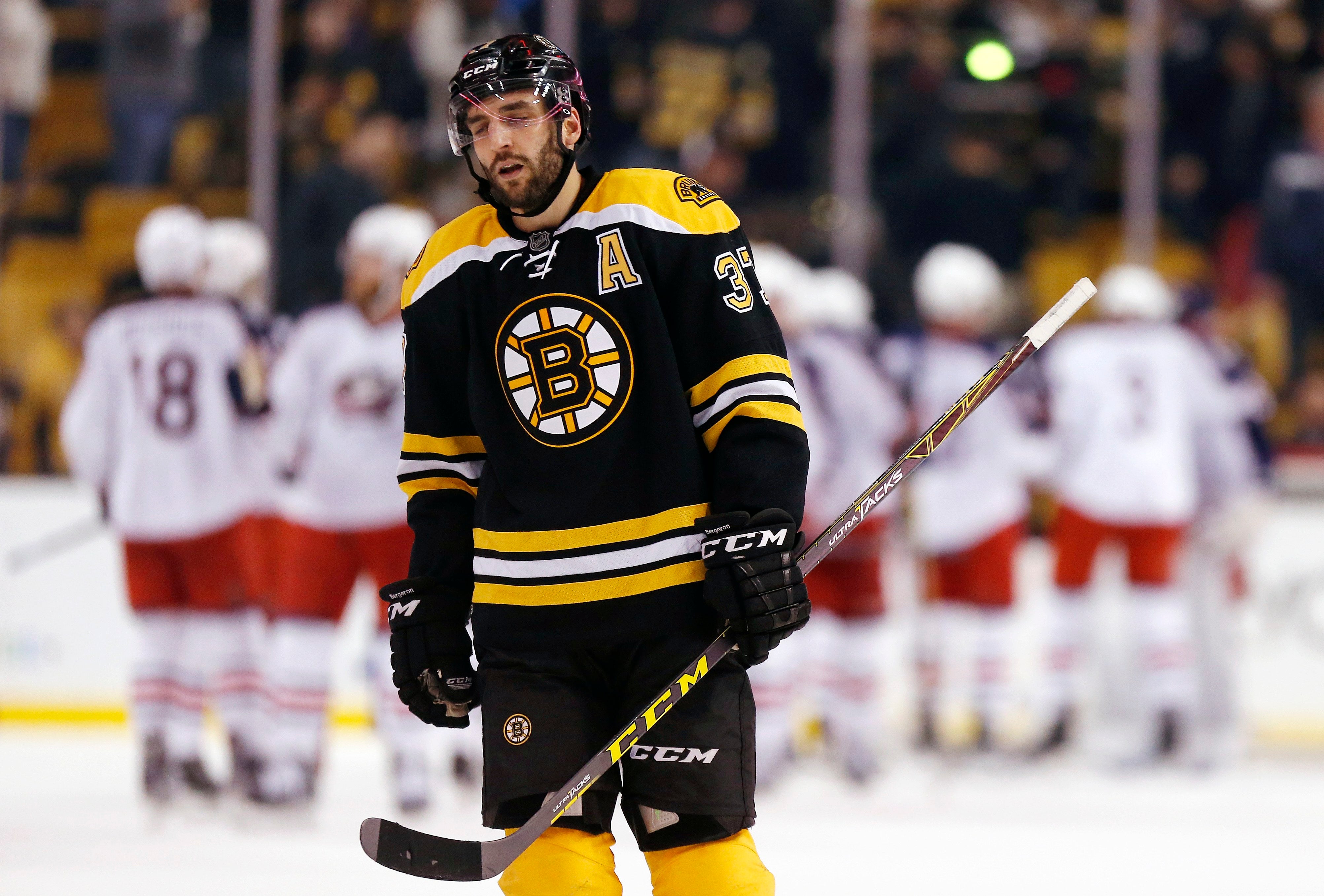 Patrice Bergeron skated off the ice as the Columbus Blue Jackets, behind, celebrated defeating the Bruins 6-4 . AP Photo

Oh, just when you thought that the Boston Bruins’ bandwagon might have welcomed a few more dubious followers in the wake of their recent 4-2 road trip and, especially, following Saturday night’s pulsating win over the Dallas Stars, the Bruins returned home to their familiar digs and proceeded to do what they’ve done most of the time they’ve played at the TD Garden this season.

Following Monday’s embarrassing 6-4 loss to the Columbus Blue Jackets, the second-worst team in the Eastern Conference, the Bruins are now a paltry 12-15-3 at home. Only the Buffalo Sabres, Blue Jackets, San Jose Sharks, Vancouver Canucks, and Toronto Maple Leafs have fewer wins in their own building.

Still, somehow, someway, both the Bruins and Sharks find themselves on the inside track for a playoff spot, each sitting in third place in their respective divisions. In the case of the Bruins, it’s games like Monday night that serve as prime examples why their fans are more privy to blow the whole thing up.

He’s right there. These guys are a trying experience.

Only the Stars and Washington Capitals, a pair of teams with valid Stanley Cup aspirations, have scored more goals than the 181 the Bruins have managed during the 2015-16 season, a pace that could take a hit depending what the team decides to do with free-agent-to-be Loui Eriksson by Monday’s trading deadline. Only six teams have allowed more than the 168 goals the Bruins have given up through 60 games. Among that half-dozen, only Patrick Roy’s Colorado Avalanche should really be considered in the playoff hunt.

The fact that goalie Tuukka Rask has been merely ordinary this season is a testament to his presence in net, particularly when he’s been fronted by a defensive corps both overmatched and undermanned. It’s a situation that general manager Don Sweeney and team president Cam Neely had to expect they were getting themselves into with last summer’s trade of Dougie Hamilton, leaving them approaching the NHL trading deadline looking for a cornerstone, young defenseman in the same mold as…well, Dougie Hamilton.

Age has caught up to Zdeno Chara and Dennis Seidenberg, Adam McQuaid just returned from an injured stint, and Kevan Miller has been a running punchline all season. Boston’s defense has been a cause for frustration all year long, and is ultimately the cracked foundation that is keeping the Bruins from making a serious run at what is, aside from Washington, a wide-open Eastern Conference.

Eriksson would figure to bring a first-round draft pick in return should the Bruins choose to deal the winger, who is second on the team in scoring with 58 points. But Sweeney and company have to also be cognizant of not becoming a team like the Edmonton Oilers, perpetually rebuilding in a never-ending cycle of mediocrity.

Eriksson isn’t likely to be back in Boston next year, not at the combination of dollars and years he’ll be able to get elsewhere on the open market come July. But while there’s reason to keep him around for a playoff run, packaging him along with one of their own first-round draft picks (Boston currently possesses their own and San Jose’s) could potentially widen what comes back on deadline day, a national holiday in Canada when desperation filters through every front office.

If someone out there in the mold of defensemen Jonas Brodin and Matt Dumba is dangled come Monday, it’s the deal Sweeney has been waiting for. But he might as well pack up shop and head to Loch Ness on a fact-finding expedition for the likelihood of another team surrendering young talent on defense for what would essentially be a rental. Oh, somebody will do something stupid on Monday, but it’s impossible to predict if it will ultimately be the Bruins on the receiving end of it.

Boston has three games remaining until the deadline, at home against the Pittsburgh Penguins Wednesday night, Friday in Carolina to take on the Hurricanes, and Sunday at home against the Tampa Bay Lightning. Eleven of the final 22 games are on the road, where the Bruins are 20-7-3 this season.

“We seem to play our system [on the road], really stick to the script,’’ said forward Brad Marchand, who served a costly, yet questionable, 10-minute misconduct against Columbus. “At home, we kind of deviate and that ends up costing us.’’

Deviate? It’s debatable who throws up on themselves more at North Station; the Bruins or the late-night, imbibing crowd flowing onto Causeway Street.

The Bruins are probably going to make the playoffs for the first time in two years and hardly anybody is happy about it.

As least the light load is saving the empty bandwagon fuel.