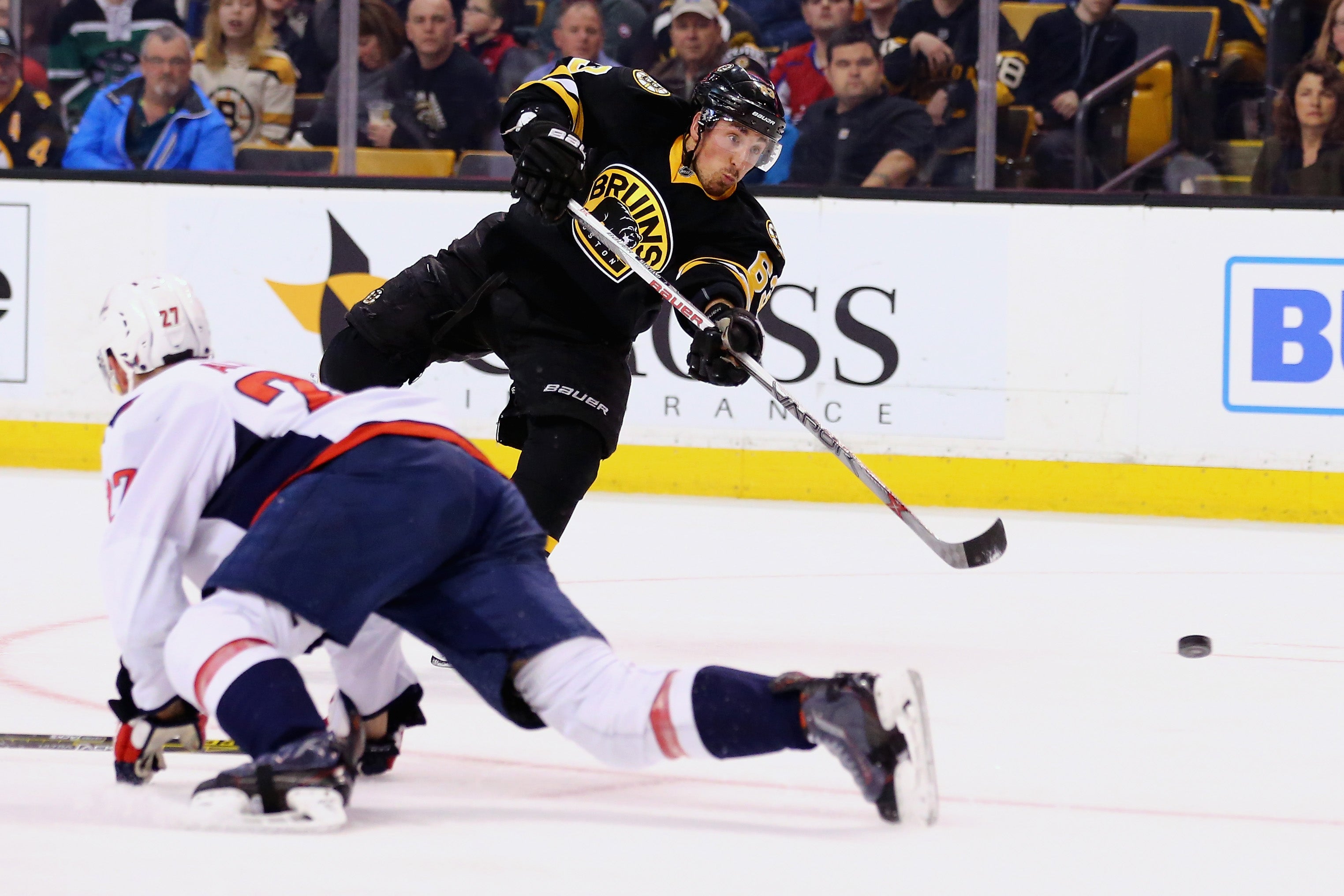 Brad Marchand of the Bruins takes a shot against the Capitals at TD Garden.

Three out of four possible points for the Boston Bruins against the two best teams in the NHL? Impressive enough.

That it happened to take place in Boston, where the Bruins had racked up only 31 points over the entirety of the 2015-16 season prior…maybe it’s something more.

Of course, Bruins fans have every right to argue that it should have been a clean sweep of the Chicago Blackhawks and Washington Capitals at TD Garden Thursday-Saturday. If not for the seemingly bogus offside call that rendered Bruins defenseman Torey Krug’s second period goal Saturday night a no-go, we could very well, perhaps, be talking about an impressive, two-game sweep of the Stanley Cup favorites by a team that has been searching desperately for an identity that somehow got lost in the street sweepers on Causeway Street.

But what Boston saw, for the first time in a long time, was encouraging.

The Bruins are 3-0 since the NHL trading deadline, and getting very close to .500 at home (15-16-4). Best of all, they displayed a sort of character and defining edge against the Capitals and Blackhawks that had only been present in quick whiffs at TD Garden this season.

“Well, I think the guys showed that they can obviously follow a game plan, and you have to have different game plans against different teams because of how they play,’’ Bruins head coach Claude Julien said after his team fell to the Capitals, 2-1, in overtime Saturday night. “But I think our guys showed the other night, tonight again, that we’re capable of playing our game, but also making some small adjustments to some of the things that they do. And Washington’s a team that doesn’t need a lot of chances, they’re just so good at burying them, and they showed that tonight.’’

It’s not like a 75 percent accrual of points across these two games should send the Bruins’ playoff hopes into a different stratosphere, but these results might serve as a beacon that Boston is in a better position than some of us might have thought as little as a week ago.

Coming off last Sunday’s loss to the Tampa Bay Lightning, and heading into trade deadline day, the Bruins managed to hang onto forward and free-agent-to-be Loui Eriksson, which seemed a foolhardy proposal in the days leading up to last Monday. General manager Don Sweeney spent draft picks on forward Lee Stempniak, and was ridiculed for his inability to sign the guy for nothing last fall. He dealt for Carolina defenseman John-Michael Liles, a 35-year-old seen as little more than an upgrade over beleaguered Kevan Miller (who left Saturday’s game with a possible shoulder injury after being boarded by Washington’s Alex Ovechkin).

The Bruins were more than likely going to be a playoff team either way, but one with a dilapidated defensive corps, dubious record against playoff-caliber teams, and the general sense that the franchise was simply treading water with no real long-term plan.

Two games won’t change all that.

“We’re confident in our group,’’ Bruins forward Brad Marchand said. “You know in this league anyone can win on any given night. Every team is so close and every team has good players. It’s just a matter of who’s willing to push a little extra to win the battles and compete a little harder each game and I think we have that kind of character in here.’’

OK, so the cynic will say that the Bruins got both the Blackhawks, whom they beat, 4-2, Thursday night, and the Capitals at most opportune moments. Chicago was coming off a Wednesday night win in Detroit, and sat starting goalie Corey Crawford in Boston. The Capitals were coming off a loss to the Rangers Friday night, and held Bruins-killing netminder Braden Holtby (9-2-0, 1.57 GAA in his career vs. Boston) on the bench.

But for a team that has one of the league’s most-daunting schedules remaining, it’s something, at the very least, to hold some sort of optimism. Boston plays at Florida Monday night, at Tampa Bay Tuesday, then home to host the Hurricanes and Islanders before heading out west. All of a sudden, they have an eight-point cushion between themselves and those still seeking postseason promise.

This two-game stretch may ultimately mean nothing depending how the Bruins play this week. But maybe, just maybe, something has finally clicked here.

“Well, we’re one shot away from beating the top two teams in the NHL,’’ Krug said, perhaps referencing his own goal that was negated after a questionable coach’s challenge. “We have other big tests coming up and every team brings something different to the table, and we’ll look forward to the next challenge.’’

According to defenseman Zdeno Chara, “I think we’re playing better, but, you know, at the same time there’s always room to improve.’’

That’s all anybody has been saying this season about the Boston Bruins.

These past two games shouldn’t change your mind about this team.

But they are a hint that maybe — just maybe — you might have to over the coming weeks.

4 crucial items for the Bruins' Don Sweeney this offseason