By the time you read this, Bruins head coach Claude Julien might share another status with Don Cherry, Dit Clapper, Bep Guidolin, and the 26 men who held the job before him.

By the time you read this, the winningest coach in franchise history will probably have joined them as a former Bruins coach.

This is as sad as it is inevitable. Julien ranks on the short list of the greatest coaches in Bruins history, with 393 regular-season wins – six more than Hall of Famer Art Ross  – and another 57 postseason wins, the most memorable of which came during the exhilarating Stanley Cup championship run in 2010-11.

The Bruins lost to the Ottawa Senators Saturday, 6-1, an embarrassing no-show in a crucial game, something that has become a habit in recent seasons. When the Flyers beat the Penguins later in the afternoon, the Bruins were eliminated from playoff contention for the second straight year. In both seasons, the Bruins played their worst when they needed to be at their best.

That’s not a trend that encourages job security. A coach often – and often justifiably – takes the fall for a singular collapse; Julien has overseen two in a row. Last year, it was general manager Peter Chiarelli who lost his job. Julien survived, but it’s hard to fathom he’ll survive another hideous ending. It’s a mild upset that Julien retained his job through Sunday.

Of course, Julien, ever so practical, understands this. He was not first-year general manager Don Sweeney’s choice for a coach, and his boss’s endorsements have been lukewarm at best. The owner can’t be thrilled, either. Jeremy Jacobs has to be infuriated that his precious pretzel-and-beer profits from the postseason will again amount to $0.

When the Bruins fire Julien, they will not have to look far for justifications. The collapses, plural, are a reason that will be easy to sell. They may cite the necessity going forward of developing younger players, the implication being that it is not Julien’s strong suit. They will thank him for his service and for his role in winning the franchise’s first Cup in 38 years – a drought that included 16 coaches who failed to end it.

Then they will go about finding a replacement who won’t be nearly as competent.

The Bruins will fire Julien, but they should not. This year’s team was severely flawed, certainly a lesser roster than they had a season ago, and yet Julien somehow coaxed 93 points out of a group that depended way too much on many aging veterans and uncertain youngsters. He is an asset, still, in an organization that should be hoarding as many as it can get.

By no means is all of this on him. He is a defensive-minded coach who wasn’t supplied with nearly enough quality defensemen. The roster has one superstar in Patrice Bergeron (he’ll be 31 in July, and don’t you hate seeing them waste these years of his career?), a shift’s worth of very good players (Brad Marchand, David Krejci, Tuukka Rask), and then a bunch of mismatched pieces at various stages of their careers.

That chatter about Julien struggling to nurture younger players? There’s some truth there, but it is exaggerated, in large part because of how he is perceived to have handled Tyler Seguin and Dougie Hamilton.

Seguin is a supreme talent who seemed determined to become a cautionary tale here. Apparently, he has matured enough in Dallas to maximize his immense ability. Remember, for whatever frustrations Julien had with him, it wasn’t the coach who made the puck-headed decision to trade him.

Hamilton is a promising if unrefined defenseman whose idea of how to do things reportedly clashed with what the organization demanded. He has talent; he compiled 43 points for the Flames this year. He was also minus-14. It remains to be seen how much of that promise will be fulfilled.

To suggest Julien is impatient with all younger players is to overlook, perhaps deliberately, some of the Bruins’ impressive player development successes on his watch.

Bergeron is such a responsible, dedicated, and talented player that he probably would have thrived under any coach – and did, for Mike Sullivan and then the hapless Dave Lewis, before Julien arrived in 2007-08. But Bergeron would be the first to tell you that Julien brought the best out of him. He’d say it a million times, if necessary. Endorsements don’t get much stronger than that.

Krejci and Milan Lucic developed playing for Julien. So did Rask, and Marchand, and David Pastrnak is on his way. It should not be held against Julien that he expects responsibility from his young players before he trusts them fully. It’s what a coach should do.

Letting Julien go reminds me of the Red Sox decision to dump Terry Francona, minus all of the salaciousness. He’s a coach/manager who has been around a long time and won a lot. Like Francona, he oversaw the end of a long championship drought. But deep into their tenures, a seismic collapse happened – in Julien’s case, it’s not just one – and that led to the clichéd suggestion that perhaps it’s time for a new voice.

Maybe a new voice, a new coach, would benefit some Bruins holdovers next year. But it’s hard to imagine the voice will be as respected, and the new coach almost certainly won’t achieve a fraction of what Julien has with the organization. I don’t know about you, but I still wish Francona was managing the Red Sox. We’ll feel the same about Julien, and sooner rather than later.

If – ugh, when, when, when – he is fired, believe this: time will quickly repair any perception that he overstayed his welcome here. When he comes back to the Garden next year, coaching a new team that is inevitably playing better on his watch than it did the year before, Julien will look a lot better to the frustrated fans than he does right now.

There’s still time to keep him. But you know they won’t. These days, the Bruins don’t know how to recognize a mistake before they’ve made it. 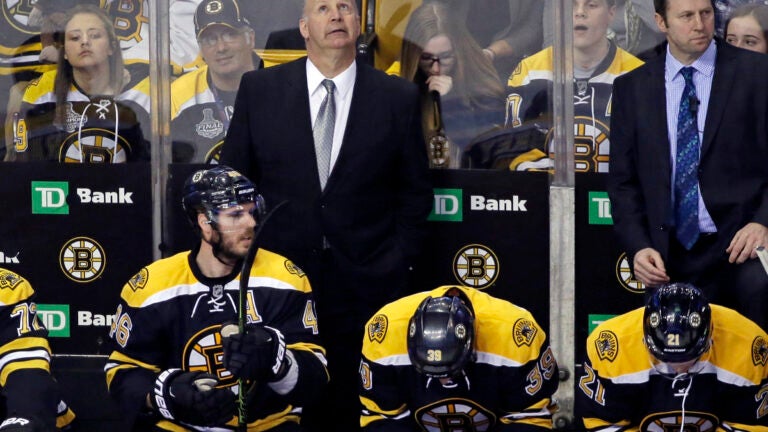