Another win in Boston certainly helped.

Semyon Varlamov stopped 29 shots, Nail Yakupov scored two goals and the Colorado Avalanche continued their recent success in Boston with a 4-0 win over the Bruins on Monday.

Sven Andrighetto and J.T. Compher scored first-period goals for the Avalanche, who improved to 11-0-0-1 in their past 12 games in Boston since the most recent loss on March 30, 1998.

‘‘I think we’re fortunate to be 2-1,’’ Avalanche coach Jared Bednar said. ‘‘Our best game of the road trip was certainly our third. To be 2-1 in a tough building here in Boston, against a good team to get a good solid win, this is a little bit of a sign of maturity.’’

Varlamov is also off to a good start after missing the final 40 games last season following hip surgery.

‘‘It gives you confidence and brings confidence to the team,’’ he said.

Tuukka Rask made 19 saves for the Bruins.

Boston coach Bruce Cassidy saw some mistakes from his young players that led to an early 2-0 hole, but he was most disappointed with the overall effort.

‘‘The core group that we rely on — it just wasn’t a good effort,’’ he said. ‘‘I put myself in that category.

‘‘We’re supposed to be ready to play at home, especially after having a couple of days off. That was the biggest disappointment to me. Things aren’t going to go your way some nights. To not have the energy to sustain it get yourself back in the game is disappointing.’’

The Avalanche grabbed a 1-0 lead when Andrighetto’s shot from the slot slipped into the net off Rask’s glove 4:41 into the opening period.

Compher completed a 2-on-1 break with former Bruin Carl Soderberg by firing a wrister over Rask’s left shoulder to make it 2-0 midway into the period with a short-handed goal.

Yakupov scored when Rask came out to chase a loose puck along the boards 6:07 into the third. And Yakupov added his second goal of the game with 44 seconds left in the third.

Cassidy even changed up the lines after the Bruins’ lackluster start.

‘‘I think it took us seven minutes to get our first shot on net,’’ Boston forward Ryan Spooner said. ‘‘I think he kind of thought the lines weren’t working so he just switched them up.’’

A ‘‘Let’s Go Red Sox!’’ chant broke out late in the game at TD Garden — a little before the Red Sox took the lead on Andrew Benintendi’s two-run homer in the fifth inning.

Public transportation heading into Boston was filled with fans wearing both Bruins and Red Sox jerseys with the two teams starting at nearly the same time. The Red Sox played Game 4 of the ALDS against Houston about 3 miles away at Fenway Park.

The Bruins’ best chance of the first two periods came when David Pastrnak came charging in along the left wing, cut in front and attempted to tuck the puck behind Varlamov, but he held his left pad along the ice next to the right post.

NOTES: Bruins D Torey Krug and C Austin Czarnik were both removed from injured reserved before the game and played. Boston’s forwards Noel Acciari (surgery left index finger) and David Backes (diverticulitis) were both placed on IR before the game. … It was the fourth time in eight seasons that Colorado played in Boston on Columbus Day. … Bruins C Patrice Bergeron played his 900th NHL game.

The teams face each other again in Colorado on Wednesday night. 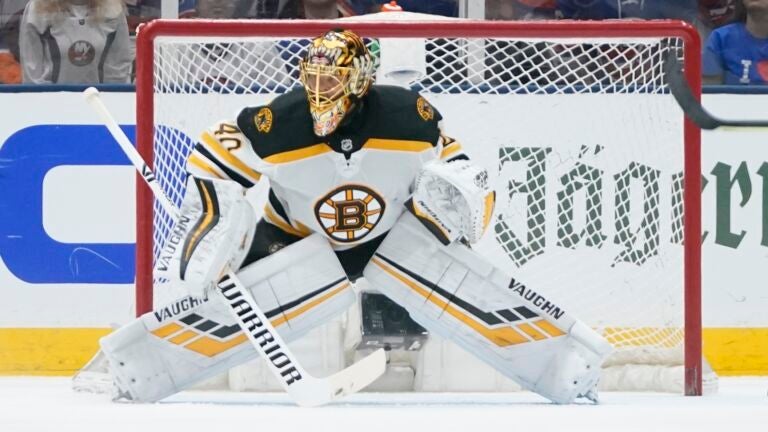