BOSTON (AP) — Call it a walk-off winner, a buzzer-beater, whatever you want. Tyler Toffoli simply had one of the most improbable game-winning goals.

Toffoli scored off a faceoff – his second goal of the game – just before time expired in overtime to give the Los Angeles Kings a 2-1 win over the Boston Bruins on Saturday night.

With 0.9 seconds left and the puck dropped for a faceoff, Anze Kopitar won the draw back to Toffoli, who unloaded a shot that beat Tuukka Rask to the far post from the top of the right circle, stunning the Bruins and the TD Garden Crowd that seemed ready for a shootout.

“It was right in my wheelhouse and I got all of it,” Toffoli said.

The clock had been reset by the referees from 0.4 to 0.9 before the faceoff after an icing by the Bruins. Los Angeles coach John Stevens called timeout and set up the play.

“We just took the timeout and Johnny said this is what we’re doing,” Toffoli said. “Kopi got it back clean and I got it off as fast as I could.”

The Kings’ celebration was delayed by a replay review, but they mobbed Toffoli after it counted.

Jonathan Quick made 29 saves for the Kings, who are off to their best start in franchise history at 9-1-1.

“You wonder how it could happen?” Bruins coach Bruce Cassidy said. “Boy, it would be tough to see if you could do it again if you tried it a hundred times.”

Brad Marchand scored for the Bruins and Rask, playing his first game after missing the previous three with a concussion sustained in practice, stopped 28 shots.

“It’s something that happens once in a blue moon,” Marchand said. “Tough way to lose.”

Kopitar knew it was a memorable goal and incredible execution of the play.

“I don’t think that’s going to happen anytime soon,” he said. “I’ve never seen it in my hockey career to work like that.”

In the closing minute of regulation, the Kings kept the puck in Boston’s end for a lengthy stretch before Rask made a splendid glove stop on Alex Iafallo’s wrist shot from the slot.

In the overtime, Quick made three big saves. He came across the crease to rob Charlie McAvoy, dropped to spoil Anders Bjork’s partial breakaway and robbed McAvoy again in the closing minute.

Rask also made a few stellar stops – the best came on a close chance by Toffoli.

The Bruins made it 1-0 at 5:27 of the opening period when Marchand skated hard to the net, reached out and redirected McAvoy’s pass from the left boards.

Just under four minutes later, Toffoli tied it for the Kings when he stole Torey Krug’s backhanded clearing attempt, cut to the net and slipped a shot behind Rask.

Like most of the game, both teams tightened even more defensively in the second, limiting the scoring chances.

Rask had to make a couple of nice stops. The first came when he dropped to make a pad save on Andy Andreoff’s bid from the edge of the crease.

With just under four minutes to play, Rask stopped Jake Muzzin’s blast from the point and controlled Adrian Kempe’s rebound bid despite losing his stick in a scramble.

The Bruins seemed determined to shoot high against Quick when they had chances, firing rising wrist shots.

Despite being held to very few chances in the second and only five shots on goal, Boston defenseman Paul Postma’s shot appeared to graze the top of the cross bar late in the period.

NOTES: The Kings started 9-1-1 one other season – in 1980-81 with a loss and tie. … Rask played his 400th career NHL game. … Boston F Riley Nash was checked into the glass between the benches by Kempe and his face shield smacked into his face late in the opening period. He left the ice with a towel to his face, but returned in the second. … Kings D Drew Doughty’s next game will the 700th of his NHL career. … Bruins C David Krejci missed his third straight with an undisclosed upper body injury.

Kings: Play the finale of a six-game road trip Monday at St. Louis.

Bruins: At Columbus on Monday before three straight at home. 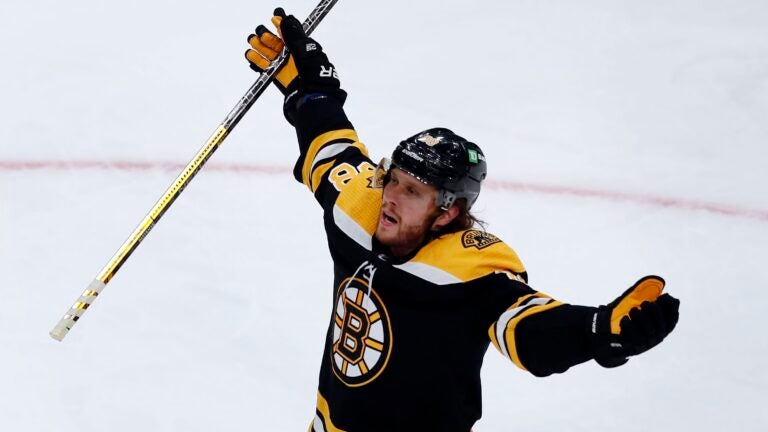