It wasn’t pretty, but the Bruins didn’t need any style points to sweep their weekend slate.

Boston certainly didn’t have the same energy as they did against the Toronto Maple Leafs at TD Garden fewer than 24 hours prior. But Bruce Cassidy’s squad did just enough to outlast the Ottawa Senators in a goaltender battle at Canadian Tire Center.

The Bruins couldn’t seal the deal in regulation despite out-shooting the Senators, 44-28, through 60 minutes. Their hard work paid off in overtime, though, as Torey Krug secured the two points with his second goal of the season in overtime to give the Bruins their second win in as many nights.

“Tonight was a game we stayed patient and then eventually got things to go our way,” the third-year Bruins coach said.

Here is what we learned from Boston’s 2-1 OT victory in Ottawa.

Tuukka Rask is in mid-season form.

?SAVE BY RASK?#NHLBruins Tuukka Rask with the save of the game, robbing #GoSensGo Mark Stone in a tie game! pic.twitter.com/Oiop8DXd5S

Certain sports radio personalities need to find another talking point as Tuukka Rask continues to bounce back from his early-season struggles.

Once again, the Finnish netminder needed to make timely saves as the Bruins offense struggled to find the net a night after putting a six-spot on the Leafs. Rask’s skills were on full display Sunday evening with a 27-save outing that included a plethora of clutch stops.

The 2014 Vezina winner bailed the Bruins out following David Pastrnak’s untimely miscue on the power play that led to a 2-on-1 opportunity the other way. With the game on his stick, Mark Stone received a crisp pass from the high slot and fired a wrist shot labeled for the back of the net. Rask had other ideas while channeling a Patrick Roy impersonation and committed highway robbery to keep things tied at 1-1.

Rask’s performance Sunday night was a microcosm of his play since the start of November. Over his last nine appearances, Rask is 4-3-2 with a .933 save percentage and a 2.00 goals against average. He is looking more calm and confident between the pipes, and that bodes well for the Bruins going forward.

Brad Marchand had his way with the Sens’ D.

Brad Marchand was locked in from the get-go. The two-time all-star frustrated the Senators’ defensemen all night with several quality scoring chances and highlight-reel dangles.

Despite filling up the stat sheet with a team-best 20 assists, Marchand has uncharacteristically struggled to find the back of the net this season. The veteran forward, who notched his eighth goal of the season with his second-period equalizer — Boston’s lone regulation tally — has only scored twice in the last 13 games.

Whether it is was an urge to be unselfish playing alongside Patrice Bergeron and David Pastrnak, or just that he hasn’t been seeing the net as well as previous years, Marchand threw all of that out the window against Ottawa and played like a man hungry for goals. The Halifax native fired at will and would have had more than just one goal on the evening if not for a 42-save performance by Ottawa’s Mike McKenna.

The B’s are buzzing after their disastrous Florida trip.

The Bruins secured four points this weekend with two divisional wins against Toronto and Ottawa and are right back in the thick of things in the Eastern Conference playoff picture. Boston is in sole possession of the top wild card spot and sits two points behind Buffalo for third place in the Atlantic Division.

It wasn’t too long ago — Thursday to be exact — where things went south. The Bruins returned home from the Sunshine State with two back-breaking losses, including a 5-0 thrashing at the hands of the Florida Panthers, and looked anemic offensively.

The Bruins have shown a good amount of character and grit with the way they have responded over the past two games and have seemingly found a remedy for the ailments that derailed them in the Florida.

Most people had written the Bruins off as they prepared for Saturday’s contest against the highly-talented Maple Leafs. But, with their backs against the wall, the Bruins set the tone early and overcame adversity. On Sunday, they gritted out another two points on a night where their goal scoring issues continued.

This was the kind of weekend that the Bruins needed to have after a disappointing Florida trip and gives them a substantial amount of momentum heading into another busy week. 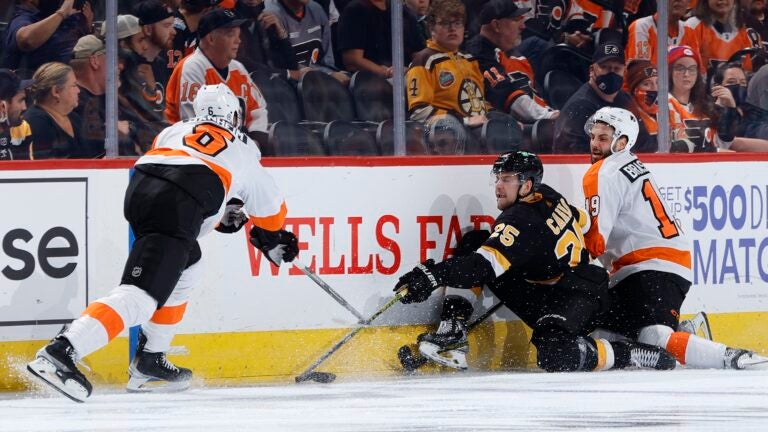 'It's losing hockey': What we learned from Bruins-Flyers