The Boston Bruins headed to Philadelphia Wednesday night looking to erase the bitter taste left in their mouths left by an overtime loss to the hated Montreal Canadiens in their previous outing.

Sean Couturier and the Philadelphia Flyers had other plans.

Despite jumping out to an early 2-0 lead and outshooting the Flyers 42-19, the Bruins unraveled in nearly every aspect.

Couturier led Philadelphia’s furious comeback with a hat trick, his three goals coming on the heels of Oskar Lindbolm’s first-period tally. Rookie goaltender Carter Hart made timely saves — 39 in all — to preserve the victory for the lowly Flyers.

“Well, they finished some plays. When we did break down they had good opportunities, some odd-man rushes. We didn’t get the same finishes at the other end,” head coach Bruce Cassidy told reporters postgame. “Call it they were more opportunistic or their goaltender was better, you can sum it up either way.”

The Bruins missed a golden opportunity to leapfrog the second place Toronto Maple Leafs in the Atlantic Division standings. Here is what we learned from their 4-3 loss in the City of Brotherly Love.

Jaroslav Halak has been a rock for the Bruins thus far this season, yet he allowed four goals on just 19 shots against the last place team from the Metropolitan Division.

The journeyman allowed all four goals at inopportune times, but none were as glaring as Couturier’s third of the night. Halak gave up one of his softest goals of the season late in the third period to give the Flyers an important insurance tally.

Just sneaks under the pad pic.twitter.com/VMni2LWV8b

“I wasn’t happy about the goal,” Halak said. “I just needed to make one big save and I wasn’t able to.”

Halak’s latest blunder is a small sample from his worst stretch of the season. The upcoming bye week can’t come soon enough for the veteran netminder.

Aside from the shorthanded goals allowed, the Bruins’ power play and penalty kill units guided the team through an injury-plagued first half of the season.

Boston didn’t allow a shorthanded goal and scored on the man advantage on David Pastrnak’s team-leading 27th goal. Aside from that first-period tally, the power play and penalty kill had a rough night.

The league’s second-ranked power play unit disappeared in crucial moments — namely on a five-minute attempt following Jori Lehtera’s game-misconduct for boarding Ryan Donato late in the second period — and finished just 1-for-4 on the evening.

“It’s a big swing in the game. I think they get a little bit of momentum and are feeling good about themselves after killing that off,” Krug said about the five-minute power play. “We have to take better advantage of it. It was all about that next pass and we just couldn’t execute. Everyone was just trying to force too much.”

With such a heavy reliance on the success of their special teams units, the Bruins will find it hard to grind out games — especially against playoff caliber teams — without a reliable power play or penalty kill.

The Bruins recalled Peter Cehlarik — who led Providence in scoring this season with 29 points — on Tuesday in hopes he could put a halt around the revolving second-line door.  As Boston suited up in the City of Brotherly Love on Wednesday, Cehlarik didn’t waste any time making his presence felt.

With his aggressive puck pursuit, the 23-year-old showed glimpses of chemistry skating alongside David Krejci and Jake DeBrusk. More importantly, he found the back of the net — twice.

His first tally came on a gritty shift during the opening stanza. DeBrusk beat a defender, took the puck wide and fired a cross-ice pass directly to Cehlarik, who was able to bury a one-timer.

The Slovakian-born winger finished fourth among forwards with 17:40 of ice time to go along with his plus-one rating.

“Yeah, obviously it felt pretty good,” Cehalrik said following his season debut with Boston. “I felt pretty good about how the line was doing all night, too bad we didn’t get that win.”

Is Cehlarik Boston’s long-term fix as a top-six winger? That remains to be seen, but Wednesday marked a step in the right direction. 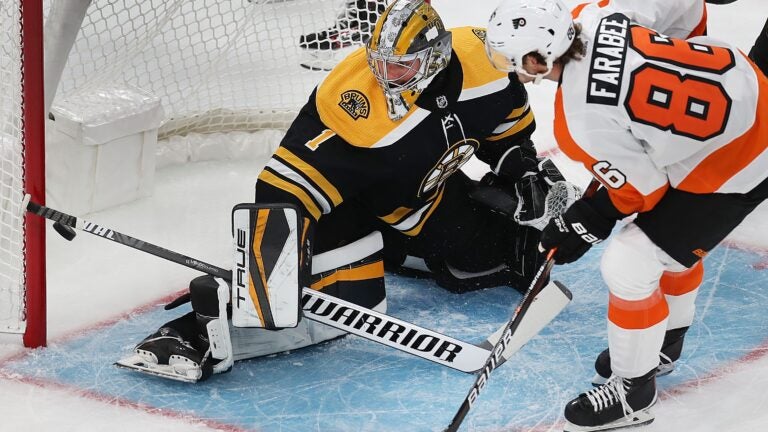 Bruins announce their preseason schedule for 2022