BOSTON (AP) — Troy Brouwer scored a short-handed goal and Roberto Luongo stopped 30 shots to help the Florida Panthers beat Boston 4-1 on Saturday and hand the Bruins their first loss at home since January.

Noel Acciari scored and Tuukka Rask made 19 saves for Boston, which has already clinched a playoff berth and will most likely open the postseason at home against the Toronto Maple Leafs. The Panthers, who have already been eliminated from playoff contention, have won two straight to snap a four-game losing streak.

Riley Sheahan and Evgenii Dadonov scored about two minutes apart late in the first period to give Florida a 2-0 lead. It stayed that way until Acciari used a backhand swipe to beat Luongo and cut the deficit to one goal.

But just 1:07 later, with the Bruins on their first power play of the game, Brouwer was the first one to reach a puck that caromed out to center ice. He skated into the zone, faked a slap shot and then beat Rask with a wrister on the stick side to give the Panthers a 3-1 lead.

Dadonov added an empty-netter with 2:19 left to clinch it.

With 10 minutes left in the game, the Bruins had the puck behind Luongo before it was swept off the goal line by a defender. Luongo sprawled to the ice, losing his stick in the process, but Boston wasn’t able to get off a shot while he was out of position.

Boston’s 12-game home win streak was its longest since 2008-09. … Bruins F Chris Wagner won the team’s 7th Player Award, selected by a fan vote, for exceeding the expectations of Bruins fans during the season. Wagner, who signed as a free agent last summer, has a career-high 12 goals and six assists. He leads the Bruins and is ninth in the NHL with 245 hits. … Florida will play its last three games of the season at home. … Bruins F Brad Marchand was so upset at a play in the second period he slammed his stick against the boards as he returned to the bench, sending the blade flying back toward center ice. 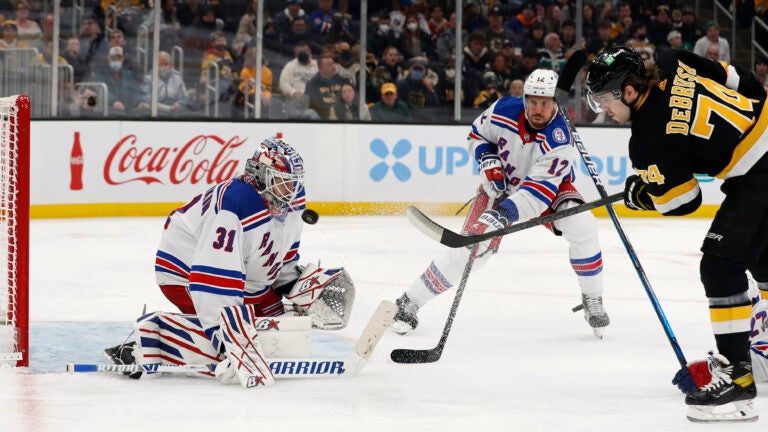