Nazem Kadri and Jake DeBrusk wanted nothing to do with each other Saturday night.

Or perhaps they wanted everything to do with each other.

The two forwards got into it multiple times during Boston’s 4-1 win in Game 2 of their first-round playoff series at TD Garden. Midway through the first period, the two got tangled up when DeBrusk tried to poke the puck away from Kadri along the boards. Both ended up on the ice, and an official had to separate them. Each player received a roughing penalty for the scuffle.

Jake DeBrusk lands a punch on Nazem Kadri during the first period.

The scuffling escalated at the end of the second period when the two met again in the Bruins’ O-zone. Upon racing out of the penalty box, serving time for his second of four infractions on the night, Kadri disrupted Bruins center David Kreciji’s shot attempt but was quickly upended by an apparent knee-to-knee collision with DeBrusk.

No penalty was called, though some argued DeBrusk’s actions should have warranted a whistle.

“Obviously, it looked like a knee-on-knee to us,” Leafs center John Tavares said. “It is what it is.”

“Right when it happened, just judging by the way Naz went down, it didn’t seem great, but I haven’t watched the replay,” added defenseman Morgan Rielly. “I talked to the ref. He said [Kadri] jumped and it was just a big hit. It is what it is. That stuff happens.”

Kadri immediately grabbed his left knee after the hit and stayed down on the ice for a moment before paying a visit to Toronto’s dressing room. As he skated to the bench, boos from the sellout crowd came raining down.

Nazem Kadri looks up from the ice as he is attended to by a trainer.

Kadri seemed to be OK, eventually returning to the bench to start the third period. With just over nine minutes remaining, he notched the Leafs’ lone goal of the game with a deflection. There were few signs of celebration, however, as the increasingly fed-up Kadri slammed the bench door closed at the end of his shift.

“It’s a physical game,” Leafs coach Mike Babcock said. “The referees, the way they reffed the game, they let a lot of that stuff go, obviously. In the end, you can’t let that get in the way of what you’re doing. Playing in the Stanley Cup playoffs isn’t supposed to be easy. And it’s worth it.”

The night seemingly took a step too far with just under six minutes remaining in the third period. After Bruins youngster Karson Kuhlman’s missed shot on goal, Kadri went in for a cross-check that left DeBrusk on the ground holding his head. He was promptly ejected for game misconduct, while DeBrusk required assistance standing up and was helped off the ice.

“It’s all kind of blur, to be honest,” said DeBrusk, who seemed noticeably foggy and could only remember that he felt Kadri’s hit high and in his face.

DeBrusk said he took a series of tests after the game and is unsure about his status for Game 3 on Monday. Kadri’s status is also in question, as the 10-year veteran, who has spent his entire NHL career in Toronto, will likely face a suspension for his actions. The 28-year-old has a track record of suspensions and fines for disciplinary reasons.

The department of player safety announced after the game Kadri has been offered an in-person hearing — date and time to be determined — for the cross-check. During last year’s Leafs-Bruins series, Kadri was suspended three games for a hit on former B’s forward Tommy Wingels in Game 1.

“I think that’s up to the league to decide to be honest,” DeBrusk said. “I got no comment on that.”

Kadri did not participate in interviews after the game, but his teammates expressed general uncertainty about the potential punishment. Several said they hadn’t yet seen play in question. If Kadri is unavailable, Babcock said his two options for a replacement center will be his linemates Patrick Marleau and William Nylander.

“Naz is a crucial part of a team,” Tavares said. “Whatever the circumstances are, we believe in the guys in our locker room.”

Medical personnel assists Jake DeBrusk after he was checked in the head by Nazem Kadri.

Nazem Kadri leaves the ice after being ejected during the third period of Game 2. 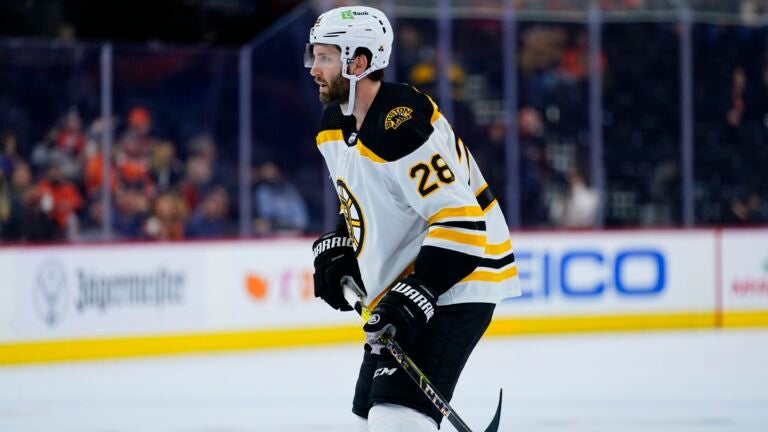 3 takeaways as the Bruins notched yet another 5-2 victory