The Celtics completed the sweep of the Pacers 110-106 on Sunday in the team’s first round playoff matchup. Boston now advances to play the either the Bucks or Pistons (Milwaukee currently leads the series 3-0).

Tatum slams it home following the ridiculous steal by Kyrie in today’s Play of the Game! ? pic.twitter.com/7fDSD0NBTD

The Bruins won in Toronto 4-2 against the Maple Leafs to force a Game 7 in Boston on Tuesday at 7 p.m.

And the Red Sox completed a timely three-game sweep of the Rays with a 4-3 win in 11 innings. It helps halt both an early-season Boston slide (the Red Sox are now 9-13) while also checking the Rays’ hot start (though Tampa remains an A.L. East best 14-8).

Brad Marchand’s thoughts on the TD Garden ice: The Bruins staved off elimination with a 4-2 Game 6 win over the Maple Leafs on Sunday in Toronto. The series is tied 3-3, but each team is curiously 1-2 on home ice.

Brad Marchand didn’t hold back in describing his thoughts on a possible reason for why the Bruins haven’t been as successful at TD Garden.

“They’ve played really well in our building so far this series. The ice has been terrible there so, you know, might as well play with a tennis ball,” Marchand said in the postgame press conference. “We’ll just skate around and see who bounces one in the net.”

Marchand admitted the ice has been better according to his standards in Toronto, asking “can we do that in Boston?“

Charlie McAvoy also weighed in on the Garden ice:

Lots of talk of bad Garden ice after the game.

McAvoy: “Sometimes the ice is good or bad, it’s not like you can get an unfortunate bounce and they blow it dead and say it wasn’t fair.”

Marchand: “Ice has been terrible there, might as well play with a tennis ball.”

Also of note was Marchand’s style choice during the press conference, where he went without shoes:

Brad Marchand after two goals and an assist at the podium sans shoes.#NHLBruins #NHL pic.twitter.com/2zK3PQXJah

Trivia: Mitch Moreland leads the Red Sox in 2019 so far with seven home runs. He hit his first career MLB home run on Aug. 13, 2010 against which Red Sox pitcher? (The answer is at the bottom of the article).

Hint: The pitcher, now retired, won MVP of a World Series during his 14-year career. He was drafted second overall in 1999.

Gordon Hayward savors his homecoming: An Indiana native who – with Brad Stevens – helped a local school reach an NCAA Tournament championship, Gordon Hayward knew that playing against the Pacers was a special matchup. As Boston swept its first round opponent on Sunday, Hayward played a significant role in front of his hometown fans. [Boston Globe]

Hard to dispute the caption here:

Orioles first baseman Chris Davis recorded a strikeout on Sunday as a pitcher:

On this day: In 1876, the National League formally began in baseball with Boston playing Philadelphia. The “Red Stockings” defeated the Athletics, 6-5. The fate of the Red Stocking – who later became a late 19th century dynasty as the “Beaneaters” – was not to become the Red Sox, but instead the Boston Braves. Eventually, the team moved to Milwaukee before settling in Atlanta.

The Athletics would also go on to move twice, first stopping in Kansas City before finishing the continental shift by finding a home in Oakland.

Daily highlight: After linking passes in the build-up, David Krejci found Jake DeBrusk cutting to the goal. DeBrusk’s lunging finish was impressive, and gave the Bruins a much needed two-goal cushion. 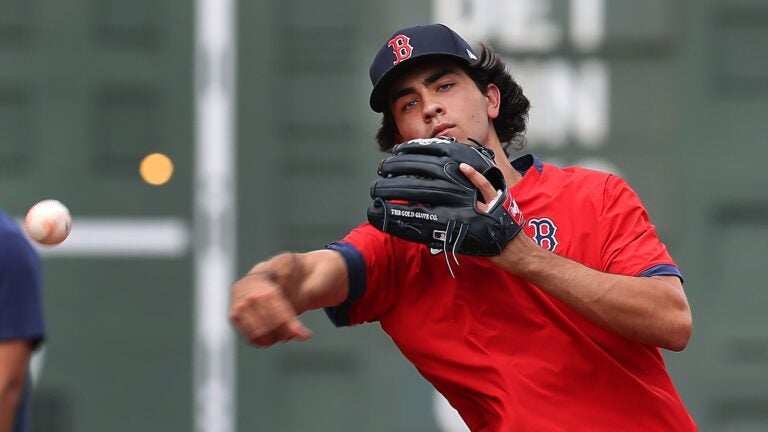