BOSTON (AP) — Charlie Coyle tied it in the final five minutes of regulation and scored again with 5:15 gone in overtime on Thursday night to lead the Boston Bruins to a 3-2 victory over the Columbus Blue Jackets in Game 1 of their Eastern Conference semifinal series.

Tuukka Rask stopped 20 shots for Boston, which took a 1-0 lead on Noel Acciari’s short-handed goal in the first period, but then fell behind in the third after Riley Nash and Pierre-Luc Dubois scored in a span of 13 seconds.

Sergei Bobrovsky made 34 saves for the Blue Jackets, who swept the Presidents Trophy-winning Tampa Bay Lightning in the first round.

Game 2 is Saturday night in Boston before the best-of-seven series moves to Columbus for Games 3 and 4.

The Blue Jackets were the last team to qualify for the NHL playoffs, then they knocked out the Lightning in four games for their first-ever playoff series victory. While Columbus waited more than a week for an opponent, Boston tangled with Toronto for seven games before finally advancing on Tuesday night.

But the Bruins didn’t seem tired, outshooting Columbus 12-1 early in the game and scoring short-handed midway through the first after Coyle was sent off for hooking. Acciari brought the puck into the zone with Joakim Nordstrom waiting for the centering pass, but Acciari snapped off a wrist shot that beat Bobrovsky on the stick side.

It remained 1-0 until Nash forced a turnover at the blue line and then deflected a shot from Seth Jones past Rask to tie the score with 12:21 left in regulation. The Blue Jackets were right back at it after the faceoff, bringing the puck the length of the ice from behind their own net before Artemi Panarin’s slap shot deflected off the back of Dubois’ leg and into the net. 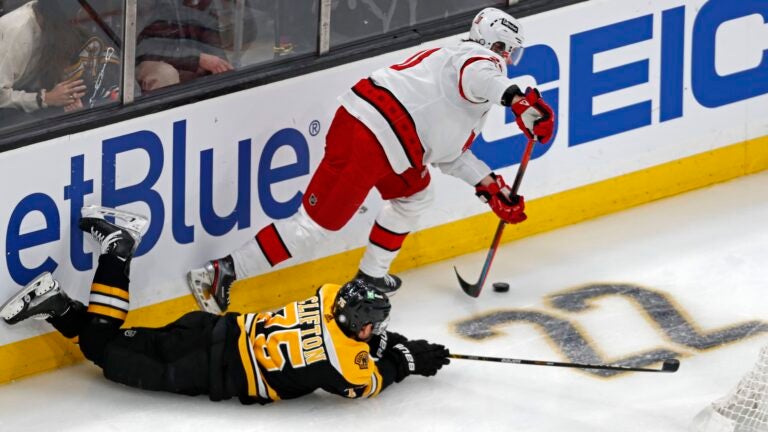