It wasn’t pretty by any stretch of the imagination. But the Boston Bruins, fresh off their first set of back-to-back losses this postseason, fought their way to a series-tying win in Game 4.

The Bruins needed their best players to shine in the pivotal tilt in Columbus to even the series. They wasted little time getting to work as David Pastrnak and Patrice Bergeron — who finished with a pair of timely tallies — lifted the team to an early two-goal lead.

The Blue Jackets didn’t go down lightly — not without controversy — and cut the deficit in half before the first intermission. But Tuukka Rask stood tall in one of his better performances of the postseason en route to a 39-save outing.

Sean Kuraly netted yet another big-game goal down the stretch, and Bergeron added his second of the game in the final minutes of regulation to seal the 4-1 win.

Patrice Bergeron cashes in again on the power play.

“Our execution all over the ice and obviously capitalizing on our chances was key for us tonight,” Bergeron told NBC Sports postgame.

“We believe in our group,” Brad Marchand told reporters after the game. “We have a good team all the way around. Everyone expects to pull their weight and do their job.”

Here’s what we learned as the series heads back to Boston tied at 2-2.

This game started and ended with Boston’s veteran puck stopper.

With the way Sergei Bobrovsky has played, it’s going to take lights-out performances from Rask for the Bruins to have a chance. And the Finn was up to the task Thursday night.

Nothing phased Rask in Game 4. His calmness under pressure all night lifted the Bruins at times when they needed it. Artemi Panarin’s controversial goal in the waning minutes of the opening stanza marked Rask’s only blemish of the evening.

Make no mistake about it. Rask earned his first-star honors on this night.

Columbus threw the proverbial kitchen sink at the 31-year-old, but his confidence never wavered. The Blue Jackets had a plethora of opportunities to climb back into the game, but Rask shut the door time and again.

His most notable save came at an unexpected time in the opening stanza. Marchand dragged down Boone Jenner for a penalty-shot opportunity just 14 seconds into Boston’s first power play of the evening.

It didn’t matter. Rask tracked Jenner the whole way and made a massive blocker save to preserve Boston’s 1-0 lead.

His job was far from over. Rask weathered a slew of flurries in the second and third periods. The Bruins finally pounced on Kuraly’s tally to give Rask a much-needed cushion to work with.

“It’s about wins at this point of the year,” Rask said postgame. “We just try to grind it out. We knew we needed one out here. It’s best of three now.”

Bobrovsky dominated the goaltending discussion through the first three games of the series — and rightfully so. But Rask matched his goaltending counterpart stride for stride and earned his stripes in Game 4.

This series has slowly turned into a goaltender dual more so than a star-studded offensive affair. It may come down to the last goalie to blink as the Bruins and Blue Jackets embark on a de facto best-of-three series starting Saturday night at TD Garden.

The Bruins’ big guns needed to make an appearance in the series after tallying just a single point through three games. The inevitable talking point turned into reality Thursday night.

Bergeron, Marchand, and Pastrnak — in their first full game together in Round 2 — finally looked the part on the scoresheet with their combined five-point effort (three goals, two assists).

Pastrnak started Boston’s night with his patented power-play one-timer from his office at the left faceoff circle.

Takes the hit, scores the goal. ? with the big opening tally.@pastrnak96 | #NHLBruins pic.twitter.com/rEbzPji1FI

“It’s always great to score the first goal, especially on the road,” Pastrnak said about his tally. “Really happy with our outcome.”

A step in the right direction, sure. But the top line isn’t off the hook yet. Pastrnak’s turnovers, Marchand’s penalties, and a lack of consistency still plagued the Bruins at times during Game 4.

The Bruins got a needed lift from the bottom six to start the series. They’ll need their top six to step up as the second-round matchup enters crunch time.

In hindsight, the Bruins should have won this game far more comfortably than they did.

Bruce Cassidy’s squad earned six power-play attempts in Game 4. They scored twice, yet it didn’t really feel like a team converting on 33 percent of their chances with the man advantage. Instead, Boston’s power play got caught giving up too many shorthanded chances and couldn’t sustain a rhythm.

Boston’s self-inflicting turnovers — a sore spot with the power play all year despite having the third-highest success rate during the regular season — nearly came back to haunt them. Rask made six of his 39 saves while the Bruins had a chance with the man advantage.

“I like the goals, I like the way we established ourselves, but we have to be better,” Bergeron said. “Too many chances on their side. When you are on the power play, you have to get some momentum for your team, and I think there is another step for us on the power play.”

Pastrnak’s puck mismanagement marked the biggest head-scratcher of the night. The 22-year-old, again, coughed up the puck a handful of times whiffing on passes and shot attempts. The dynamic playmaker hasn’t been himself during the postseason, despite earning his second goal in his last three games on Thursday.

Boston’s power play, which came in 1-for-9 in the first three outings, somehow found the net twice in Game 4. The Bruins showcased confidence at times with the man advantage, just like they did in the regular season and in their first-round series with the Maple Leafs. They’ll need more of that confidence against Bobrovsky and a stingy Columbus D — and not showcase their passiveness with the man advantage — in Game 5. 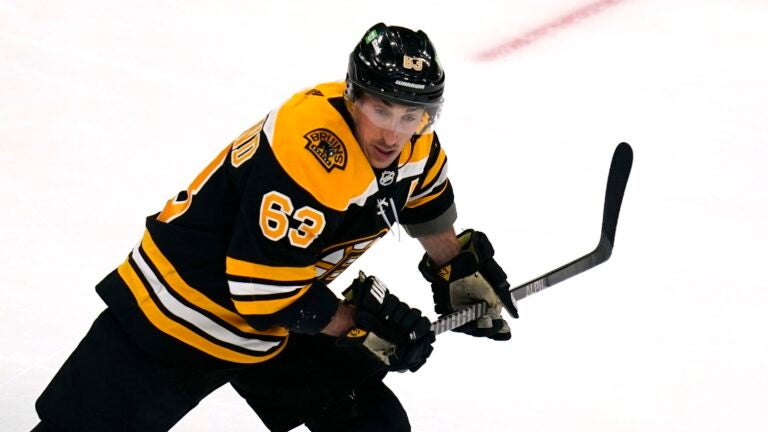 Brad Marchand out for six months following surgery on both hips