St. Louis Blues forward Oskar Sundqvist has been suspended one game for his hit from behind on Bruins defenseman Matt Grzelyck in Game 2 of the Stanley Cup Final, the NHL’s department of player safety (DoPS) announced Thursday evening.

The punishment comes a day after Sundqvist was whistled for boarding late in the first period of Boston’s 3-2 overtime loss Wednesday. With the puck behind Boston’s net, an off-balance Grzelcyk looked to gain possession when Sundqvist sent him crashing into the glass. Grzelcyk immediately grabbed his helmet before falling to the ice. He stayed down, holding his head, before exiting the game.

St. Louis’ Oskar Sundqvist has been suspended for one game for Boarding Boston’s Matt Grzelcyk. https://t.co/2W0ZLnn9fI

Grzelcyk did not return to action and was transported to Massachusetts General Hospital. Coach Bruce Cassidy announced on Thursday morning that he has entered concussion protocol and will not travel with the team to St. Louis.

“We’re going to list him as day to day,” Cassidy said at Warrior Ice Arena.

DoPS said the hit was worthy of a suspension because Sundqvist chooses to “finish his check with force,” even though he had ample time to adjust his path to “minimize the force of the hit, avoid the hit, or adjust his course to deliver a legal check.”

“This is not a situation in which a sudden and unexpected movement by the player receiving the check turns a legal hit into an illegal one at the last moment,” the league said in its explanation video released Thursday night

Cassidy said he has not decided who will replace Grzelcyk if he’s unable to play in Game 3 Saturday night. John Moore and Steven Kampfer were floated as possibilities. Cassidy said Friday afternoon’s practice at Enterprise Center will be a “good indicator” of the lineup.

Choosing Moore, who shoots lefthanded, would be the “easiest thing,” per Cassidy, because it would allow all defensemen to remain on their strong sides. Moore has played in five games this postseason, registering an average time on ice of a little less than 13 minutes.

Forward Joakim Nordstrom said he was feeling “pretty good’’ after blocking a pair of shots with his leg during a 63-second stretch of a four-minute penalty kill in the second period of Game 2.

“Maybe a bruise or so, but nothing more than that,’’ Nordstrom said. “Just trying to do whatever it takes to keep the puck out of the net, and I was lucky enough to be there in the right spot twice.’’

Nordstrom’s performance Wednesday continued the trend of Bruins sacrificing their bodies to fend off attacks, drawing comparisons to Gregory Campbell in 2013 and Chris Wagner earlier this postseason.

St. Louis has festivities planned for Game 3 and 4.

Indie pop band Echosmith will perform at an outdoor viewing party downtown before Game 3, and Grammy Award-winning musician Gary Clark Jr. will take the stage before Game 4. St. Louis native and “The Voice’’ finalist Kennedy Holmes is also expected to lead the crowd in a singalong of the late Laura Branigan’s “Gloria,’’ the Blues’ victory song.

“There’s a buzz there in St. Louis right now,’’ Bergeron said. “We’ve been through it before. I think for some of the young guys, Carolina was very loud. It was a loud building, not necessarily easy to play in. I think it’s always about simplifying your game and taking it not a shift at a time, but a period at a time.’’

Bergeron said the first goal is “always huge,’’ perhaps even more so on the road when a score can quiet a rowdy home crowd. Bergeron’s line has been quiet through two games, but Cassidy is expecting big things come Saturday.

“They don’t usually go very long without being a factor,’’ Cassidy said. “I don’t imagine that will change. I suspect in Game 3 we’ll see their best game of the series.’’ 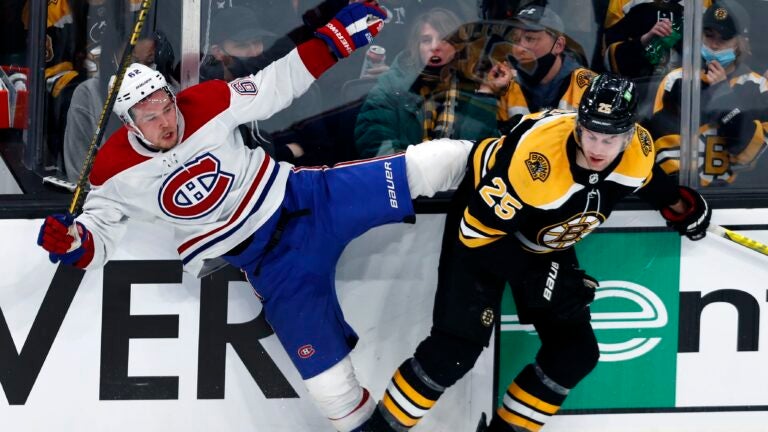 3 takeaways from the Bruins' 5-1 drubbing of the Canadiens