ST. LOUIS (AP) — Patrice Bergeron wins the faceoff and Jake DeBrusk retrieves the puck for Torey Krug, who waits just long enough for Bergeron to set up and shoots it at his stick for a textbook deflection goal.

This is the Boston Bruins’ masterful power play at its nearly unstoppable best.

When the Bruins go on the power play, it’s poetry in motion on the ice that comes from a combination of detailed coaching and planning, high-end talent and exquisite execution.

4 shots on 4 power plays for 4 goals on the night for the @NHLBruins as they cruised to a 7-2 win over the @StLouisBlues. It all got started with this one by Patrice Bergeron. Bs now lead the #stanleycup final series, 2 games to 1. Twitter | @NHL pic.twitter.com/OgdX0HBmox

Boston scored with precise efficiency on all four of its power-play chances in a 7-2 rout of the St. Louis Blues in Game 3 and is the biggest reason the Bruins lead the Stanley Cup Final 2-1 going into Game 4 Monday night.

“It’s just the creativity and guys stepping into certain roles, certain spots, and we fill in for each other,” Krug said. “When we’re on and we’re in sync, we’re a really dangerous unit.”

Toronto, Columbus and Carolina already figured that out in the first three rounds, and St. Louis needs to develop a solution or this series will be over quicker than Krug can move the puck.

Boston’s playoff-best power play has converted on 35.9% of its opportunities and could be the first unit to finish over 30% in the postseason since the 1981 champion New York Islanders.

“We just have a lot of different abilities and talents out there,” puck retrieving ace Brad Marchand said. “We’ve been together for a while now, so we’re comfortable with communicating and trying to look for different things. With Torey back there making the plays that he’s making, we get lucky sometimes.”

This has nothing to do with luck.

Bruce Cassidy is a power-play mastermind who can spot trends and flaws as well as any coach in the NHL. After the Bruins scored on two of their 10 power plays in Games 1 and 2, he noticed a hole in the Blues’ penalty kill, made some adjustments and, boom, Boston scored four power-play goals … on four shots.

? Hear from Bruce Cassidy as he discusses the #NHLBruins special teams and the team’s approach ahead of Game 4: pic.twitter.com/XIujTfkveo

“We’ve been able to, after 10 power plays through two games, point out some things. Without giving it away, we’re trying to take advantage of it now.”

Cassidy said his power play operates differently from a lot of other hockey teams because it relies more on puck movement down low than a blast from the point.

Blues penalty killer Ryan O’Reilly noted the Bruins worked more from Krug at the point in Game 3 and it caught them off guard.

Here’s how they did it:

Bergeron’s tip was a set play Cassidy drew up off a faceoff win that players executed to a T.

Krug’s wrist shot developed off a give-and-go with Marchand after he found open ice and snapped it past goaltender Jordan Binnington.

Marcus Johansson’s one-timer against a fatigued Blues penalty kill happened when David Backes retrieved the puck, Johansson and Krug passed it back and forth like practice and goalie Jake Allen had no chance of stopping the puck.

“We put the puck on net and when you do that, good things happen,” Bergeron said. “It was four different ways, the way we scored. I think we’re trying to take what’s in front of us instead of forcing plays.”

The video clips of Boston’s power play could fill a seminar on how to score 5-on-4 in the NHL. And the Blues know it.

“They can beat you so many different ways,” St. Louis defenseman Robert Bortuzzo said. “They got a great net-front guy in Bergeron who’s always scoring around the net. They got Krug who can blast it, Pastrnak can blast it and Marchand’s just a heady player. Those are the toughest power plays to defend.”

You can’t stop them, you can only hope to contain them. And even that’s not working out for St. Louis, which was the least-penalized team through three rounds and has taxed its penalty kill with 17 minors through three games.

“There’s so many different ways that they’re coming at you, so you’re going to play them a bunch of different ways,” Bortuzzo said.

“Limiting entries is the big one for our group. I think we can make them put pucks in and then have them get to set up. That takes time and sometimes it’s frustrating and it’s something we build off, so I think being good at the blue lines is big for us.”

Or the Bruins make entries irrelevant because they don’t let the puck leave the zone. The NHL a few years ago instituted the rule that all power plays begin with a faceoff in the attacking zone as one way to generate more offense. The Bruins are the perfect example of that: They won five of six power-play faceoffs in Game 3 and scored goals 21, 51, 31 and 23 seconds into each chance.

“I have to be better in the circle taking those faceoffs to not give them any easy opportunities,” O’Reilly said.

The St. Louis coaching staff will have to make some adjustments after the penalty kill looked lost Saturday night. But much of that credit belongs to the Bruins’ No. 1 power-play unit of Bergeron, Krug, Marchand, Pastrnak and DeBrusk.

The #NHLBruins scored four power-play goals and @ToreyKrug made history during a 7-2 win over the Blues in Game 3 of the #StanleyCup Final.

? All of the highlights from last night’s victory in St. Louis: pic.twitter.com/ZfNt688Imi

“They support one another really well, they retrieve pucks that have turned over exceptionally well,” said Grimson, an NHL Network analyst who scored one power-play goal in 771 games.

“It’s a mix of chemistry and great anticipation, especially when those top three guys are out there together. It all kind of centers around Bergeron. He’s kind of critical to it all. But the others. Between Pastrnak and he’s your high-end skill and Marchand on the other side is great at recovering pucks, it’s just a great balance of everything that kind of makes up a really lethal power play.”

Going 2 for 10 in Games 1 and 2 is nothing to sneeze at, especially considering St. Louis is 1 for 10 in the series. But Krug chalked up the 4-for-4 breakout to a keen adjustment and better assertiveness and decision-making.

It’s also that the Bruins’ power play operates like clockwork and fuels everything about their offensive game.

“They know that they have the ability to score and generate offense,” Cassidy said. “One of the ways you get going offensively is to finish your chances and to get going on the power play. We talked about that. It’s not unique to our team. Most skilled guys, if they get to feel the puck on the power play, things start to happen. I think it bleeds into 5-on-5.” 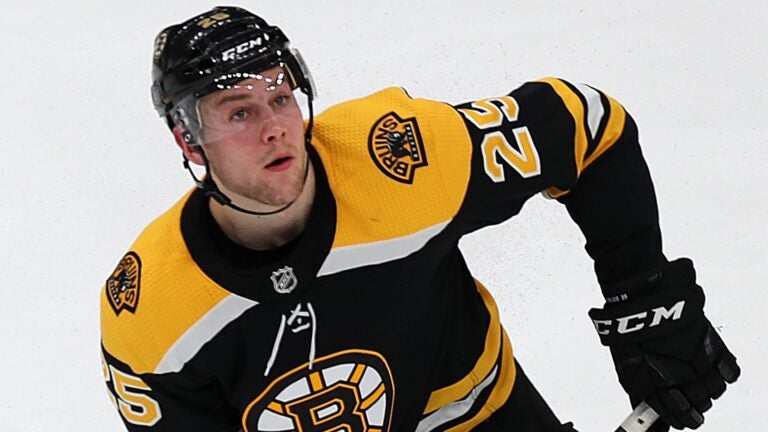 The next tier of Bruins’ leaders is here