The series morphs into of a best-of-three now, and TD Garden will host Game 5 Thursday. Game 7, if necessary, is scheduled for Wednesday, June 12, in Boston.

The Bruins have major question marks in their lineup ahead of Thursday’s game after injuries to defensemen Matt Grzelcyk and Zdeno Chara, the team’s captain.

Here is what NHL experts and columnists are saying about Game 5:

Benjamin Hochman, St. Louis Post-Dispatch: “Thursday’s game is the biggest game in St. Louis Blues history. To take a 3-2 lead back home would be a bigness too tough to put in proper perspective until . . . or if . . . it actually happens.”

The Blues carry resolve into Game 5 of the Cup Final after out-hitting, out-skating, and out-playing the Bruins in Game 4, writes Hochman. If they control the puck, stay out of the penalty box, and avoid turning over the puck, he believes the final three games will ultimately play out in the Blues’ favor.

To Hochman, St. Louis smells blood in the water after Chara’s injury in Game 4 leaves him uncertain to play Thursday. The Blues are out-hitting the Bruins through four games (162-133) and if they continue to play that way, captain Alex Pieterangelo and his teammates “can out-skate, outlast, hit them quick and get out fast.”

Hochman notes that historically, the winner of Game 5 wins the Cup 72 percent of the time and that while the Blues seem capable of winning, nightmares of the team’s past near-misses still come to mind when dreaming of the old trophy coming to St. Louis.

Christopher L. Gasper, The Boston Globe: “With Chara possibly missing more of the series or compromised for the rest of it, the remaining members of the team’s Foundational Five of Chara, Patrice Bergeron, David Krejci, Brad Marchand, and Tuukka Rask — all of whom were on the team the last time the Bruins lifted Lord Stanley’s cherished silver chalice in 2011 — need to rise to the occasion.”

When Chara left Game 4 with an injury after he was hit in the face by a puck, the Blues’ forecheck applied pressure the Bruins could not withstand. Chara returned to the bench for the third period, but he did not skate another shift. The Blues’ 4-2 win brought the series to a tie. Uncertainty surrounding Chara’s status has created uncertainty about the Bruins’ chances over the final three games of the Cup Final.

Gasper writes that Boston teams have seen key injuries derail championship efforts before – Kendrick Perkins’ torn ACL in the 2010 NBA Finals ultimately ended with the Celtics losing their bid for an 18th title – and in this instance, Chara’s absence only means the other members of the Bruins’ core must lift the team up.

Bergeron, Marchand, and David Pastrnak have struggled to find consistent offense. Krejci has been held without a point. If neither Chara nor Grzelcyk can play, Gasper writes, the onus is on those four players to lead the team.

“The Spoked-B’s have to buckle down and bring their A game whether or not the man who wears the captain’s C takes the ice,” Gasper writes.

Fluto Shinzawa, The Athletic: “In a perfect world, Chara and Grzelcyk would be ready for Game 5. This is the NHL playoffs. Perfection does not exist.”

Shinzawa breaks down five different scenarios Bruce Cassidy and the Bruins could face Thursday depending on the availability of their two injured defensemen. The most favorable – and least likely – option is that both Chara and Grzelcyk play, in which case Cassidy will play his ideal defensive pairings together.

If Chara plays and Grzelcyk remains out, the defensive pairings will remain as they were for Games 3 and 4. If only Grzelcyk is available, Shinzawa’s educated guess is that Cassidy would pair him with Charlie McAvoy and reunite an old Boston University defensive pairing.

If neither Chara nor Grzelcyk can play, Cassidy will likely decide between dressing veteran Steven Kampfer for just the third time this postseason or throwing 20-year-old rookie Urho Vaakanainen into the fire in order to place a left-handed defenseman on the ice. Shinzawa writes the final option is Cassidy dressing both players and scratching a forward, most likely David Backes, who has skated less than ten minutes on average the last four games.

“Throughout the series, Cassidy has double-shifted Pastrnak in Backes’ spot on the second line,” Shinzawa writes. “This could be the way the Bruins proceed if they dress seven defensemen.”

Tom Timmerman, St. Louis Post-Dispatch: “With the series now having become a best-of-three series, the margin for error is reduced even more. At this point, it could be a very fine line between winning the Stanley Cup or having an offseason of heartache.”

Timmerman writes that through four games in the Stanley Cup Final, each team has successfully responded to a loss the previous game. Neither the Bruins nor the Blues have won two games in a row. Whichever team successfully responds in Game 5, Timmerman writes, will suddenly see the Stanley Cup within their grasp. Ultimately, the difference between the winning team and the runner-up could come down to the smallest of details.

“The inside chances they got (Monday) made a difference, every goal they scored they drove the net, got a second chance,” Cassidy told the St. Louis Dispatch. “We gotta do a better job with that. When we’ve been at our game we’ve used our speed and skill on the forecheck, created turnovers and got inside as well. So that’s how I see it: who’s willing to get in there and create a little puck luck for themselves and that’s usually what it comes down to this time of year.”

Ty Anderson, 98.5 The Sports Hub: “The Bruins’ solution is to scratch one of their 12 forwards and load up with an extra defenseman.”

Deviating from the NHL-standard 12 forward and six defensemen in a lineup certainly falls out of the ordinary for any game, never mind Game 5 of the Cup Final, but Anderson views it as the best way to solve what he sees as an obvious problem. When the Bruins have lost defensemen to injury mid-game (Grzelcyk in Game 2, Chara in Game 4), they have been badly out-shot. When Cassidy has had six healthy defensemen available, the Bruins held an advantage.

Anderson writes that playing seven defensemen allows for some insurance if one went down with an injury in Game 5 and allows for the Bruins to get a left-handed shot (Vaakanainen or Jeremy Lauzon) in the lineup without subjecting an inexperienced player at the NHL level to extreme pressure by allowing Kampfer to play, too.

The most likely forward to sit as a result, according to Anderson? Backes.

“The truth is that the Bruins are getting absolutely crushed by the Blues on almost every single shift, and the presence of the ex-Blues captain has done absolutely nothing to deter the Blues,” Anderson writes. “Fourth-line center Oskar Sundqvist returned from his suspension with just as much physicality as he had when he concussed Grzelcyk in Game 2, and the Blues were not afraid to wrestle with Backes at every stoppage.”

Pete Blackburn, CBS Sports: “The trends point in favor of the Blues, but trends haven’t exactly delivered or been consistent in this series. There’s been a huge unpredictability factor.”

Blackburn writes that it’s hard to predict where the Cup Final is headed. The Blues won Game 4 by implementing their aggressive forecheck, and Bruins fans would not be faulted to want to press the panic button in the face of playing Game 5 without Chara or Grzelcyk. Still, the Blues have not played the way they did in Game 4 consistently.

According to Blackburn, the only consistency is the Bruins’ dominance on special teams, which is why the key for the Blues is staying out of the penalty box. The Blues were assessed 16 penalties through three games but only went to the penalty box three times in Game 4.

St. Louis is getting production from the team’s top players, while the Bruins still need more out of Krejci and Bergeron’s lines.

“If the Blues can play disciplined, avoid taking unnecessary penalties and just stick to playing between the whistles, they should be in good shape,” he writes. 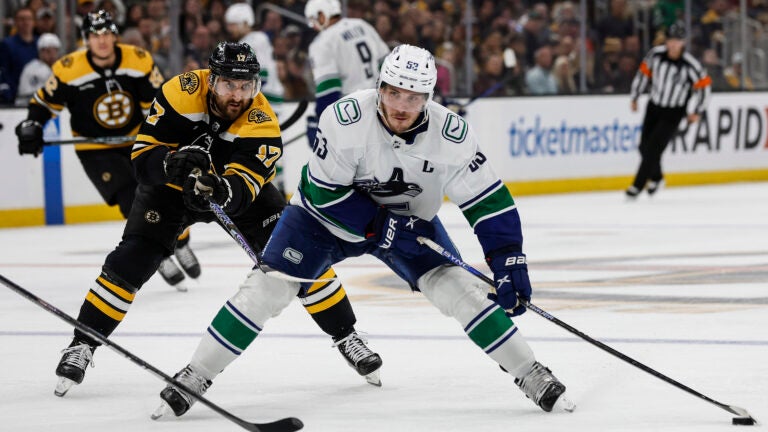