The San Jose Sharks had just been knocked out of these 2019 playoffs, bruised and beaten after a punishing series with the St. Louis Blues, who had injured some of their best players, when coach Pete DeBoer made an observation about the two teams still standing.

“I think the two hardest, heaviest teams are in the Final,” he said of the Blues and Boston Bruins. “Everyone talks about skill and all the small players, and there is room for that, but I don’t think it’s an accident.”

After DeBoer’s Sharks took a 2-1 series edge in the Western Conference finals, they faded against a bigger and badder Blues team, dropping three straight games and unable to overcome the injuries to forwards Joe Pavelski and Tomas Hertl and defenseman Erik Karlsson in the clinching Game 6. For a second straight Stanley Cup Final, physicality has played a pivotal role, reminding all that there’s not only still a place for it in a league but that it’s actually an ingredient for success.

Every member of the Blues’ blue line stands over 6 feet and weighs more than 200 pounds, led by the 6-foot-6, 230-pound Colton Parayko. Joel Edmundson, Jay Bouwmeester and Robert Bortuzzo are all 6-foot-4.

“We believe in big defense,” St. Louis general manager Doug Armstrong said last week. “We have had a lot of big defensemen over a number of years. It’s probably not as physical of a game as it was, but they’re like seaweed – they’re tough to get through back there.”

The Bruins have the 6-foot-9, 250-pound Zdeno Chara on their defense, but outside of him, their lineup is smaller and shiftier than St. Louis’. It can still play big, however, like when the 5-foot-9 Torey Krug skated down the ice without his helmet and flattened Blues forward Robert Thomas in the most heralded hit of the series.

The #StanleyCup Final: Not for the faint of heart. pic.twitter.com/EdELyKCUvQ

“I think you need a blend,” Armstrong added. “A number of years ago, you would have maybe one or two skating defensemen and four defenders and then it goes to three and three and maybe four and two. You have to evolve with the game. I think also coming out of one of the work stoppages it became a smaller man’s game, and I give credit to the bigger players. They got quicker, they got smarter, they got better, and size is always still a factor.”

Back-to-back championships by the Pittsburgh Penguins (2016 and 2017) sparked a league-wide shift to a fast, counterattacking style, but then last year, the Washington Capitals won with a balanced attack, able to beat teams with rush plays while also wearing down opponents over a playoff series with their heavier players asserting their size advantage. In this Stanley Cup Final, tied at two games apiece after St. Louis’ 4-2 Game 4 win, the Blues appear to be winning the war of attrition.

Bruins defenseman Matt Grzelcyk has missed the past two games with a concussion after a high hit from Oskar Sundqvist, for which the Blues center was suspended one game, and Chara’s status for Game 5 is unclear after a shot clipped him in the face on Monday night. There’s also been some speculation that top center Patrice Bergeron is playing hurt; when Boston had a big lead late in Game 3, Bergeron didn’t play the final seven minutes.

“I did expect a physical series, but we bang hard, too,” Bruins coach Bruce Cassidy told reporters in St. Louis. “They’ve got a player (Thomas) out of the lineup – whether it’s a result of a hit from Krug or not, I don’t know. But we’re trying to take hits when we need to, give hits when they’re there.”

This clip is for hockey fans who want to victim blame

There was more than enough time for Sundqvist to avoid all contact#NHLBruins #StanleyCup #NHL #Concussion pic.twitter.com/1Hj4jh2ckc

St. Louis’ chippy play, especially when it concerns Boston goaltender Tuukka Rask, has cost the team in its two losses this series, racking up penalties; the Bruins’ potent power play is then able to take advantage. After Game 3, Blues coach Craig Berube griped over the number of whistles that went against his players (14) after St. Louis had been the least penalized team through the first three rounds of the postseason.

The Blues did a better job staying out of the box in Game 4 while still delivering 44 hits. The Bruins were close behind, credited with 41 checks, both teams trying to make their mark with the series now deadlocked.

“Ultimately to get to here, you have to have a big heart,” Armstrong said. “That’s what excites us about our group: we have a bunch of guys with big hearts.” 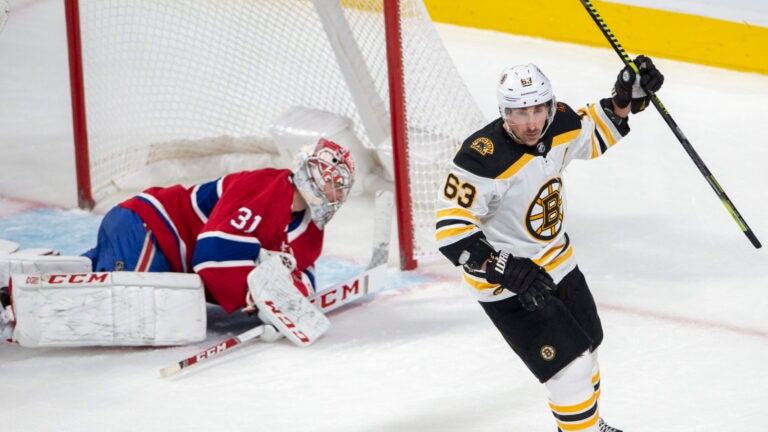