BOSTON – It was supposed to be another story for Boston sports lore – the beloved, veteran captain playing through pain to lead his team to victory. Zdeno Chara’s face was obscured by a gray beard and a partial shield to protect a jaw that was reportedly broken just three days earlier. After days of speculation over whether he’d play in Game 5 of these Stanley Cup finals, TD Garden roared as he took his place among the Bruins starters before puck drop.

But St. Louis Blues goaltender Jordan Binnington has made a habit of upending expectations this season, both for himself and his Blues. He was never supposed to be their starting goaltender, and after a miserable first half of the campaign, they weren’t supposed to be in the playoffs, much less playing in June. But on a night that seemed destined to belong to another, Binnington’s 38 saves delivered a 2-1 win for St. Louis and put them just one win away from the franchise’s first Stanley Cup.

The Blues have a 3-2 lead as the series shifts to St. Louis for Game 6 on Sunday.

Binnington had already made 31 saves when a trip on Bruins forward Noel Acciari by Blues center Tyler Bozak went uncalled. As Acciari was down, David Perron scored to extend St. Louis’ lead to two goals with 9:24 remaining. Boston fans made their displeasure with the no-call apparent, littering the ice with towels. Jake DeBrusk’s goal made it a 2-1 game less than three minutes later, adding even more weight to the officiating before Perron’s game-winner.

Tyler Bozak gets away with this trip on Noel Acciari… ?#StanleyCup pic.twitter.com/gSmUhpnN8r

The Blues are the bigger, more physical team, and while that hurt them with too many penalties earlier in this series, they’ve been able to push around the Bruins, especially the past two games.

A night that ended with boos from the stands started with thunderous applause. After a puck clipped him in the face during Game 4, it seemed unlikely that the 42-year-old Chara would play in Game 5. He wasn’t able to speak to reporters Thursday morning because of his injury, but asked through a team spokesman how he weighs the risk of further injury when deciding whether to play, Chara said: “You don’t think about that. You think about playing. You don’t go into a game thinking you might get hurt.”

“He’s an incredibly tough man,” Bruins forward Brad Marchand said before the game. “There’s a reason he’s still playing the game, he’s willing to do anything, put his body through anything to win. Especially this time of year, when you see your captain doing that and playing through injuries like that, it’s incredible to see. I have a lot of respect for him.”

Fans chanted Chara’s name twice by the end of the first period, and perhaps spurred on by their captain playing through injury and delivering the game’s first hit, the Bruins dominated in the first period with 17 shots to the Blues’ eight. St. Louis wasn’t able to establish its punishing forecheck, and Boston made a point to match St. Louis check for check. But the frame ultimately belonged to Binnington, who stopped everything that came his way to buy the Blues time to regroup at intermission.

St. Louis’ season unfolded in two parts, before Binnington’s first start on Jan. 7 and after it. Before he took over the Blues’ net, they were one of the worst teams in the league, and his emergence sparked an impressive second-half surge into the playoff picture and then into the finals. He has epitomized a team that’s become known for its resilience, steadily working his way up the organizational depth chart after he was initially passed over for another prospect. He allowed five goals on 19 shots in Game 3, pulled for a first time all season before a better showing in Game 4. On Thursday night, he had 25 saves after 40 minutes, four more than he had for the game on Monday.

St. Louis took advantage of Binnington’s play just 55 seconds into the second period, when Chara and Charlie McAvoy both chased Blues forward Zach Sanford behind the net. Sanford then dished the puck through McAvoy’s legs and to center Ryan O’Reilly in front. O’Reilly beat Bruins goaltender Tuukka Rask with a backhand, scoring his third goal in the past two games. Sanford hadn’t played since St. Louis’ first-round series, but an injury to Robert Thomas cleared a path for him back into the lineup for Game 3. He has assists in three straight games, promoted to O’Reilly’s line in the Blues’ top-six corps.

The second period begins with some great chances from the Blues, and then Zach Sanford and Ryan O’Reilly connected for this beauty. #stlblues #WeAllBleedBlue pic.twitter.com/dX5i9ebO65

As the Blues each filtered off the bench in celebration, they found Binnington – for a hug, a head pat or a stick pat. It all amounted to a thank you for his part in this season and this pivotal game. 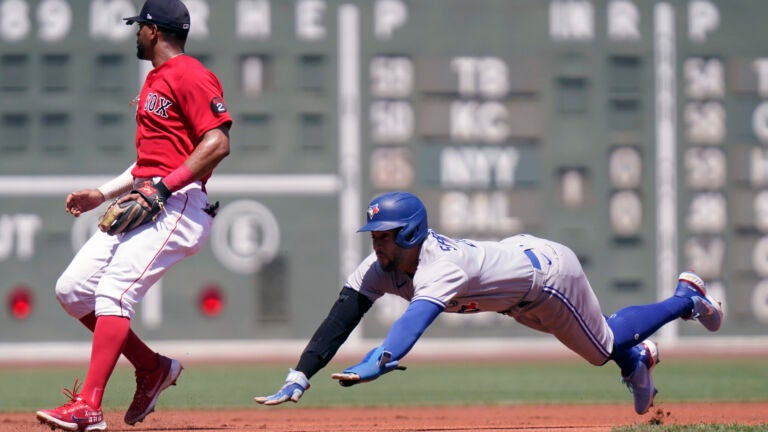