BOSTON – It wasn’t that Bruins defenseman Charlie McAvoy was exasperated by the many questions about his goaltender; it’s just that there was only one way to describe Tuukka Rask: “The best player on the ice,” he said.

After McAvoy was asked about Rask’s 12 saves when the St. Louis Blues were on the power play during Boston’s 5-1 win in Game 6 of the Stanley Cup Final, McAvoy repeated that he was “the best player on the ice.”

“He’s our best player,” McAvoy said again. “He has been all playoffs and all regular season.”

To McAvoy’s point, there’s a case to be made that Rask hasn’t just been the Bruins’ best player but the best player on the ice for either team this postseason with his .938 save percentage and 1.93 goals against average in 23 games. On Sunday night in St. Louis, he was the driving force behind Boston forcing a Game 7: He weathered an early St. Louis push and four penalty kills in the first two periods to maintain the Bruins’ 1-0 lead going into the third, when his teammates gave him some breathing room.

Rask will be the runaway choice to win the Conn Smythe Trophy as postseason MVP if Boston hoists the Stanley Cup at home Wednesday night, but he has been so dominant that he might win it even if the Bruins fall to the Blues – especially because St. Louis doesn’t have an obvious choice on its roster. The most recent Conn Smythe winner from a losing team was Anaheim goaltender Jean-Sebastien Giguere in 2003; it has only happened five times since the award was created in 1965.

“Unless he gives up eight goals in Game 7 and completely falls apart, to me he is the Conn Smythe winner with the way that he’s played,” said Brian Boucher, an NBC Sports analyst and former NHL goaltender.

“If you don’t get goaltending, you don’t win very often,” Bruins coach Bruce Cassidy said. “We’re no different than anybody else. We need good goaltending.”

With his 28-save performance in Game 6, @tuukkarask became the third active goaltender and 19th in NHL history with 50 or more postseason wins, per @PR_NHL. pic.twitter.com/r4w98kr010

To illustrate the evolution of the 32-year-old Finn, Cassidy suggested looking up a decade-old video from Rask’s time with Boston’s American Hockey League affiliate. “It’s worth Googling – it was excellent,” Cassidy said with a grin earlier in the series.

During a shootout in 2009, Rask disagreed with the official on two goals that ultimately counted, and his outburst included flinging his stick and then retrieving a milk crate to chuck that onto the ice, too. Rask hasn’t completely abandoned that fire – during a playoff game against Tampa Bay last year, he was so angry that a goal was allowed after his skate blade popped off that he threw the blade in the direction of the referee – but especially against a Blues team that has been aggressive in crashing the net, Rask’s poise has set an example for his teammates.

“I just think he’s been real calm for a while now, on and off the ice – really even-keeled,” Cassidy said after Game 1. “He got bumped a little bit a few times – yeah, he’s got upset with that – but he always gets it right back. That’s typically Tuukka.”

This entire season has been an exercise in resilience. After a poor start, Rask took a brief leave of absence from the team for a personal issue. “This was a time that, deep inside my heart, I felt like I needed to take time to be with my family and make things right, so I can be back here and focus on my job (as a goaltender),” Rask said at the time. He finished the year with his fewest starts (45) in six seasons and posted a .912 save percentage with a 2.48 goals against average. But Boucher said Rask hasn’t allowed more than two questionable goals all postseason.

#StanleyCup stays in his case thanks to Tuukka. Rask has been unconscious in elimination games this spring- .973 save percentage:

On a team with stars Brad Marchand, Patrice Bergeron and Zdeno Chara, Rask is occasionally a forgotten member of the Bruins’ core or the whipping boy for the fan base. He was on the 2011 team that won the Stanley Cup, but he was the backup to Tim Thomas and didn’t appear in the postseason. In the team’s 2013 run to the finals, Rask shined with a .940 save percentage and 1.88 goals against average, but in the final game against the Chicago Blackhawks, Rask allowed the tying and winning goals within 17 seconds during the final two minutes.

“It’s been a case of, ‘He’s good, but . . .’ ” Boucher said. “And I think the ‘but’ has been what most people have focused on here over the last several years. I think right now, what he’s done and showed me in the playoffs these last two months, the ‘but’ is erased for me. . . . He’s been by far and away the Bruins’ best player all playoffs long.” 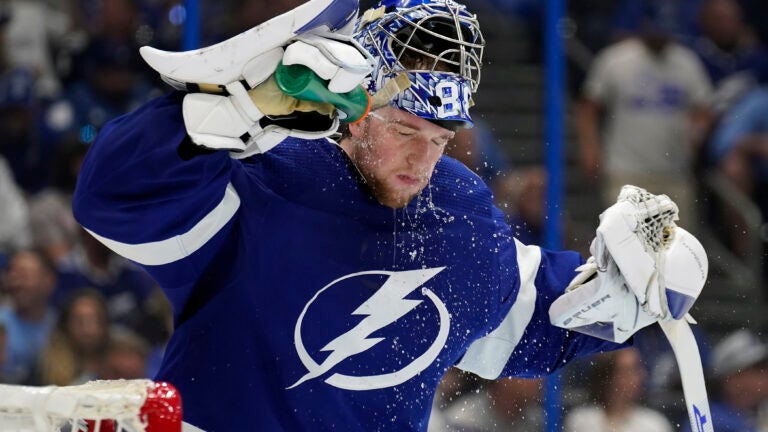