Following a quick turnaround from Game 7 of the Stanley Cup Final, Don Sweeney and Boston’s front office headed to the 2019 NHL Entry Draft in Vancouver looking to fill some holes in the lineup. The team’s brass put a heavy emphasis on their forward depth, selecting a center or winger with four of their five selections this weekend.

Here’s what you should know about the newest Bruins prospects.

The Bruins made their first splash of the draft by selecting Beecher from the United States National Team Development Program with the second-to-last pick of the first round.

But the Bruins may have reached for Beecher, especially with the likes of Bobby Brink and Shane Pinto still on the board. NHL.com ranked him as the 49th-best prospect.

But Sweeney saw something in the talented youngster, who tallied 43 points (15 goals, 28 assists) in 63 games on a stacked U.S. U-18 team that included the likes of top overall pick Jack Hughes. The Michigan-bound forward will certainly help bolster the depth of the center position following the Patrice Bergeron and David Krejci era.

Beecher has a rare combination of size, speed, skill, and handles that impressed Sweeney enough to take him 30th overall. He is still a few years away, but Bruins fans should be excited to see this kid in a middle-six role down the road.

Here’s a clip of Quinn Olson in the AJHL. Waits out the defenders and makes a nice pass to find his teammate open in the slot. pic.twitter.com/UjpxeWZF09

The Bruins kicked off their slate of Day Two selections by grabbing a left winger in the third round.

Olson, a University of Minnesota-Duluth commit for the 2020-21 season, fits the Bruins style. The Calgary native prides himself on impacting the game on both ends of the ice with his two-way play.

The 5-foot-10, 170-pound winger is a bit undersized compared to his peers. But Olson makes up for it with his deceptive speed and excellent ice vision. He used both to his advantage last season for the Okotoks Oilers of the AJHL as he totaled 66 points in just 54 games.

Olson’s playmaking ability stood out last season. But he’ll need to bulk up in order to progress through the collegiate and professional ranks.

The Bruins only defensive selection in the 2019 draft came by way of Russia in the fifth round.

The 18-year-old defenseman certainly isn’t the offensive stat stuffer as shown by his 15 points in 40 games for Yaroslav Loko of the MHL. Yet, his smooth skating ability could stand out whenever he begins his pro hockey development.

Shortly after, the Russians answered back. Roman Bychkov (#35 EU skater) pinched in, spun around and beat Joel Blomqvist through the legs to make it 1-1. I don't remember seeing him make moves like that at the #WJAC. #NHLDraft #U18 pic.twitter.com/rcHoHVjHnV

Bychkov, the 34th-ranked European skater in this year’s class, has experience on the international circuit as well, as he represented Russia in the 2019 U18 World Junior Championship this year. But he’ll have a tough time trying to climb the ranks among Bruins defensive prospects at the AHL and junior levels. He’s at least a few years away from making the jump to North American hockey.

Mantykivi’s high hockey IQ stood out among the Bruins brass this weekend And for someone who has taken bits and pieces of future NHL Hall of Famer Pavel Datsyuk’s game, that makes perfect sense.

The 5-foot-11 left winger played for SaiPa of the Finnish junior league for the past three seasons and represented Finland on the international stage on numerous occasions.

Bruins sixth round pick forward Matias Mantykivi has the right idea, when asked what Bruins should know about him: 'I don’t know, not so special, just a calm boy from Finland. Nothing else."

This past season Mantykivi captained SaiPa on his way to totaling 36 points in just 34 games. The talented Finn’s leadership and intelligence should mesh well with the Bruins’ culture both on and off the ice.

The Bruins closed out their weekend by selecting another two-way forward in Schmaltz.

It’s hard to find many Connor McDavid’s or Jack Eichel’s in the last round of the draft. But Round 7 provides plenty of value picks and the Bruins found one with Schmaltz.

The 18-year-old Wisconsin native, who heard about his selection at a graduation party, has good size at 6-foot-1, a good shot, and plays a solid 200-foot game.

Schmaltz’s well-rounded toolset should bode well when he heads to the University of North Dakota this fall. It’s unlikely that he will ever make a huge splash at the NHL level, but don’t count him out. 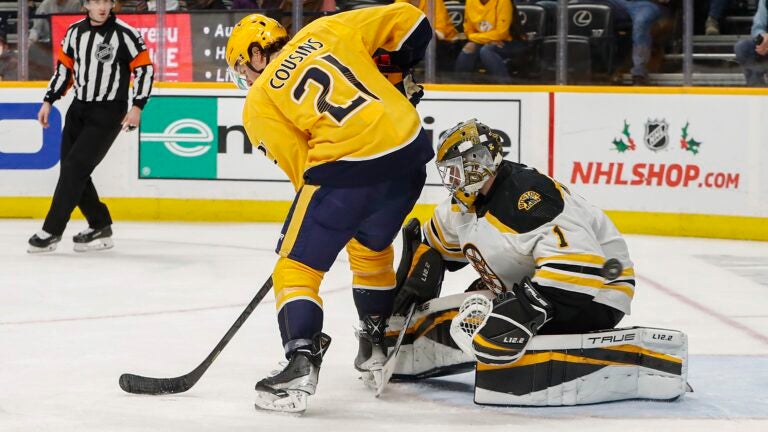