When Gemel Smith joined the Bruins last season, he was unsure of his NHL dreams, and himself.

In his first full season with the Dallas Stars, he had often been marked as a healthy scratch. Claimed off waivers by Boston, he moved to a new city, where he knew no one, and had no desire to change that.

In a video released by Canada’s TSN, Smith revealed that Patrice Bergeron reached out to check on him, a move that helped him realize how deep he was falling into depression.

“It’s a new environment for him, it’s going to take time, but at the same time, it seemed like something was up,” Bergeron said. “I just decided to reach out first to tell him we were happy to have him and he was more than welcome on the team.

“Even though I didn’t know him that well, he doesn’t have to suffer alone.”

Bergeron’s kindness came from a personal place – when he suffered a season-ending concussion in 2007, he began to exhibit the same symptoms. With “tremendous” support from his family, a sports psychologist, and teammate Martin LaPointe, Bergeron was able to recover.

Patrice Bergeron of the @NHLBruins knows what it’s like to be in a dark place.

When he saw former teammate Gemel Smith struggling, he stepped in to help. More from @MichaelFarber3 on tonight’s #LeafsOnTSN Pregame and on https://t.co/BQGeAnElqf.#BellLetsTalk Day is Wednesday. pic.twitter.com/k04IH6tUp4

“I was in a dark place for a while,” Bergeron told TSN’s Michael Farber. “I didn’t feel like myself. It was definitely tough times.”

When Smith was assigned to Providence after three games with the Bruins, he remembered what Bergeron had said. He began to see a sports psychologist regularly. In June, Smith signed a one-year, two-way contract with Tampa Bay. Last month, he earned an AHL Player of the Week nod.

“To know that [Bergeron] went through the same experience lets me know I’m no better than anyone else to not tell another person,” Smith told Farber.  “Talking about it] helped me a lot. It helped me to be aware of the situation and not ashamed of the situation. Patrice helped me stay with it, and here I am now.” 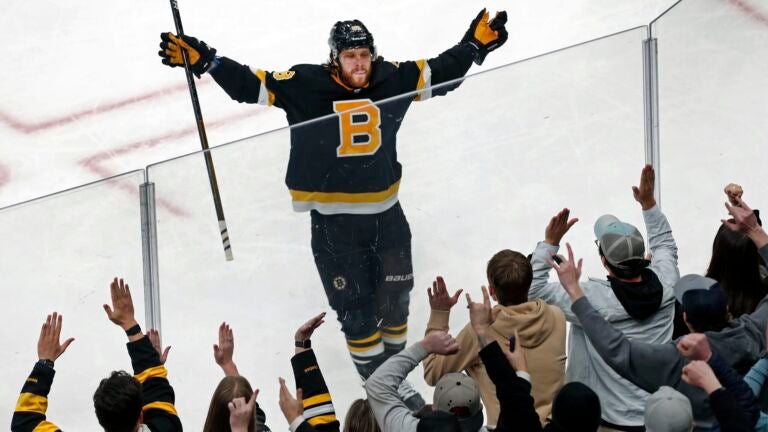 Bruins at the break: They have time on their side, and other hockey thoughts