The Boston Bruins kicked off their three-game Western Canadian swing in chilly Edmonton on Wednesday. In the end, they iced two pivotal points in dramatic fashion.

In a physical game full of penalties and quality scoring chances, David Pastrnak ended things quickly during the 3-on-3 overtime session. The Dynamic Czech playmaker, who took a tripping penalty with 2:30 left in regulation, was off to the races after receiving a feed from fellow countryman David Krejci en route to his 43rd goal of the season.

It wasn’t pretty at times against an injury-plagued Oilers bunch. The Bruins struggled in the middle 20 after holding the Connor McDavid-less Oilers to a mere two shots on net in first. But, once again, they dug deep and earned their 10th win in their last 11 games.

Here’s what we learned as the Bruins stay three points ahead of the red-hot Lightning atop the Atlantic Division.

Pastrnak secures the win with a Hart Trophy moment.

Every athlete needs a short-term mindset to remain a commodity at the professional level. A prime example of that philosophy came in the closing moments of Wednesday’s tilt.

Pastrnak took an untimely tripping penalty with 2:30 left in regulation. The Oilers scored earlier in the period on Sam Gagner’s tip-in to even things up at 1-1. That remained the only blemish from Boston’s shorthanded unit as they killed off their  fifth and final penalty of the evening on Pastrnak’s minor.

The sixth-year Bruin redeemed himself quickly. With extra pep in his step after Torey Krug’s defensive effort down the other end of the ice, Pastrnak took Krejci’s feed and delivered a beautiful backhanded tally past Oilers goalie Mike Smith to secure the win and pull even with Auston Matthews in the Rocket Richard race.

“Torey made a great defensive play and Krech [Krejci] won a puck battle and I was gone,” Pastrnak told reporters on the game-winner. “I figured I tried to go five-hole [against Smith], so [it was] a good win.”

“Anytime I see Pasta [Pastrnak] open — and he’s one of the best players in the league, and in the world — I just give him the puck and good things happen,” Krejci said to NESN’s Sophia Jurksztowicz.

Pastrnak became the first Bruin since Glen Murray in 2002-03 to reach the 40-goal mark. He’ll likely become the first Bruin to 50 since Cam Neely accomplished the feat — in 49 games — during the 1993-94 campaign.

The accolades should only grow. Pastrnak should at least receive Hart Trophy consideration. He proved that again with Wednesday’s clincher.

The power play had a rough night.

The Bruins grabbed a first-period lead on Patrice Bergeron’s 27th goal of the season. They had several chances to build on that with a whopping seven power-play attempts against an injury-plagued but talented Oilers bunch.

With seven of their regulars out of the lineup — notably McDavid, James Neal, and Oskar Klefbom — the Oilers have put an emphasis on the defensive end of late as they rotate players in and out of the lineup. Their attention to detail on the back end paid off, especially on the penalty kill where they went a perfect 7-for-7 on the night.

The Bruins and their second-ranked power play looked more stagnant than usual. Yes, they developed some quality looks and sustained a decent amount of zone time, but they rarely mucked things up in front of Smith for tips, rebounds and secondary scoring chances.

“They found a way to stay in the game and used their special teams and goaltending — a formula that we’ve used at times when they’ve been down in manpower,” Cassidy said to Edwards and Brickley.

The Bruins encountered a blip on Wednesday as they failed to extend their 1-0 lead with their handful of chances with the man advantage. But they stuck with it on a night where the two teams combined for 13 power-play opportunities.

Rask won the prestigious award given to the best goaltender in the league in 2014. He followed that up with a roller coaster ride full of twists and turns over the next five years.

Amidst scrutiny from Bruins fans over the years, Rask remained calm, cool and collective. He embraced his lesser workload upon Jaroslav Halak’s arrival. Together they’ve formed the best goaltending tandem in the National Hockey League.

Rask will likely end the season somewhere between 43 and 48 appearances in the Boston net. That may hinder votes toward his chances of a second Vezina Trophy. It shouldn’t.

The Finn earned a workmanlike 28 saves in Wednesday’s outing, including 17 in the second period. The Bruins D layered up in front of Rask as well, keeping leading point-getter Leon Draisitl and company away from prime scoring areas and forcing them to settle for scoring chances from the perimeter.

“We were battling hard. We kept them to the outside, but I think the second period is where they had their most dangerous chances,” Rask told the media. “But whatever chances were there the guys cleared them out.”

Rask has given the Bruins a chance to win more often than not between the pipes. Yet, this recent 12-game stretch might be his best in recent memory, posting a 9-1-1 mark with a remarkable 1.45 goals-against average and .951 save percentage.

With numbers like his recent run along with his league-leading 2.04 GAA and .932 SV%, Rask remains on pace to one of his more productive seasons yet. He may very well receive more hardware if he sustains that pace, but of course, there’s a bigger trophy he’d like to hoist at season’s end. 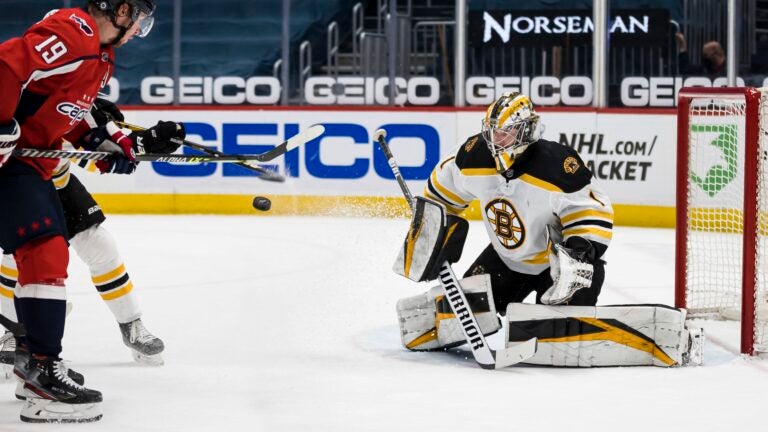