The Boston Bruins returned home from their four-game trip on Tuesday with a couple of new additions to the lineup. They began their brief two-game homestand with the same result as their final game in Western Canada.

The Bruins didn’t find that second gear against a desperate Calgary Flames bunch as they dropped their second straight game for the first time since mid-January. A pair of goals from Sean Monahan a minute and 22 seconds after Brad Marchand’s shorthanded tally and Mikael Backlund’s two lamplighters late in regulation — after Chris Wagner pulled the Bruins within one at 13:09 of the third — sparked Calgary to a 5-2 victory at TD Garden.

“We weren’t at our best for sure,” Marchand said after the loss. “It wasn’t our normal upbeat high energy game. It’s going to happen in an 82-game schedule — you’re not going to be perfect. Unfortunately, we didn’t get this one, but there are lots of [games] left.”

Here’s what we learned as the Bruins wasted an opportunity to extend their lead on the Lightning atop the NHL standings.

The Bruins’ energy level wasn’t where it needed to be.

Bruce Cassidy doesn’t shy away from critiquing his team when it’s needed. His honest comments can hit a nerve. But his straightforward approach — good or bad — also resonates throughout Boston’s locker room.

It didn’t take him long to make a blunt assessment when describing the team’s compete level on Tuesday.

“I thought some guys came to play and some guys didn’t. They didn’t break a sweat it looked like,” Cassidy said upon taking his first question at Tuesday’s press conference. “I’m sure the effort was there and they were trying…but at the end of the day, it wasn’t good enough.”

The fourth line of Par Lindholm, Sean Kuraly, and Chris Wagner came to play. Their hard-nosed pursuit of the puck in all three zones stood out on a rare off night throughout the lineup. Even with Boston’s shaky outing, the trio put the Bruins within striking distance after Wagner finally pounced on a loose puck in front of David Rittich with 6:51 left in regulation.

Chris Wagner buries his second goal in as many games.

The spurts of energy from the fourth line and Marchand’s shorthanded breakaway tally at 10:08 of the second didn’t translate into better results. Instead, the Bruins immediately fell back into a lull, especially during Monahan’s pair.

On Monahan’s first tally, David Pastrnak and Brandon Carlo both watched as Johnny Gaudreau set up along the boards to deliver a feed to Calgary’s alternate captain for the go-ahead goal.

Make it 2⃣0⃣ goals on the year for Mony. pic.twitter.com/WUtsoK4kgD

A mere 1:07 later, Matt Grzelcyk found himself in the box for roughing after coming to the aid of Charlie McAvoy following a late hit. The Bruins didn’t get the benefit of that call, and Monahan notched his second of the night just five seconds into Calgary’s third power-play attempt.

Wait … make it 2⃣1⃣ goals on the year for Mony. pic.twitter.com/NBt8TQ6QgX

Cassidy tried to switch his lines around looking for that spark. Aside from the late flurry to even things up, where Cassidy even tried an unusual four forwards and a defenseman tactic in a 5-on-5 situation, the Bruins rarely showcased any desperation before Backlund put the game out of reach with his late pair.

Nick Ritchie had a busy, but uneventful, debut.

The Bruins acquired Nick Ritchie from Anaheim to add a physical presence to the bottom six during Monday’s trade deadline.

At first glance, he didn’t waste any time throwing his weight around as he delivered a game-high seven hits in his Boston debut. Aside from that, there wasn’t anything to write home as he didn’t register a single shot attempt during his 14:17 of ice time.

“Obviously it’s my first game, so I’m getting used to a whole different team, different guys and different players,” Ritchie said. “It’s tricky, but hopefully it will come sooner than later.”

Ritchie, coming off a four-point outing with Anaheim against Vegas on Sunday, hardly settled into his new home after arriving in Boston late Monday. The former Ducks power forward bounced around the middle of the lineup, beginning the night with Charlie Coyle and Anders Bjork on the third line before Cassidy’s lineup switch. He ended his first game skating alongside David Krejci and Karson Kuhlman.

Of course, one game only provides a glimpse into the ramifications of any transaction. The Bruins sure hope they get more out of Ritchie and Ondrej Kase once he makes his debut in black and gold. They’ll need the former Ducks to step in and provide that timely secondary scoring in the long run.

The Bruins lost only their third game in regulation at TD Garden this season. Tuukka Rask didn’t start in those two home setbacks to the Avalanche on Dec. 7 and the Oilers on Jan. 4.

Rask carried a franchise-tying 20-game home point streak into Tuesday’s start on a night where the Bruins honored his fellow goaltending partner, Jaroslav Halak, for his 500th career NHL start. The Finn, like the rest of the team, didn’t have the sharpest of nights, but he made some timely stops including one on Gaudreau in the third to keep the Bruins within one.

For the most part, Rask couldn’t bail the Bruins out in their uninspiring effort. But he’s hit a rough stretch recently after allowing 10 goals in his last two appearances.

Interestingly enough, Rask hit a similar rough patch during this time frame in each of the last few years. Luckily enough, he has a dynamic goaltending partner in Halak waiting to spell him. A fresher and well-rested Rask benefited from that with one of his better career postseason performances last year, and Cassidy won’t be shy to use that again entering the final 18 games of the 2019-20 regular season. 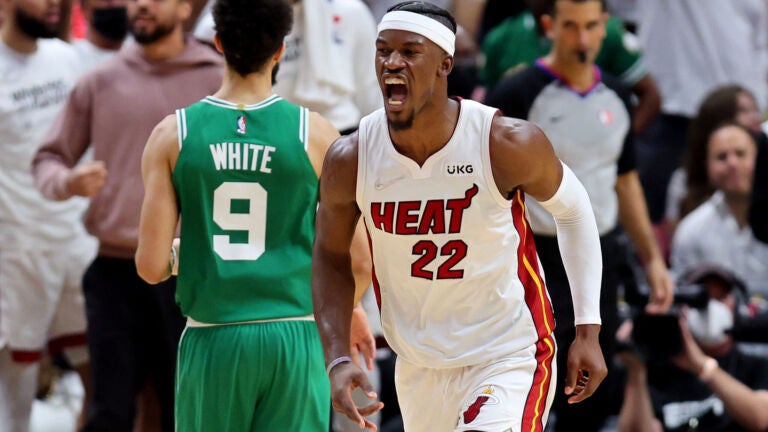