The Bruins lost 3-2 to the Hurricanes on Thursday in Game 2 of their Eastern Conference first-round series. A goal from former Boston defenseman Dougie Hamilton was the difference, tying the best-of-seven series at 1-1.

Game 3 is at noon on Saturday.

The Celtics lost their regular-season finale on Thursday against the Wizards, 96-90, and will start the playoffs on Monday at 6:30 p.m. against the 76ers.

And the Rays completed a four-game sweep of the Red Sox with a 17-8 win on Thursday. Boston begins a three-game series against the Yankees tonight in New York at 7:05 p.m.

Tuukka Rask’s postgame comments: Following the Bruins’ 3-2 loss to the Hurricanes in Game 2 on Thursday, Boston goalie Tuukka Rask admitted that the atmosphere in Toronto with no fans just wasn’t the same.

“To be honest with you, it doesn’t really feel like playoff hockey,” Rask said. “There’s no fans. It’s kind of like you’re playing an exhibition game. Obviously, there are some scrums after the whistle. I haven’t noticed that they would be targeting me or whatnot. Things happen, people falling on you and whatnot. But it’s definitely not a playoff atmosphere.”

Asked about his opinion in a follow-up question, Rask elaborated.

“You’re trying to play as hard as you can,” he said. “Obviously, you’re playing a best-of-seven series so there’s going to be some battles going on and whatnot. But when you play at your home rink, you play at an away rink, and there are fans cheering for you or against you, and that creates another buzz around the series.

“There’s none of that, so it just feels dull at times. There are moments that, OK, there are little scrums and whatnot. But then there might be five minutes, and it’s just coas-to-coast hockey and there is no atmosphere. It just feels like an exhibition game.”

Here are Tuukka Rask’s full comments on the atmosphere up in Toronto: pic.twitter.com/5qQU4BDA3N

Rask also said he wasn’t concerned about the results.

“I’m just trying to have fun and play the game,” he said. “I’m not stressing too much about results and whatnot. It’s August, and I haven’t played hockey in forever. Just go out there and have fun and see what happens.”

Brad Marchand had a different view than his goalie on the subject.

Trivia: In 1939, Ted Williams hit 31 home runs as a rookie, third most in the American League. What two players hit more than him?

Hint: One was his teammate, the other had hit 58 home runs the season before for the Detroit Tigers.

Mookie Betts hit three home runs for the Dodgers on Thursday in an 11-2 win over the Padres: He tied the MLB record for three-home run games in a career with six.

Mookie Betts is tied for the most 3-homer games (6) EVER.

Kendrick Perkins got called out for his own head-butt in 2015:

On this day: In 2016, Usain Bolt became the first person to ever win the Olympic 100-meter gold medal three times in a row.

Count them up 🥇🥇🥇@usainbolt becomes the first man in history to win three 100m Olympic titles in a row. #OlympicsWeekNBCSN

The @trailblazers needed every one of @Dame_Lillard‘s 52 4th-quarter points over their last three games to make the Western Conference Play-In! pic.twitter.com/En5mUxGA2j 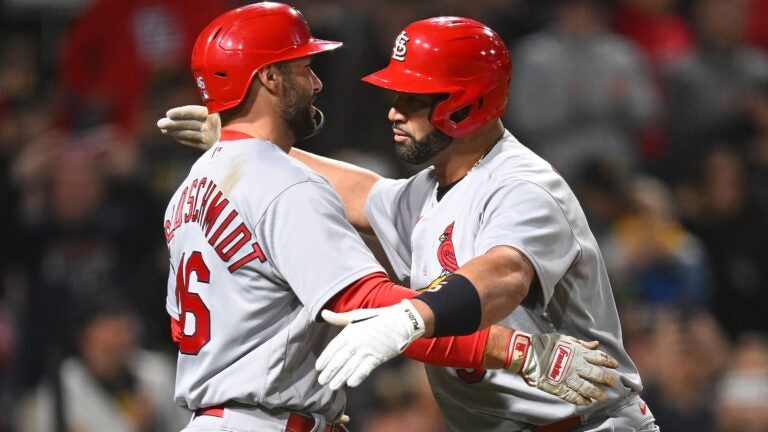