I’ve always found it telling in all the important ways when a productive player makes a habit of performing at an equal or even higher level in the postseason.

During the dozen championships the Patriots, Red Sox, Celtics, and Bruins have so graciously delivered Boston sports fans this century, a number of athletes have earned a well-deserved reputation for being at their best when the stakes are the highest and the competition is toughest.

Other examples: since becoming a starting wide receiver in 2013, the Patriots’ Julian Edelman has averaged 69.3 receiving yards per game during the regular season while an integral part of of the offense. He ups that to 97.6 yards per game over 14 postseason games in the same stretch.

In hockey, we’ll never forget Tim Thomas taking his play in net to a Drydenesque level during the Bruins’ Stanley Cup run in 2011, when he posted a 1.98 goals-against average and four shutouts en route to the Conn Smythe Trophy.

The fairly recent Celtics version? How about Rajon Rondo, who delivered such electrifying playoff performances such as a 44-point, 10-assist effort against the Heat (Game 2, 2012 Eastern Conference Finals) and a 28-point, 18-rebound, 13-assist masterpiece against the Cavaliers (Game 4, 2010 Eastern Conference semifinals).

Rondo could be an enigma – he seemed to revel in befuddling fans and especially the media, actually – but he came through so often in big spots that it became commonplace to refer to him as Playoff Rondo or National TV Rondo.

Which brings us to David Krejci. Or perhaps we should refer to the Bruins veteran centerman as his alter ego: Playoff Krejci, which is of course the hockey distant cousin of Playoff Rondo.

You call him that. I do too. I’m pretty sure Jack Edwards and Judd Sirott have done it. Even his teammates are in on it, with usual hockey nickname abbreviation.

“Obviously, we all love playoff Krejch,’’ said David Pastrnak after the Bruins’ series-clinching 2-1 win over the Hurricanes Wednesday. “He’s unbelievable.”

Pastrnak’s comment came after the Bruins’ clinching Game 5 win, during which Krejci scored a tying power-play goal, then assisted on Patrice Bergeron’s go-ahead score, both in the second period. Krejci finished the series with three goals, five assists, and a claim as the Bruins’ best player in the series.

On a roster with Pastrnak, Patrice Bergeron, and Brad Marchand among other nightly three-stars candidates, no one would claim Krejci is the Bruins’ best player during the regular season. But the playoffs are a different matter with him, and this is nothing new. He has a long history of playoff performance in his 14 seasons as a Bruin.

When the Bruins won their first Cup since 1972 during the magical run in June 2011, Thomas, Bergeron, and captain Zdeno Chara were perceived, rightfully, as the frontmen of the band and, along with Brad Marchand, the stars of the parade. But it was Krejci who led all players in the postseason with 12 goals (including four game-winners) and 23 points. He set up Nathan Horton’s winning goal in the pristine 1-0 victory over the Lightning in Game 7 of the Eastern Conference Finals – and that was after scoring a hat trick in Game 6.

Leading the playoffs in scoring once is never a fluke, but I suppose it could be the product of a well-timed hot stretch for a just decent player. But leading the playoffs in scoring twice? That’s when you join – and belong with – elite company. Krejci entered a club that includes Wayne Gretzky, Mario Lemieux, and Guy Lafleur in 2013 when he paced the postseason with 26 points (9 goals, 17 assists) during the Bruins’ run to the Cup Finals.

Krejci now ranks sixth in Bruins history in playoff goals (39), and only Ray Bourque has more assists (73) and points (112). If the 34-year-old continues to play at a high level in the postseason this year and perhaps a season or two beyond, there might be another number we need to remember: 46, his sweater number, could well end up in the Garden rafters.

This praise is not meant to double as a claim Krejci is always a phenomenon in the playoffs. In the Cup Finals last year against the Blues, he had no goals and two assists in the seven-game defeat. His most memorable play was a kick save while covering for an out-of-position Tuukka Rask in the Bruins’ Game 5 loss.

Before finding the net in Game 1 against the Hurricanes, he had been on a 14-game postseason goalless drought, dating to the Eastern Conference Finals last year against Carolina. Krejci is an elite passer, a savvy all-around player, and a reliable defender, but his grace and calm, slow-the-game pace can make him appear laconic when the points aren’t piling up. But after 14 seasons, most Bruins fans understand and appreciate him. And he has a coach who absolutely gets him.

“He’s a real competitor, good team guy, well liked in the room, quiet, I think a good hockey mind,” said coach Bruce Cassidy after Game 5. “You can always talk to him about the game and get good responses and good dialogue. [He’s a] guy that loves the game, he just doesn’t show it maybe like some other people would because he is kind of more of a composed guy that way, but certainly one of the more fierce competitors in terms of inner drive that I’ve been around here.”

Maybe Krejci drives you nuts sometimes when he seems bored or indifferent during a slog of a Tuesday night regular season game in one corner of Canada or another. (Or, say, during the round-robin portion of the Bubble Playoffs.)

But he’s one of those athletes with a history and habit of seizing the moment and being at his best in the postseason– like Ortiz, and Edelman, and yes, Playoff Rondo, among many others in these Boston sports good ol’ days.

Playoff Krejci is here again, and when the spotlight comes on, he makes you grateful that he’s on your side. 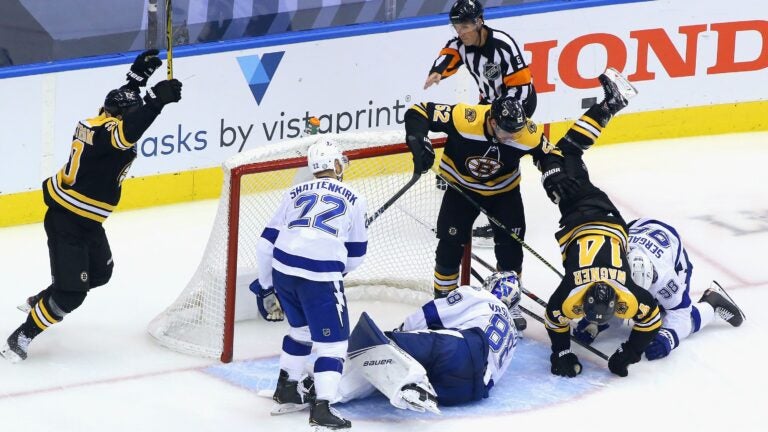 Here’s the full schedule for the Bruins-Lightning playoff series