One of the people that disagreed with Orr’s endorsement is Paul Scott, a lawyer from San Francisco. Scott took out an ad in Sunday’s edition of the New Hampshire Union Leader, the same paper that Orr placed in ad in on Friday to share his support for the president, to respond to Orr.

“I am a middle-aged white guy who plays beer league hockey, and I have a picture of you on my wall,” Scott wrote, with a picture of Orr’s famous goal from the 1970 Stanley Cup Final. “I read your endorsement of the President in the New Hampshire Union Leader, and I suspect that I am among those people you were trying to persuade with your endorsement. For that reason, and as my daughter plays hockey in New Hampshire, I felt compelled to respond.”

Scott didn’t question Orr’s patriotism, but he did question why Orr believed Trump would be the “kind of teammate” he would want.

“I coached my kids’ hockey teams for many years, and character was always the most important value we tried to teach the kids,” Scott wrote. “Blatant lying or cheating, blaming others for your own mistakes, or abusing others based on their race or sex or otherwise was simply unacceptable behavior. These were not just matters of personality. They were matters of character.”

Scott also took issue with Orr saying that you may not like what Trump tweets or says, his policies should get him re-elected.

“The President’s policy on many issues – such as unprecedented deficit spending, stoking racial division, concealing the threat posed by COVID-19, and trying to pretend climate change is not real – all ultimately boil down to selfish shortsighted behavior that will seriously be detrimental to not just us but also to our children and future generations of Americans,” Scott wrote.

Scott concluded his ad by saying while he won’t take down his autographed picture of Orr, he is not swayed by his endorsement and will vote for Joe Biden.

“I would far rather have him as a teammate,” Scott wrote of Biden. 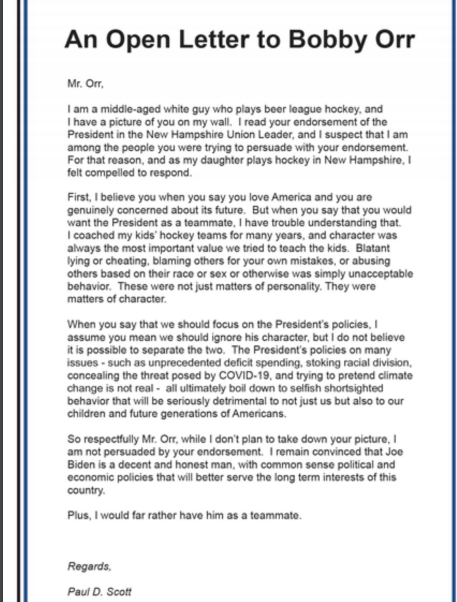 Paul Scott wrote an open letter to Bobby Orr over his endorsement of Donald Trump. 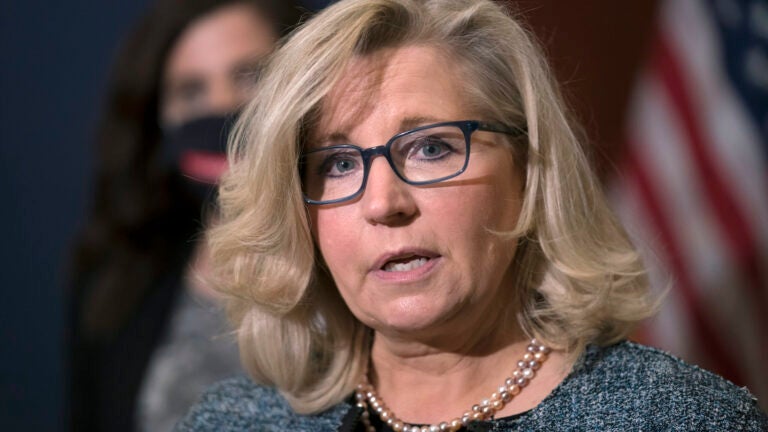