Johnny Boychuk’s hockey career is over.

The ex-Bruins defenseman, who has played for the New York Islanders for the past six seasons, was forced to retire from hockey due to an eye injury he suffered during the 2019-20 season, the Islanders announced Wednesday.

“After numerous and extensive medical exams, New York Islanders defenseman Johnny Boychuk’s career has come to an end, due to an eye injury suffered during the 2019-20 regular season,” the team said in a statement. “The most recent injury was the second to the same eye.”

Boychuk, 36, choked up a few times when speaking to reporters over Zoom on Wednesday to share the news of his retirement.

“It wasn’t really a decision,” Boychuk said. “It was a life choice.”

Johnny Boychuk on if it was his decision or the doctor’s decision to not play again:

“It wasn’t really a decision. It was a life choice I guess” pic.twitter.com/75LgdpfOLs

The injury that ultimately ended Boychuk’s career came when Canadiens forward Artturi Lehkonen accidentally kicked him in the eye, forcing Boychuk to receive 90 stitches on his eyelid. Boychuk did play in the playoffs in August, but after he was concussed in the team’s opening game of the qualifying round, he realized how much his vision had been impaired.

“I didn’t see him coming and I realized I should have been able to, at least a little bit,” Boychuk said of the hit from Panthers’ Mike Matheson that concussed him. “I realized something was off then. And going back in (against the Lightning a month later), I noticed it for sure. Once we lost and I was out of the bubble, I definitely noticed it was worse than I thought.”

Boychuk said that he later learned from eye tests that he had optic nerve damage and a severe lack of peripheral vision.

The Bruins showed appreciation for Boychuk’s career on Wednesday.

“The Bruins want to wish Johnny Boychuk all the best in his retirement. Thank you for helping to bring the Cup back to Boston,” the team wrote in a tweet with a picture of Boychuk hoisting the Stanley Cup.

The Bruins want to wish Johnny Boychuk all the best in his retirement. Thank you for helping to bring the Cup back to Boston. @joboych pic.twitter.com/xOp6tH3Xxn

A former Bruins teammate of Boychuk’s weighed in as well.

“Congrats to my brother from another mother on a successful career,” Milan Lucic wrote in a tweet. “Sucks it had to end this way but was pleasure being your teammate and best friend for 5 year in Boston. Love you bro #2011 champs”

Congrats to my brother from another mother on a successful career. Sucks it had to end this way but was pleasure being your teammate and best friend for 5 year in boston. Love you bro #2011champs @joboych pic.twitter.com/vimiO8yYln 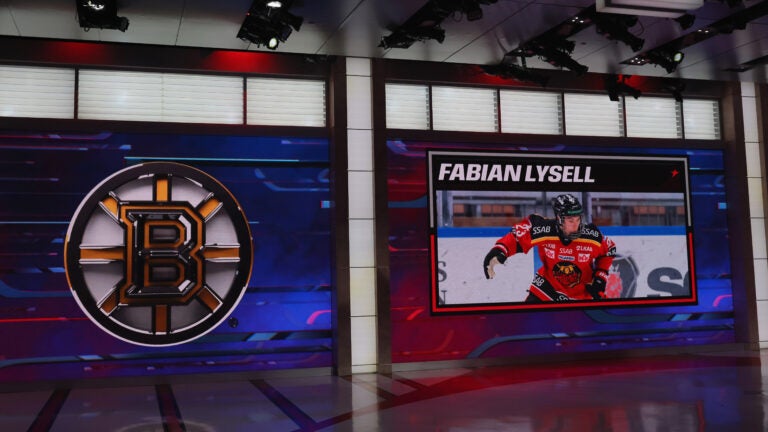 Getting to know Fabian Lysell and the 2021 Bruins draft class