A day after Zdeno Chara elected to move on from the Bruins, general manager Don Sweeney offered a glimpse into how that decision was made and indicated that it was ultimately Chara’s choice.

He said the team offered Chara a contract months ago and looped him in on the organization’s internal plans at that point. Sweeney acknowledged to Chara that the Bruins would try to integrate younger players into the system to see what they could do. Chara would still be part of the equation, Sweeney told him, but perhaps not quite as much as he has been in the past.

“We described it as an integral role and just didn’t make a categorical promise that he would have the exact same role he had certainly in his historic career with the Boston Bruins,” Sweeney told reporters Thursday morning.

When the Bruins told Chara where they were at, Sweeney said Chara indicated that he wanted time to continue to wrap his mind around that role and weigh his options. Sweeney said he spoke to Chara and his agent, Matt Keator, on Wednesday and learned that Chara had opted not to return.

The longtime captain and defenseman signed a one-year, $795,000 deal with the Washington Capitals, and just like that, his illustrious career with the Bruins had come to a screeching halt.

“Recently, The Boston Bruins have informed me that they plan to move forward with their many younger and talented players and I respect their decision. Unfortunately, my time as the proud captain of the Boston Bruins has come to an end,” Chara wrote on Instagram.

Sweeney said the plan is to fill Chara’s minutes “by committee” and that the team will pause for now but eventually name a new captain that will be an “obvious choice.” The expectation is that Patrice Bergeron will assume the role, but Sweeney didn’t explicitly say so Thursday.

He pointed out that a 6-foot-9, 250-pound defenseman is “fairly unique” in hockey and praised Chara for his contributions over the years. Sweeney called him a “physical force” and said other players will have to step up to fill that role.

The general manager noted that Charlie McAvoy and Matt Grzelcyk will likely see more time on the power play.

Even though he’s encouraged by the team’s chances this season and beyond, Sweeney said seeing Chara depart certainly wasn’t easy.

“I’m very sad,” Sweeney said. “It’s an unrewarding aspect of the job to see a player like that choose to leave.”

Don Sweeney gives his explanation as to why Chara and the Bruins both decided to move on. @WATDSSMN pic.twitter.com/2i5JLmULsK

Outside of Chara, Sweeney also noted that Brad Marchand is progressing well and has been on the ice essentially every day. He said David Pastrnak likely won’t start in the first few games and is on a bit of longer timeline.

The Bruins are set to open the season Thursday, Jan. 14, on the road against the New Jersey Devils. 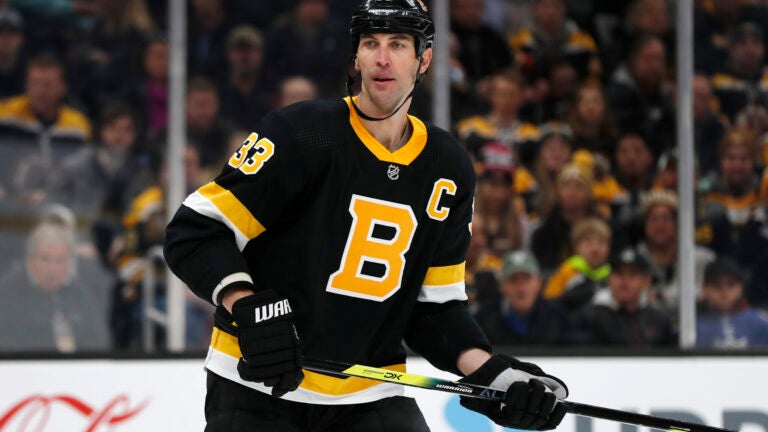 What Zdeno Chara's departure means for the Bruins