The Boston Bruins will look a little different this year, and they will look particularly different as they open their season short-handed against the New Jersey Devils on Thursday.

In addition to the high-profile departures of Zdeno Chara and Torey Krug, Boston starts its season without its top goal scorer last year: David Pastrnak. The 24-year-old winger underwent a right hip arthroscopy and labral repair on Sept. 16 and is expected back in February.

Until then, the Bruins will try to get by with a combination of new faces and old friends. Here’s what to watch for as the puck drops on a new season at 7 p.m. on NESN.

Will Brad Marchand play and how does he look?

The goal for the Bruins has been to get their star winger back on the ice for Thursday’s game after he underwent a procedure to fix a sports hernia during the offseason. Coach Bruce Cassidy offered a positive update on Wednesday, telling reporters via Zoom he “fully expects” Marchand to be available, even though he is a game-time decision.

“Obviously we’re being cautious with Brad in his return to play,” Bruins GM Don Sweeney said on Tuesday. “He’s got a goal for him to be there Opening Night, and we still expect that to happen, but we have to react to how he’s feeling.”

Marchand’s health could be a major storyline for the Bruins in the early going. Opening the season without both of their top goal scorers from last year would be difficult.

Craig Smith — who left Nashville to sign with the Bruins as a free agent this offseason — could fill a role on the wing with Pastrnak out. A talented even-strength goal scorer (31 of his 39 goals in the last two seasons came in even-strength situations), Smith scored 25, 21, and 18 goals in his last three seasons.

Smith is excited to be part of a Bruins team with a chance to compete.

“Obviously coming in, there’s a lot to take in, but it’s all excitement,” Smith told the Bruins’ social media team. “Coming in here, meeting a new group, it’s been a learning experience, but this room has been great. It’s been incredible. These guys are so tight. You can see why these guys won a lot of games together. So I’m really excited to be here.”

Can the left-side defense weather all of the offseason losses?

Much was justifiably made of Chara’s departure, but Boston also lost Torey Krug to the St. Louis Blues.

Two players in particular will be asked to step up: Charlie McAvoy and Matt Grzelcyk. While McAvoy will lead the defense, Grzelcyk in particular could see a major increase in his role. When Krug was out last season, Grzelcyk filled in capably in his place, particularly in power-play situations. Can he continue to do so in a primary role?

The left side will be the biggest question mark without Chara and Krug. Former first-round pick Jakub Zboril might be called on to fill in, as well as Jeremy Lauzon, John Moore and others.

The Bruins’ star goalie said he left the team in the bubble last year to help deal with a medical emergency at home. Now he’s back, and both he and the coaching staff say the team seems happy he’s around, despite his absence in the bubble.

“It was a tough decision to leave, but then again, it wasn’t because I knew it was more important for me to be home at that time,” Rask said earlier this week. “So that was easy to live with. …

“Your brain is kind of spinning at that point, knowing, yeah, you are in the right place at home, but knowing you should be there, stopping pucks. It was tough for a few weeks, but it helped, you know, I was talking to Jaro [Halak] a lot, and to a lot of guys who gave their support. They knew what was going on, so there’s that.”

The Bruins get a first look at a new rival.

The Devils are now in the Bruins’ division, which means Thursday’s game is a preview of eight regular-season contests between the two squads. New Jersey finished 28-29-12 last season and is in rebuilding mode, but the Devils have strong goaltenders and a promising young front line.

What will look different due to COVID-19?

And finally, the universal question with which every league has to wrestle.

Some highlights for the NHL:

Additional changes have been made to the playoff format, but the league can cross that bridge if and when the moment arrives. 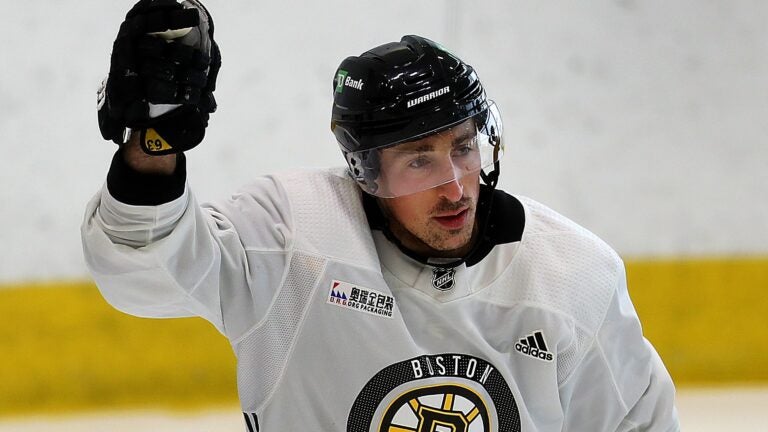 Here’s the latest version of the 2021 Bruins schedule