The Boston Bruins ushered in a new era in Thursday’s season-opener against the New Jersey Devils.

The initial results showcased positives, potential and room for improvement. The Bruins dominated play for a good chunk of the first two periods only to see their 1-0 and 2-1 leads evaporate in the third period on a breakaway goal by Miles Wood and Ty Smith’s pinball tally.

Amidst the heavy legs after several months off, the Bruins earned their first win of the season behind Brad Marchand’s first period goal and shootout winner, a third period power play tally by Nick Ritchie, a stellar effort from Tuukka Rask in the 3-on-3 overtime, and an inspirational effort from a returning Kevan Miller.

“We let a lead get away from us in the third period, and that’s not a road we want to go down,” Bruins head coach Bruce Cassidy said. “It was a good teaching moment for us, obviously, and to still be able to get the two points is nice. I thought our start was excellent…but we just got away from it a bit in the third.”

Here’s what we learned from Boston’s 3-2 triumph in Newark.

Rask remained active in more ways than one.

In his first game since leaving the Toronto postseason bubble to attend to his daughter, Rask didn’t see a whole lot of shots through the first two periods. Yet, he remained active from the opening whistle to the final moments of the shootout.

Rask had his head on a swivel at times as an aggressive Devils bunch — particularly Wood — ran him over on a handful of occasions. The winningest goalie in franchise history got back on his feet each time.

The Bruins needed Rask, particularly in the third period and overtime. He made 22 saves in all, half of those coming in the final 25 minutes.

Rask saw several breakaways in those final moments. He was up to the task each time, stopping the likes of Kyle Palmeri and Pavel Zacha from point-blank range, to keep Boston’s young ‘D’ afloat.

“His game was excellent,” Cassidy said of Rask. “I thought he was in midseason form. He didn’t look like he was fighting [the puck] or not tracking it.”

The Bruins peppered MacKenzie Blackwood with 37 shots on goal. They needed Rask in crunch time. Now they need to make sure Rask doesn’t get crunched on a nightly basis.

Rask, for his part, hopes to avoid further collisions with the Devils. After all, the two teams will face off seven more times during this re-aligned season.

“I hope not,” Rask said on the thought of the Devils taking liberties at him. “We face them seven more times this season.

The veteran forward admitted he felt like he was playing at 80 percent over the past few years before he went for off-season surgery to repair a sports hernia. It’s pretty remarkable to think about that given Marchand’s stellar production during that time.

Now think of his potential production with his health at 100 percent. Perhaps Thursday provided a good indication of that.

Marchand kicked off the new season tipping in a feed from David Krejci on the power play to give the Bruins the 1-0 lead.

Brad Marchand opens the scoring on the power play.

What a play by David Krejci. pic.twitter.com/IgMnipLjY8

He ended it in the shootout, going five-hole on Blackwood, to secure Boston’s first shootout win since Feb. 19, 2019.

Brad Marchand wins it for Boston in the shootout. pic.twitter.com/fodnpmovwK

Miller waited a long time to don the Spoked B in a regular-season tilt. His effort Thursday was worth the wait.

The veteran blue-liner found himself in the starting lineup for his first game since April 4, 2019. Miller was engaged from the get-go, providing the Bruins with some of his trademark hits. He looked more like a player suiting up for his 325th career game than someone who hasn’t skated in a meaningful contest for roughly 21 months.

Kevan Miller is back. pic.twitter.com/8N0Nlb0dLz

Miller’s feel-good story resonated throughout the organization. Every Bruin from upper management to the coaching staff and the locker room heaped praise in Miller’s direction since training camp.

The praise didn’t end on Thursday. Marchand, a hunting buddy and fellow business partner of March and Mill Co., shared the stage with Miller in the postgame Zoom call with the media.

“It was awesome to see Millsy back. We all know how hard of a road he’s had the past year and a half,” Marchand said.

“With how hard he pushed to get back and go what he had to go through, his resiliency…I think everyone was looking forward to tonight was watching him back on the ice. From the second he stepped on the ice at camp, you could see that fire in his eye. It’s fun to watch him out there. He’s a big part of this team on and off the ice. It was great. We wanted to win one for him tonight.”

Marchand had another sentence or two of praise. Miller then chimed in with a response of “alright — uncle…uncle…uncle.”

Then it was Miller’s turn to say a few words on his emotional return.

“It’s been a long road for sure,” Miller said, “and I’m just excited to be back out there.” 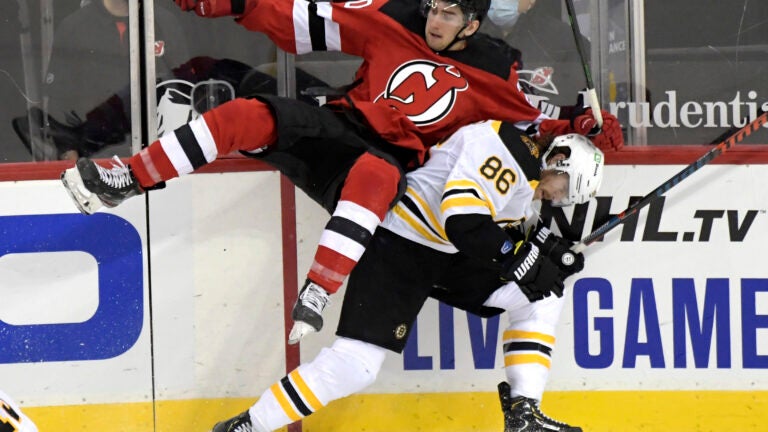