Brad Marchand can probably be forgiven for having a lot to say about Kevan Miller by everyone except, it seems, Kevan Miller.

In the aftermath of the Boston Bruins’ 3-2 season-opening victory over the New Jersey Devils, Marchand had high praise for the 33-year-old defenseman, whose career was in doubt a little over a year ago. Thursday was Miller’s first NHL game since he broke his kneecap for a second time in just 35 days in 2019.

So after Miller worked his way back to the NHL and administered a few trademark hits in the Bruins’ victory, Marchand started talking about Miller and didn’t stop.

“It was awesome to see Millsy back,” Marchand said. “We all know how hard of a road he’s had the last year and a half. A lot of guys would have quit and would have just hung them up. With how hard he pushed, to get back and what he had to go through and his resiliency, I think that’s what everyone was so looking forward to tonight — watching him back on the ice. I mean, from the second he stepped on the ice in camp, you could see that fire in his eye. It’s fun to watch him out there. He’s such a big part of our team on and off the ice, and it was great. We wanted to win for him tonight.”

Marchand stuttered for a second and sounded like he might stop, but he found his thoughts again.

“It’s crazy how he does it,” he continued. “He doesn’t just come and be another part of the game. He was unreal out there, and he was his old self again so it was fun to watch.”

Marchand would have continued, but finally Miller — who appeared to be stifling a smile — broke in.

For his part, Miller — who spent nearly 17 minutes on the ice — was happy to talk about other players. Asked about Charlie McAvoy, who will step into an important role for the Bruins’ defense this season, Miller said McAvoy “played great” and dug out a memory of McAvoy’s first game in Ottawa to show his teammate’s progress over the years.

“He’s filled that role awesome, and we’re going to lean on him heavily, and I know he can handle it for sure,” Miller said.

Setting aside the irony of Miller praising another player’s journey to the NHL after shouting down someone praising his own, he couldn’t stop either his coach Bruce Cassidy or goalie Tuukka Rask from praising him in separate media sessions.

“I think the most important thing we wanted was to get him through healthy. We were almost not even concerned about how the game went for him. Obviously, we wanted him to play again well, but we wanted him to survive a live action and be comfortable and trust his body to perform, and we got both tonight. So good for Kevan. I’m very happy for him.”

“I think he looked really comfortable out there,” Rask said. “He’s been working extremely hard the past couple of years to come back. We’re so happy for him.” 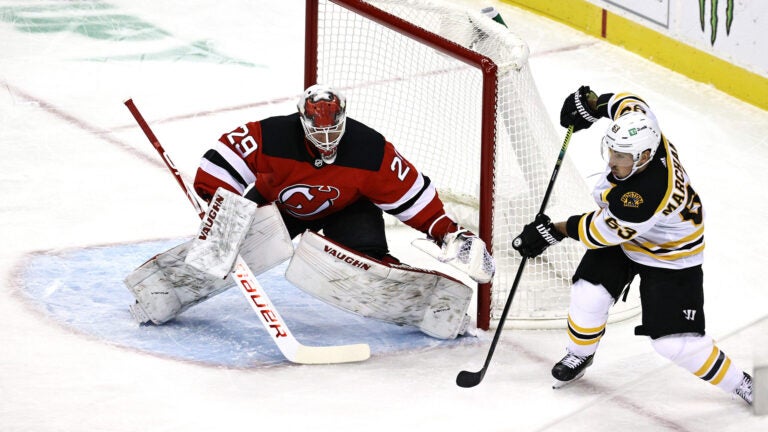