Jack Studnicka was impressively calm in his postgame comments for a 21-year-old who scored his first career goal.

Following the Boston Bruins’ thrilling 5-4 victory over the Philadelphia Flyers on Thursday, Studnicka was queried about the momentous night in his career when he simultaneously broke into the scoring column and gave the Bruins their first 5v5 goal of the season.

“Yeah, it’s obviously a very exciting night for myself,” Studnicka said somewhat flatly. “Great to get the win, so that adds on to that. The play was a good play by [Nick Ritchie] at the blue line, and then a really skilled play by [David Krejci] to find me there. Just put it in the net.”

Studnicka’s goal opened the scoring in the third period after the Bruins entered trailing 2-0. Just 57 seconds in, Studnicka took a shot, and the puck rebounded off Flyers goalie Carter Hart. Studnicka closed in and tipped it home.

For that brief moment, Studnicka celebrated.

tfw when you score your first career NHL goal pic.twitter.com/m0C1E52ycW

Then he was back to business — Boston had a game to win, and things only got wilder. The Bruins scored again, then traded two more goals apiece with the Flyers, triggering overtime. After five scoreless minutes (highlighted by Tuukka Rask’s brilliance), the game went to a shootout, where Jake DeBrusk found the back of the net for the game-winner, clinched by Rask.

In addition to the memorable game, Studnicka’s first career goal came in a strange setting — an empty TD Garden, where the only people who could celebrate his achievement were his teammates.

“Special night regardless of the situation obviously,” Studnicka said. “It’s just the world we live in right now. I’m still going to enjoy it obviously. …

“I’ve seen this team come back in the third period so many times, so to be a part of it tonight was special.”

Studnicka doesn’t plan to keep the puck, however.

“I’ll probably give it to some special to me, whether that’s my dad or my grandpa, someone like that,” he said. 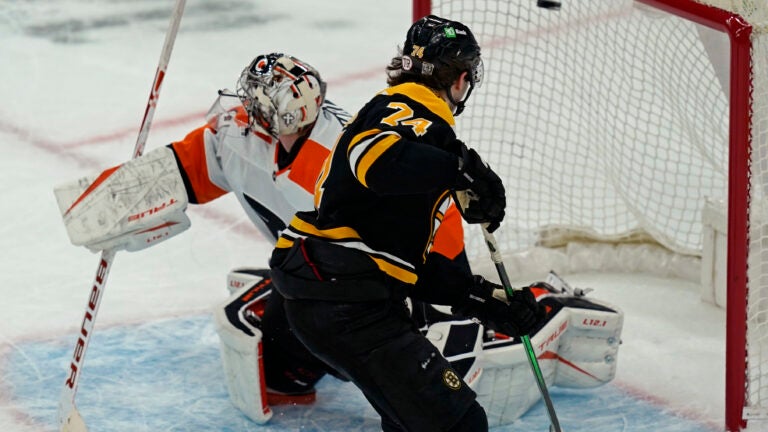