The Boston Bruins appeared to be heading toward another frustrating offensive night through two periods against the Philadelphia Flyers. Not only did they find themselves behind 2-0, but they entered the third period without a 5-on-5 goal through 220 minutes of play.

Bruce Cassidy told his team they were too easy to play against offensively during the second intermission. With a chip on their shoulders, the Bruins wasted little time lighting the lamp.

“We were pressing there during the first three games on the road,” Nick Ritchie said postgame. “It seemed like after Studs [Studnicka] got that one, it was a big goal for us…and just a couple of shifts later, it was a spin around shot by Coyle and he found the back of the net.”

The Bruins and Flyers traded punches through the remaining 22:57 of play. Each team secured a lead in the final 17:57 of regulation.

The Bruins responded to Travis Sanheim’s go-ahead tip-in at 7:13 with a Ritchie power play marker and Brandon Carlo blast 1:56 apart for their first lead of the night at 4-3. James van Riemsdyk answered with his second of the night just 50 seconds later, ultimately sending the game to overtime.

The two teams exchanged chances with Tuukka Rask making a pair of highlight reel stops to force a shootout. Jake DeBrusk scored the lone tally of the glorified skills competition — with a nifty flip shot — to secure Boston’s second win of the season.

What a move from Jake DeBrusk: pic.twitter.com/PQb0GgFqap

“It shows the resilience of this team,” Carlo said.

“I don’t see that stopping anytime soon,” Ritchie said. “So hopefully we can keep that going.

Here’s what we learned from Boston’s thrilling home-opening 5-4 win in front of an empty TD Garden.

Ritchie is proving his doubters wrong so far.

GM Don Sweeney acquired Ritchie from Anaheim at last year’s trade deadline hoping to add a good, physical net-front presence in the middle of Boston’s lineup. Ritchie, a 2014 first round selection — taken 15 picks ahead of David Pastrnak — couldn’t find a rhythm in the Toronto bubble. He found himself as a healthy scratch for three games against the Hurricanes and for the final two tilts with the Lightning.

Ritchie looks different this time. He’s been engaged in puck pursuit and in net front battles in each of the four contests. The sixth-year power forward finds himself on the second line with Studnicka and David Krejci and on the top power play unit.

On Thursday, Ritchie put his work ethic to good use again with a timely power play goal to tie things up for his second tally of the season. He ended his night with an assist to go along with a pair of hits and shots on net in 15:22 of ice time.

Nick Ritchie ties it up on the power play.

Ritchie, who would have three goals on the year if not for a disallowed tally in New Jersey last Saturday, received plenty of critiques following a disappointing first impression. Cassidy admittingly told Ritchie that he needed to earn his ice time during training camp.

Nothing was given to Ritchie. He took Cassidy’s message to heart. So far, he’s been an asset to his club.

“Ritchie has been kind of finding his place here,” Cassidy said. “He’s been finding a rhythm every game through training camp, so hopefully that continues for him.

Rask bounced back in OT.

Boston’s young D had their roughest night of the season. The Bruins only allowed 26 shots on net, including four in the opening 20 minutes. At times, however, they left Rask hung out to dry, providing a handful of quality scoring opportunities for the likes of Claude Giroux, van Riemsdyk and an offensively talented Philly bunch.

Rask himself didn’t allow the smoothest of goals on Sanheim’s third period tip-in. But Rask made up for that blemish in overtime, stopping all five shots he faced. Notably, he robbed Jakub Voracek and Kevin Hayes on the doorstep to keep Boston’s hopes intact.

Another crazy stop for Tuukka Rask in OT – this time on Kevin Hayes. pic.twitter.com/oMqQvJK5nN

The Finn secured the shootout win stopping all three shots he faced. He’s now a perfect 6-for-6 in the two shootout wins this season. Not bad for a team that went 0-7 in shootouts a year ago.

“Tuukka was again outstanding in overtime…and in shootouts. He’s been lights out in those,” Cassidy said of Boston’s all-time winningest netminder. “We couldn’t win one [shootout] last year to save our lives, and now we’re 2-0 in them, so go figure.

Studnicka is learning the ins and outs of NHL life.

His latest puck is undoubtedly his most prized one yet.

Studnicka picked a good time for it as well. The 2017 second-rounder banked home a rebound for that elusive 5-on-5 goal to kick start the Bruins’ comeback.

“This one probably takes the cake,” Studnicka said of his first goal puck.

The Bruins’ even-strength scoring slump is over. pic.twitter.com/skBCzlastp

He has a mere five regular season games under his belt. But Studnicka gained valuable postseason experience during the Toronto bubble.

Studnicka never imagined he’d score his first NHL goal with no fans in attendance. Nor did he envision his first goal would break a 220:57 dry spell at even-strength.

Regardless of circumstances, Studnicka enjoyed the moment.

“Special night regardless of the situation we live in right now,” Studnicka said. “I’ve seen this team come back in the third period over the past couple of years so many times. So, to be a part of that tonight, that was special.”

On Thursday, it was Studnicka’s turn to stand center stage in Boston’s latest come-from-behind victory. 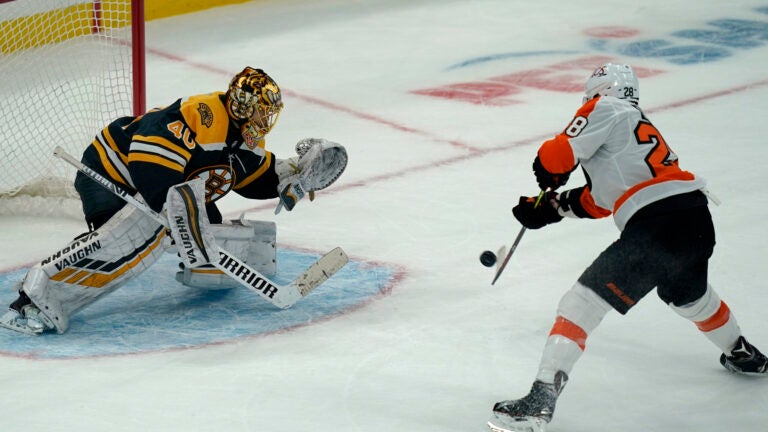 ‘I would not want to go against Tuukka’: Tuukka Rask saves Bruins in OT vs. Flyers