Jack Studnicka, who scored the first goal of his career in the Boston Bruins’ 5-4 victory over the Philadelphia Flyers on Thursday, was the center of attention for the Bruins postgame.

The star of the game, however, was goalie Tuukka Rask. While the Bruins finally found four goals in the third after two scoreless periods, the Flyers came charging back and sent the game to OT.  But Rask shut down several great looks in overtime and held Philadelphia scoreless in the shootout, which — combined with Jake DeBrusk’s game-winning shootout goal — lifted the Bruins to a win.

“I actually said on the bench to [Chris Wagner] how I would not want to go against [Rask], just because of how calm he is in there,” Studnicka said. “Definitely kept us in the game there, so that was awesome.”

Some of the plays Rask made during the overtime period, however, could hardly be classified as “calm.” He was asked about two saves in particular after the game. The first was an opportunity for Jakub Voracek directly in front of the goal. The puck found its way to the top of the crease, where Voracek poked it toward the net. Somehow, Rask followed the play all the way to the end and knocked the puck up in the air with his glove.

“I saw Voracek was all by himself in front of the net, and the D-man or whoever kind of shot a floater in there,” Rask said. “He made a good play, just trying to tip in my five hole on the rebound as I was laying there, so I just tried to get extended as much as possible and I think I had it in my glove there.”

The second save may have been even more spectacular. Speeding up the right side, Voracek found Kevin Hayes on the left, who fired a shot at the net. Rask, scrambling to get back to the other side of the goal, stuck up his right foot and knocked away what looked like a certain score.

“You see that develop,” Rask said. “The guy was kind of slowing down on the wing, was driving the net wide, and made a good play, but I just happened to extend my leg there.”

Another crazy stop for Tuukka Rask in OT – this time on Kevin Hayes. pic.twitter.com/oMqQvJK5nN

“Tuukka was there for us,” Cassidy said. “He had some tough luck around the net, some backdoor plays he had really no chance on. I thought he played great in the overtime shootout, quality chances….

“But again — Tuukka, outstanding in overtime and shootouts. He’s been lights out in those — so good for him. Last year, we couldn’t win one to save our lives, now we’ve won two of them. Go figure.”

Rask noted the Bruins’ newfound success in shootouts as well.

“It feels good to win those games, obviously,” he said. “If it’s a tie game going to a shoot out, as a goalie, you’re just trying to give your team a chance to win, and this year we won two more than last year altogether I guess.” 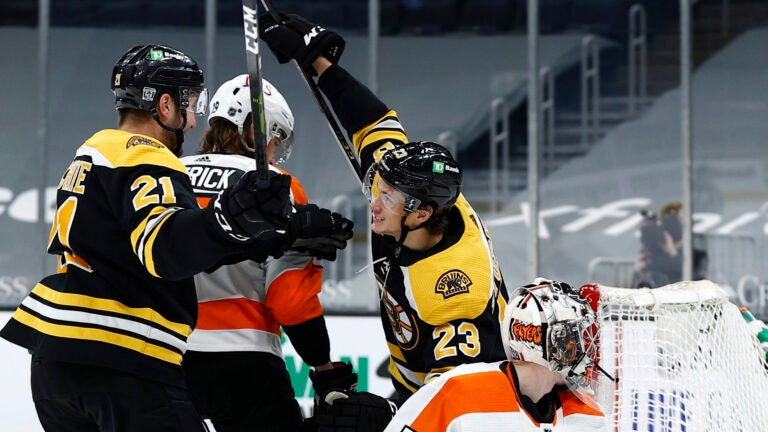