The Boston Bruins could get star winger David Pastrnak back as early as Saturday, according to coach Bruce Cassidy.

Pastrnak’s return can’t come soon enough, as Boston has to deal with a lack of players at the right wing. Jake DeBrusk went down in the second period and was later ruled out with what the team called a “lower-body injury” in Boston’s 3-2 victory over the Pittsburgh Penguins on Tuesday.

Cassidy wouldn’t expand beyond that diagnosis on his Zoom call with the media after the game.

“I’ll call [DeBrusk] day-to-day because I don’t know anything else,” Cassidy said.

If DeBrusk misses more extended time, Boston will have some decisions to make. Cassidy doesn’t anticipate Pastrnak will return on Thursday, so if DeBrusk is forced to miss extended time, the Bruins will need to figure out whether they would rather call a player up or simply get by with players already on the roster (Cassidy noted that Karson Kuhlman has played on the right wing before).

“We’ll see how Pasta is progressing,” Cassidy said. “All reports are it’s coming along well. I don’t think Thursday would be an option for him, so then you start thinking, if he’s ready shortly after that, do we just go with the guys who have been skating with us, make do for a game, plug a guy in maybe a little bit out of position, or do you call a guy up? That’s a discussion we’ll have to have tomorrow, depending on how Jake feels in the morning.”

The Bruins avoided further injury damage in the fourth quarter — goalie Tuukka Rask is fine after he appeared hobbled following Pittsburgh’s second goal. Per Cassidy, other Bruins players checked on Rask and confirmed that he was okay.

“Clearly looked good in overtime,” Cassidy said. “Good for him, I thought he battled hard tonight, was excellent.”

The Bruins have maintained their status well waiting for last year’s leading goal scorer to return — at 4-1-1 with nine total points, Boston is second in the East trailing only Washington. Getting Pastrnak back will be a big boost.

“Once you’re in full contact, that’s the last step is to be able to wake up the next day, take contact and really not have any residual effect from that other than maybe just being sore from taking contact,” Cassidy said. ” … That’s usually the gauge and how far out he would be, how many days of contact, again, would be between the medical staff and him. But like I said, once you’re in that jersey, you’re not that far off.” 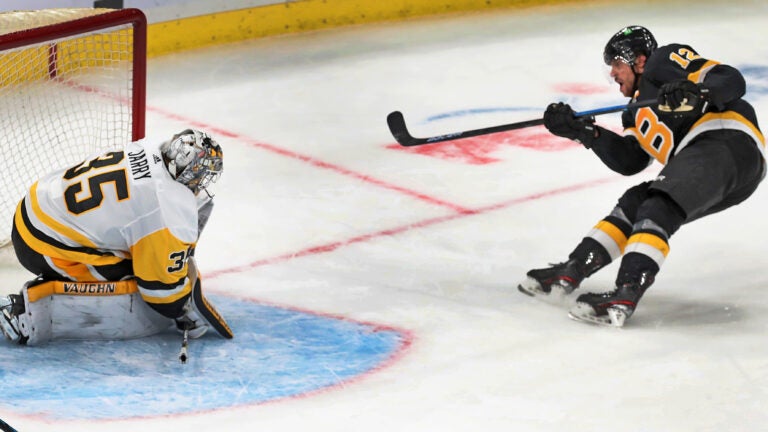