Without one of the leading goal scorers in the league a year ago and Zdeno Chara and Torey Krug departing for new homes, the Boston Bruins entered their first seven games hoping to tread water.

Or so we thought.

On a night where they honored Bishop Feehan’s A.J. Quetta following his unfortunate collision a couple of days prior, the Bruins improved to 5-1-1 following a convincing two-game sweep over the Pittsburgh Penguins.

Come Saturday, the Bruins may have David Pastrnak’s services again when they travel to Washington to face Chara and the Capitals. In the meantime, here’s what we learned from their 4-1 victory over Sidney Crosby and the rest of the Penguins.

The fourth line set the tone against Crosby trio

With Jake DeBrusk out Thursday after sustaining a lower-body injury in the first period two nights prior, Bruce Cassidy once again needed to move some pieces around his four forward groups. He kept one trio intact, however: The fourth line.

Bjork, Wagner and Kuraly made their efforts worthwhile on the offensive end. The line factored into Boston’s pair of first period tallies to set the tone for the evening.

Capping off a stellar checking line shift, Wagner kicked things off, firing home a rolling puck from the slot past Tristian Jarry to give the Bruins a 1-0 lead 6:10 in.

An incredible shift by the Sean Kuraly line against the Sidney Crosby line led to Chris Wagner’s goal: pic.twitter.com/lYsVYYdch3

Codi Ceci evened things up with his first of the year after skating into the slot scot-free against Jaroslav Halak at 15:03. Kuraly answered a mere 3:50 later, tipping in a double deflection on Bjork’s shot attempt — and off of a rear-end of a Penguins defender — to put the Bruins ahead for good.

“They’re well-liked in the room,” Cassidy said. “When those guys score, I think it always lifts the bench.”

Wagner and Kuraly welcomed a handful of linemates over their two-plus years skating together. Whether they’re skating with Bjork, Trent Frederic, or other bottom-six commodities, Cassidy and the coaching staff rely upon the fourth line to deliver gritty efforts against opposing top lines in even strength and penalty-kill situations.

The Bruins, with Patrice Bergeron adding a pair of tallies (at 8:13 of the second and a power play marker 1:40 into the third), fed off the energy from the popular fourth line en route to their fourth-straight win on Thursday.

“Those guys have to do a lot of the dirty work — D-zone starts, the penalty kill and some of the other stuff that doesn’t show up on the scoresheet,” Cassidy added. “They’re always playing against top players, but I think they’re doing a good job, and again it’s nice for them to get on the scoresheet.”

Patrice Bergeron buries his second goal of the evening.

Charlie McAvoy — up with the top power-play unit — gets the secondary assist.

Pastrnak’s injury and the roster turnover on the blue-line put the Bruins in a tough spot for the first few weeks of the shortened 2020-21 campaign. A tough season-opening road trip resulted in an opening night win over the Devils before dropping a pair against the same New Jersey bunch and the New York Islanders.

The Bruins returned to TD Garden hoping to find a rhythm, especially at even-strength. Yet, the uninspired play returned for the first 40 minutes of their home opener against the Flyers.

Cassidy called his team out as the Bruins entered the second intermission with a two-goal deficit against Philly one week ago. They responded with a scoring barrage, scoring four in the third before earning a thrilling shootout win.

The Bruins haven’t looked back. A convincing 6-1 win over Philly and their recent two-game sweep of Pittsburgh followed.

“Everyone was talking about the 5v5 scoring at first. We knew the floodgates were going to open eventually, and we’ve been solid defensively all year” Wagner said. “Once you start in the ‘D’ zone, you know the ‘O’ zone is going to come eventually too.”

Cassidy’s bunch outscored Philly and Pittsburgh, 18-8, during this four-game run. The Bruins scored 10 of those 18 lamplighters at even-strength — including Craig Smith’s winner in the 3V3 OT Tuesday — while allowing just 88 combined shots on net.

They didn’t end the homestand completely unscathed with DeBrusk departing Tuesday’s game and Matt Grzelcyk — returning from a two-game absence — leaving during the second period of Thursday’s tilt with a lower-body ailment. But the Bruins, with Pastrnak’s return looming, have momentum heading into their next four-game trip.

Bruins win one for A.J.

Tonight was for A.J. pic.twitter.com/48n9U4fmWM

The local hockey community felt shocked upon hearing the tragic events surrounding Quetta. The Bishop Feehan senior was hospitalized on Tuesday after crashing into the boards headfirst during the Shamrocks’ tilt with Pope Francis in West Springfield.

The Bruins joined in on the heartwarming support for Quetta on Thursday. They began the day announcing a minimum $100,000 donation from the Jacobs family and the Boston Bruins Foundation for Quetta’s recovery efforts. Before the game, Brad Marchand took the honors of hanging Quetta’s No. 10 sweater on Boston’s bench.

Keeping AJ10 with us tonight. pic.twitter.com/gxvzjaZfKz

Marchand echoed the team’s support during his postgame Zoom session. Before that, Wagner began his press conference with a tribute to Quetta.

“Before we talk about tonight’s game, I just want to say we’re all praying for A.J. This is way bigger than hockey. It was just a freak accident,” said Wagner, a native of Walpole. “Our team is obviously thinking about him, his family, and anyone affected. It really makes us think how fragile our careers are and how life is, and we just wanted to say that we’re praying for him.”

The local community leaned on the Bruins to help guide them through other tragic events in the past. On Thursday, the Bruins were happy to oblige again, winning one for the Quetta family.

“We just wanted to show that we were thinking about him…It’s a very tough thing to see, especially for a young kid to have to go through that. I can’t imagine what the whole family is going through,” Marchand said. “We just wanted to let everyone know that we’re behind him and we’re there to support him and support his family.” 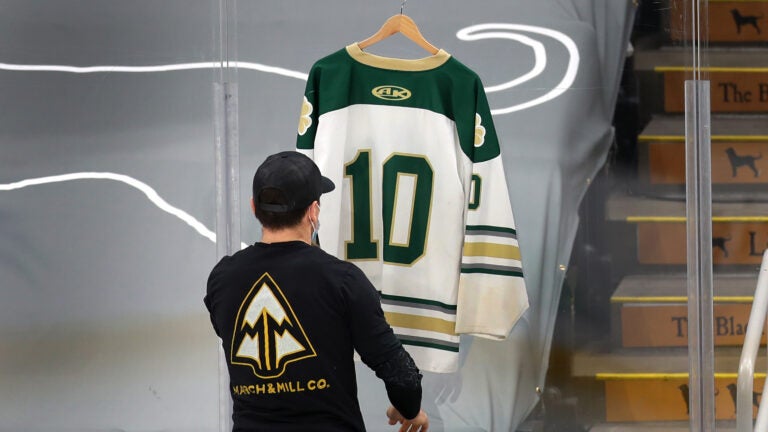